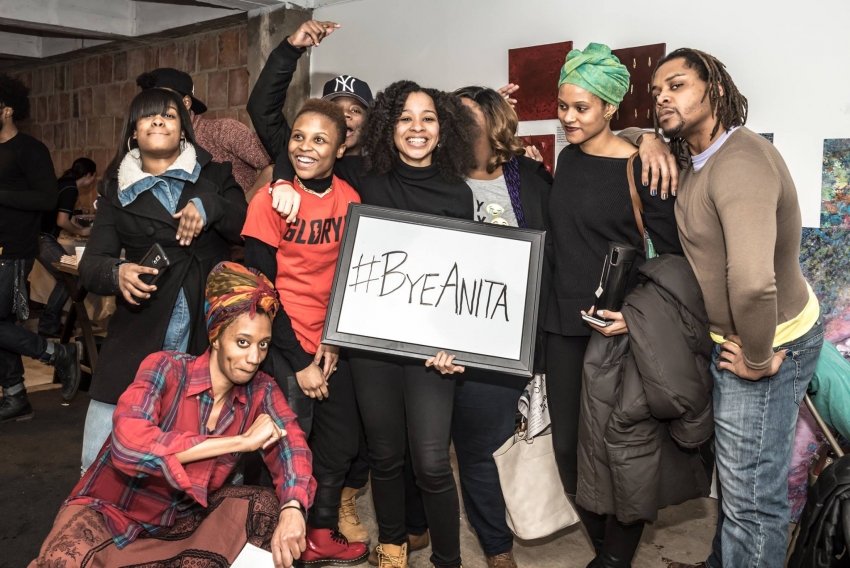 By organizing youth of color in the city around a transformational racial justice program, and by relentlessly participating in actions highlighting what they see as a broken criminal justice system led by Alvarez, these groups helped create the political space for Foxx’s campaign to grow into a city-wide movement to unseat an incumbent prosecutor in a primary—a remarkably unusual feat.

In the minutes after Chicago media outlets called the Cook County State’s Attorney’s race for Kim Foxx on Tuesday night, a young African-American man wearing a t-shirt reading “Adios Anita” took the stage at her victory party, beaming, chanting out to the exuberant crowd “two down, one to go!”—a reference to the firing of former police chief Garry McCarthy as well as Foxx’s ousting of Anita Alvarez, both coming in the wake of the video release of Laquan McDonald’s killing by Chicago police officer Jason Van Dyke.

And much of the crowd at Foxx's celebration joined in, chanting right along.

It was a fitting moment for a campaign that benefited enormously from the organizing work of African-American youth and racial justice groups in the city, who made removing Alvarez from office a key goal in the lead up to Tuesday’s Democratic primary, in which Foxx won 58 percent of the vote to Alvarez’s 29 percent. (A third candidate, Donna More, took 13 percent.) Foxx now looks ahead to an almost certain win in the fall general election against a Republican nominee.

Alvarez came under fire following the disclosure of the McDonald video, which the city held onto for over a year until a judge ordered it released to the public. It wasn’t until the court order that Alvarez chose to finally charge Van Dyke for McDonald’s murder—a full 13 months after he shot the unarmed 17-year-old African American 16 times.

The video, released last December, led to weeks of street protests, blocking traffic, disrupting commerce in some of the busiest commercial areas in the city and putting Chicago in the national spotlight in the growing debate over police violence and criminal justice.

One of the primary demands voiced at the protests was the removal from office of McCarthy, Alvarez and Mayor Rahm Emanuel—all accused of participating in a cover-up to conceal the McDonald video to avoid the kind of uproar that happened in places like Ferguson and Baltimore following similar police killings of unarmed African Americans.

Most of these protests were led by groups of young African-American activists and organizers, such as Black Youth Project 100, Assata’s Daughters and We Charge Genocide.

These groups and many of their members had previously helped achieve major victories for racial justice in Chicago, including the passage of a bill providing reparations for victims of police torture and, most recently, the planned construction of a Level I trauma center on the city’s south side Hyde Park neighborhood to provide emergency care for victims of gunshot wounds and other life-threatening conditions.

Both of those victories were the result of multi-year campaigns and required dogged determination. Foxx’s win is yet another victory for which these groups can rightly claim much credit.

Of course, Foxx also owes much of her victory to the hard work of her team of staff and volunteers—dubbed “Team Foxx”—as well as the support of Cook County Board President Toni Preckwinkle, progressive groups like Grassroots Collaborative and United Working Familes, and major endorsements ranging from the Chicago Tribune and Sun-Times to Sen. Dick Durbin.

But by organizing youth of color in the city around a transformational racial justice program, and by relentlessly participating in actions highlighting what they see as a broken criminal justice system led by Alvarez, these groups helped create the political space for Foxx’s campaign to grow into a city-wide movement to unseat an incumbent prosecutor in a primary—a remarkably unusual feat.

And they helped lead a savvy social media campaign using the hashtag #ByeAnita to draw attention to Alvarez’s long history of allegedly protecting police officers accused of misconduct and routinely violating the rights of African Americans in the criminal justice system.

While none of these groups explicitly endorsed Foxx, they did work diligently to make sure Chicagoans did not vote for Alvarez. Brenna Champion, an organizer with BYP100, said that the group canvassed, knocked on doors throughout the city with their anti-Alvarez message and reached out to 2,500 voters who planned to vote for Foxx, focusing on African-American voters, largely on college campuses.

Foxx promises to be a much more progressive prosecutor than Alvarez. As reported by In These Times editor Micah Uetricht, she has called for an independent prosecutor for every case in which a citizen is shot by a police officer, citing a conflict of interest in the state’s attorney’s office prosecuting Chicago police. And she both opposes mandatory minimums for gun crimes and wants to end the “school-to-prison pipeline.”

Damon Williams, an organizer with BYP100, tweeted on Tuesday night: “This is a really important win for Chicago that will set a tone and shift conversations throughout America…The Laquan McDonald conversation only happened because young people organized. People were motivated to vote because people took the street.”

Indeed, as Darryl Holliday reports for Chicago magazine, BYP100 is “fast emerging in the wake of the McDonald firestorm as the most vocal and arguably most effective activist group in town.”

And the group Assata’s Daughters said in a statement: “Chicago Black youth kicked Anita Alvarez out of office. Just a month ago, Anita Alvarez was winning in the polls. Communities who refuse to be killed and jailed and abused without any chance at justice refused to allow that to happen. We did this for Rekia. We did this for Laquan. We won't stop until we're free and Kim Foxx should know that well.”

The statement makes clear that they plan to keep the heat on Foxx, and any elected official, who is in a position to dole out justice. And while two are now down—McCarthy and Alvarez—there is one major target left: Rahm Emanuel.

Chicago’s mayor appears a much more difficult official to unseat. But judging by this movement’s recent successes, it shouldn't be counted out.