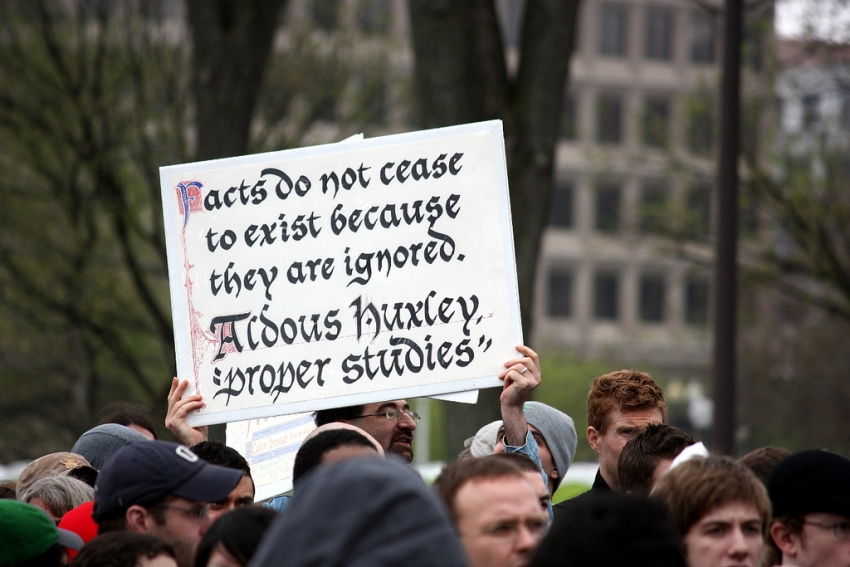 Attendees at the 2012 Reason Rally in Washington, D.C. (Kordite / Flickr)

The “Reason Rally” features Bill Nye, Margaret Cho, Wu-Tang Clan and others as secular groups borrow playbooks from the LGBTQ movement and the Religious Right.

"We're speaking up for reason."

They may be the most invisible interest group in American politics: secular Americans who now make up nearly a quarter of the American population, according to recent Gallup and Pew Research polls. But attendees of the “Reason Rally” at the Lincoln Memorial on Saturday, where as many as 30,00 atheists, agnostics, freethinkers and their allies are expected to attend, want to see that change.

The rally will feature dozens of entertainers, authors, scientists and even a few members of Congress—everyone from comedian Margaret Cho and NASA scientist Carolyn Porco to Bill Nye and members of the Wu-Tang Clan—and will promote scientifically-based policies in public life. They aim to push back against the Religious Right, weakened after the Supreme Court decision legalizing gay marriage but which still wields enough power to preserve and expand anti-gay laws, further restrict women’s reproductive choices and keep in place federally-funded abstinence programs that actually increase pregnancies.

The rally aims to celebrate the growth in numbers of the “nones”—secular and unaffiliated Americans—to almost 60 million and their potential political clout, joined with calls to return scientific evidence to public life. “We're speaking up for reason,” says Lyz Liddell, the executive director of the Reason Rally Coalition composed of leading atheist, secular and humanist organizations. “We want reason to be the core of public policies rather than religious ideals.”

The previous rally in 2012 drew over 10,000 people in the pouring rain to a gathering likened to a “Woodstock for Atheists.” Like that previous event, this new one promises to be a “coming-out party,” says Paul Provenza, a comedian, TV host and co-director of the scabarously hilarious film The Aristocrats, who was the master of ceremonies for that event and will co-host this new one. “We are finding a community and celebrating to choose what we believe based on reason and not on fairy tales.” (Hear the full-length In These Times interview with Provenza about comedy, atheism and the Reason Rally here.)

But there has been an important shift in emphasis since that 2012 event —and the mounting attacks against religious believers by New Atheists such as Sam Harris—that led to a pushback even from sympathetic progressives over the “militant atheism” adopted by some speakers, notably the influential British scientist Richard Dawkins. He told the atheistic faithful, “Religion makes specific claims about the universe which need to be substantiated and need to be challenged and, if necessary, need to be ridiculed with contempt”—and, apparently by extension, those who hold such religious views dear.

A thoughtful article in the arts magazine Quietus pointed out the political risks posed by the aggressive tone of some other speakers, among them American Atheists president David Silverman, and the comedians, such as Eddie Izzard, at the 2012 rally: “Was this really an attempt, on any level, to communicate with the theists this movement will somehow need to convert over the course of the coming generations?”

Now, even staff working on Saturday's new Reason Rally concede the need to strive for more inclusivity. Chief organizer Lyz Liddell observes, “The 2012 rally was brazen and not afraid to approach religion in a straightforward way.” She acknowledges, though, an emerging difference in tone in the movement and the upcoming rally. “The secular community has grown in recognition and acceptance, and the tone we're setting is more cooperative. We're not going to treat religion with kid gloves by any means, but to reach our bigger goals of bringing reason to public policy and creating a reasonable society, we need to come together with a couple of religious groups.”

To demonstrate that the secular community's new big-tent approach is already at work, she points to appearances at the Saturday rally of two members of Congress with religious ties, Rep. Tulsi Gabbard (D-HI), a Hindu, and the church-going Rep. Bobby Scott (D-VA), and a rising progressive star, Congressman-elect Jamie Raskin of Maryland, a synagogue member. Citing religious terrorism and climate change, Raskin, a professor of constitutional law at American University, said, “It is time for all Americans to stand up for our most essential public values against science deniers and theocrats all over the world.”

This broader perspective can help bring in new allies. Yet showing that “we are unaffiliated and we vote” —a theme of the 2012 rally—remains a key goal of the Reason Rally Coalition and an allied two-day lobbying effort visiting every member of Congress to support Sen. Cory Booker's (D-NJ) Real Education for Healthy Youth bill requiring federally-funded sex education to be LGBTQ inclusive and to ban abstinence programs.

While it's unlikely to pass under this Congress, Liddell notes, it's all part of a secular campaign—including this week's rally—to increase the political impact of nonbelievers: “We're really demonstrating the fact that the secular demographic group is organizing, and I think we're going to see elected officials to start to reach out to our community, to solicit our votes and to listen to our issues.”

Ironically, part of that strategy, she and Larry Decker of the Secular Coalition say, is to learn from the successes of their polar opposite: the religious right.

“We want to focus on issues where our demographic agrees on desired outcomes and then mobilize them,” she says. “We can totally learn from that.” Decker is impressed by the ability of a vocal minority of religious people—hard-line conservatives—to have an outsized impact on policy. “The Secular Coalition is going to take a page from the playbook of our major detractors,” he says. “We're going to start talking about values, too,” citing such broadly resonant values as Equality, Knowledge and Inclusiveness.

At the same time, the rally will still give prominent speaking positions to self-described “firebrand atheists” such as David Silverman, author of the new book, Fighting God: An Atheist Manifesto for a Religious World, who told the 2012 rally, “Confrontation works” and argued for a “zero-tolerance” policy towards anyone expressing bigotry against atheists. Yet, as Paul Provenza points out, the aggressive actions of people like David Silverman to confront bigots and prod atheists to “come out,” has parallels to the gay rights movement: “It's like ACT UP,” the gay group that forced a wider public in the 1980s to pay attention to the AIDS crisis through direct action. Yet that's now supplemented by Silverman's group with an impressive array of lawsuits to preserve the separation of church and state. Silverman, Provenza and a wide range of moderate and radical figures in the secular community also talk about “coming out” as an atheist.

And the comparison to gay pride isn't as far-fetched as it might seem at first. In many ways, the freethinkers are explicit about the parallels to the gay movement. The Openly Secular website, for example, urges secular people to go public with their views. On its YouTube channel, noted entertainers and celebrities such as former SNL actress Julia Sweeny talk about being rejected by family and friends after confessing they were atheists. Secular people in America haven't faced nearly the horrifically violent bigotry and attacks that have long victimized gays, but overseas, people face harsh retaliation and death for daring to express doubts about religion. In Bangladesh, for example, secular bloggers and activists have been killed with impunity.

Yet even in America, discrimination, shunning and harassment are real and can lead to suicides. As the Openly Secular site notes, “Discrimination is rampant against those who are secular. Teens are made homeless after being thrown out of their homes; young activists receive death threats; people lose relationships with friends, family and coworkers for not believing the same.” The penalties can be especially severe for young secular students opposing religious symbolism in the schools, such as atheist Jessica Ahlquist, who filed a successful lawsuit in 2012 against her high school in Rhode Island for displaying a prayer mural—and needed police escorts after death threats against her, joined by attacks by local media and elected officials.

Sadly, little has changed since then: In 2014, a 21-year-old atheist college student in Mobile, Alabama, Amanda Scott, dared to lead the opposition to the county commission's plan to display an “In God We Trust” plaque in the Mobile Government Plaza. After granting local press interviews, she received dozens of threatening messages from fellow citizens calling for her torture and death. The county moved ahead with its plaque, but Scott stuck to her guns and was honored as “Atheist Activist of the Year” in 2015 by American Atheists. “I was just doing what I felt I had to do, which was to stand up for the separation of church and state and the equal rights of atheists in our community,” she said.

It's little wonder that Decker, an openly gay man who recently became the Secular Coalition's executive director, has found that the sting of bigotry against nonbelievers can sometimes be as strong as that facing gays. Indeed, after a speech he gave in a conservative Southwestern town earlier this year, a middle-aged woman approached to give him a hug of thanks and then started telling him about the fate of her nephew. She cried as she told him that he came out as gay at age 18 to his evangelical parents who were deeply upset, telling their son they had a big problem with it and tried, over time, to figure it out.

“But at 19, when he came out as an atheist, his parents cut him off,” she said. He was living outside the home, and they declared they could no longer be part of his life. “Then he killed himself,” she told him.

“Larry, if he could have seen you speak today, he never would have done that.” At that, Decker turned away and started crying, not wanting her to see him weeping. “I knew at that moment I did the right thing in taking this job,” he says.