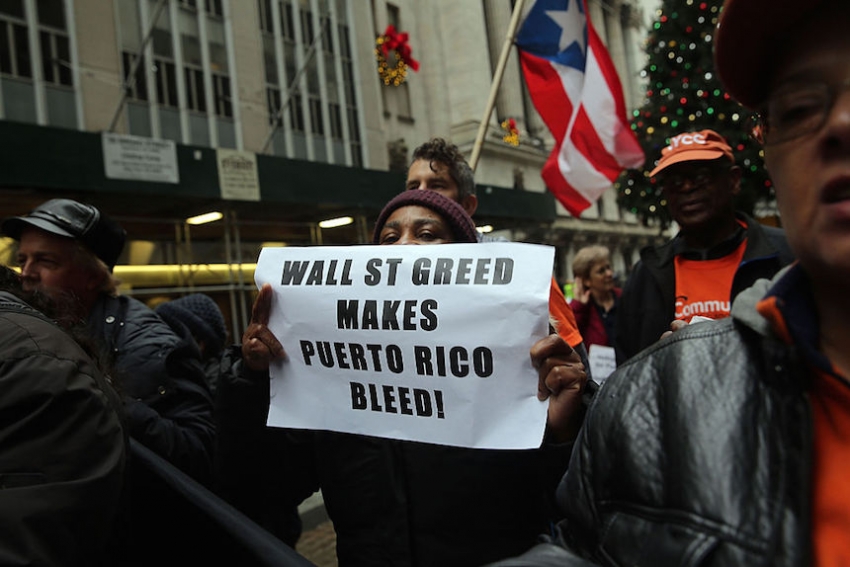 Protesters against the austerity measures in Puerto Rico march on Wall Street on December 2, 2015. The Commonwealth has cut services to meet payments on high-interest loans. (Photo by Spencer Platt/Getty Images)

With interest rates of 785 percent, the island got stiffed by the municipal equivalent of a payday loan

It is downright immoral to force them to endure pain and suffering so that investors can be paid triple-digit interest rates and get quadruple-digit returns on their investment for deals that may be illegal.

Puerto Rico defaulted on nearly $2 billion of debt payments this morning, including $780 million in constitutionally-guaranteed general obligation debt, almost exactly a year after the New York Times reported that Governor Alejandro García Padilla had declared that the island’s debt “not payable.”

Without a doubt, the debt is not payable because the Commonwealth cannot pay all of it. The Commonwealth’s per capita tax burden of $15,637 is more than 10 times higher than that of the average state ($1,419) and nearly three times higher than that of the highest state (Connecticut, with $5,491). But just as importantly, Puerto Rico should not pay everything that gets included in its total outstanding debt because much of that debt is illegitimate.

The ReFund America Project released a report yesterday, called Puerto Rico’s Payday Loans, that shows that $33.5 billion of the island’s so-called debt is actually interest on capital appreciation bonds (CABs)—the municipal version of a payday loan. The Commonwealth borrowed $4.3 billion in principal and has to pay it back with 785 percent interest. Moreover, because of the way these deals are structured, most of the $33.5 billion is interest that hasn’t even accrued yet. It is future interest. In other words, this is not money that anyone actually lent to Puerto Rico. It is pure investor profit.

Furthermore, 63 percent of Puerto Rico’s CAB debt belongs to its Sales Tax Financing Corporation, more commonly known by its Spanish acronym of COFINA. The COFINA structure was created to refinance what was considered at the time to be “extra-constitutional” debt—a term that no one has ever defined, but that sure doesn’t sound very legal. Although the Puerto Rico Commission for the Comprehensive Audit of the Public Credit’s Pre-audit Survey Report did not discuss COFINA bonds specifically, it alluded to the fact that there could be potential grounds for legally voiding some or all of this extra-constitutional debt.

Finally, Puerto Rico’s CAB debt is currently trading on the secondary markets for as little as 5 cents on the dollar. That means that some of the bondholders who now own the debt bought it for 5 percent of its face value, but they still want to be paid back the full face value. The reason why they were able to buy the debt at such steep discounts was that the previous bondholders had already written down the loans as bad debt. They did not expect to be paid more than 5 percent of the principal, so they sold it to vulture hedge funds and other creditors who are now looking to make a large profit of as much as 1,900 percent.

Bondholders are trying to make such excessive profits at a time when Puerto Rico is in the throes of a devastating humanitarian crisis that is being exacerbated by the austerity measures put in place to enable the island to pay back its debt. It is bad enough to force the people of Puerto Rico to endure unconscionable cuts to pay off creditors. It is downright immoral to force them to endure pain and suffering so that investors can be paid triple-digit interest rates and get quadruple-digit returns on their investment for deals that may be illegal.

These principles are a first step in ensuring that Wall Street investors are not able to profiteer off the CAB debt on the backs of the people of Puerto Rico. Legally and morally, that debt is not payable.

Cross-posted at the Roosevelt Institute Blog.