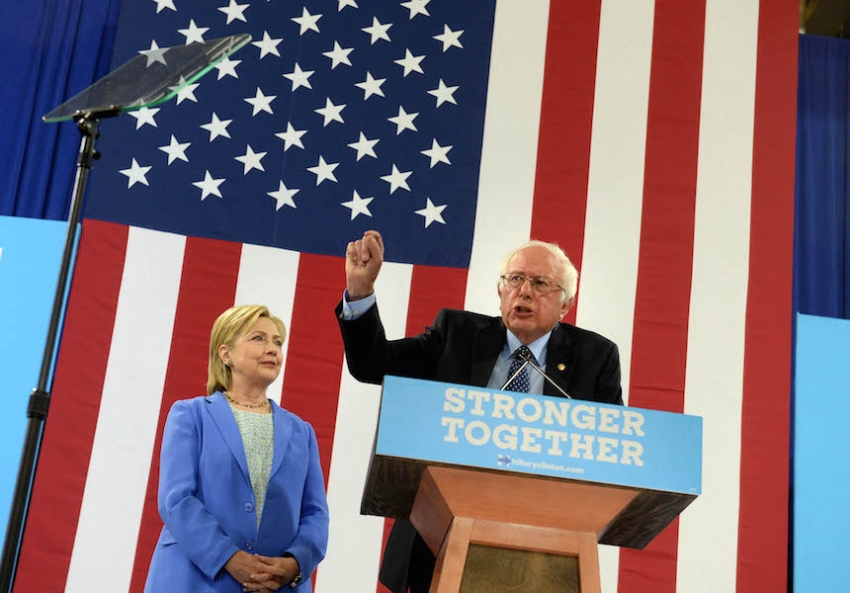 On July 12 in Portsmouth, N.H., Sen. Bernie Sanders endorses Hillary Clinton for the Democratic nomination. But the fight to advance Sanders' progressive policies is far from over. (Darren McCollester / Getty Images)

Now that Sanders has declared his support for Clinton, a senior Sanders campaign advisor maps the road ahead.

In the next two weeks, Bernie Sanders will begin to describe how his massive organization of millions can function beyond this moment and help build a movement for social and economic change.

A few hours ago, Bernie Sanders announced his support for Hillary Clinton for Democratic presidential nominee. It’s a moment both to take stock of our gains and to think ahead. Sanders’ insurgent campaign has made a remarkable impact, but the political revolution it started is far from over.

This weekend, the 187-member Democratic Platform Committee cleaned up some sections of the draft platform, but there is no mistaking the results for the political revolution.

The clean-up was significant, improving language on climate change, trade policy and healthcare reform. Most significantly, the demands now include Sanders’ calls for a public option, a $15 minimum wage, and free tuition at public universities for families with incomes under $125,000 a year.

Not that the initial version, produced by the 15-member Platform Drafting Committee on June 25, lacked good points. It included planks on ensuring voting rights and getting money out of politics, expanding the post office to check cashing and other financial services, and passing a modern Glass-Steagall Act to separate investment and commercial banking. The drafters also called for significant investment in infrastructure and renewable energy, the abolition of the death penalty, and expanding rather than cutting Social Security benefits (though they were vague on how to pay for that).

After a year on the road with Bernie’s campaign, I am proud of all of this, but yearn for what may have been: not just a better platform but the political revolution writ large as Sanders vs. Trump, a working-class candidate versus a billionaire.

While the platform is likely the most progressive ever, with enormous thanks to Bernie and his supporters, it will likely stop short of satisfying the tens of thousands who campaigned for him and the 12 million who voted for him.  There is no proposal to end fracking; Medicare for all was voted down; and the platform does not support an end to new Israeli settlements in Gaza or the West Bank.

The section on trade is in many ways the most disappointing. Unlike the other platform goals, which require a progressive Congress—at best years away—trade is initiated by the president. Right now, that president is a Democrat who is counting on the Republicans to provide most of the votes for his Trans-Pacific Partnership (TPP) trade deal, which will cost millions of American jobs and accelerate the global race to the bottom.

Increasingly it seems that President Obama, determined to pass TPP as part of his legacy despite overwhelming opposition from Democrats and skepticism from the American public, sees the post-election lame duck session of Congress as his best chance. Fast-track for the TPP, passed a year ago by the Republican Congress, allows President Obama discretion to send it to Congress and then requires an up or down vote in the Senate and the House within 90 days. That gives Obama two options: If he sends the TPP to Congress in early September, Congress will be required to vote before adjournment at the end of the year. If he waits until November, it will be up to the Republican leaders to bring it to a vote in lame duck or let the clock run out.

While the trade language adopted on Saturday is far better than that in the initial platform draft, including general opposition to corporate-oriented trade, the failure to explicitly oppose the TPP means the president will be able to lobby Democrats to vote for the TPP without violating his own party’s platform. Since some Republicans oppose the TPP, those Democratic votes could be decisive in securing lame duck passage. Meanwhile Donald Trump can claim that his opposition to the TPP is clear and that Hillary Clinton is only talking about opposing the deal and not acting when it counts.

The Sanders delegation will now pivot from the platform to the Democratic Party rules—issues like eliminating the nominating power of “super” delegates.  The Rules Committee meets next week, and once again the debate will be about change vs. continuity and the populist moment vs. the party establishment.

The future of the political revolution, however, goes far beyond the platform, rules, convention or even the 2016 election.  In the next two weeks, Bernie Sanders will begin to describe how his massive organization of millions can function beyond this moment and help build a movement for social and economic change.  Bernie’s revolution has brought us much further than anyone expected. Who would have ever believed the stated objectives of the Democratic Party would include a public option or free tuition? The question for millions of Bernie supporters is how to keep this going both inside and outside of the party, in the Congress and state legislatures, but also in the streets.

Larry Cohen chairs the board of Our Revolution and is a member of the Democratic National Committee, vice-chair of the Unity Reform Commission, and member of the 2020 convention rules committee. He is the past president of the Communications Workers of America and was a senior advisor in the Bernie 2016 campaign.