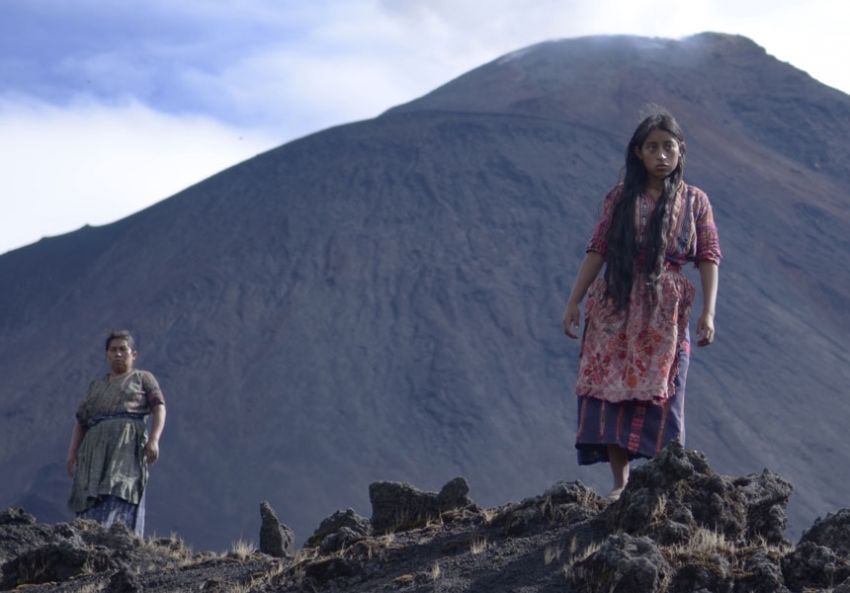 Maria (María Mercedes Coroy) jumps over rocks in an attempt to induce an abortion, gazing out at the world beyond the volcano. (Photo by Julie Romano)

[Maria's] eventual tryst with a soused Pepe behind the local gin joint is her idea—leading to, of course, a pregnancy that threatens to destroy her engagement and get her family ousted from the farm.

One of the first things you see in the Guatemalan film Ixcanul is recalcitrant pigs guzzling rum, fed straight out of the bottle by a Mayan Indian mother and daughter in the hopes that it'll make the animals horny. It's just a detail, but it speaks volumes about the tiny world we've dropped into—a thicket of improvised survival and oppressive traditions. Subsisting in the shadow of a black volcano (ixcanul, in the Mayan language of Kaqchikel, a term that literally translates “the internal force of the mountain which boils looking for eruption”), to which they still make regular offerings, the family lives the way rural families have in Central America for centuries. The modern world, and America, wait unseen, beyond the volcano.

But Jayro Bustamante, the 39-year-old debut director—who grew up in the region and identifies as mestizo, though not Mayan—isn't interested in simplistic dichotomies, and the film has its own contemplative and slow-boiling personality. The focus is on the 17-year-old daughter, Maria (María Mercedes Coroy), a placid, watchful girl for whom her aging parents have old-fashioned hopes: get married, have children. A good marriage for Maria is what her mother literally asks the volcano for, while working their threadbare farm and picking coffee beans on the local plantation. Maria does not rebel, and without saying much rolls along with an arranged engagement, to an upwardly mobile young manager for the coffee growers, Ignacio (Justo Lorenzo), a widower with young children.

Still, Maria has other ideas, disrobing for a drunk farmworker named Pepe (Marvin Coroy), who aims to flee north to the United States, and even losing herself lustily in the forest, gently grinding against trees. She seems to be virtually the only girl around, and her eventual tryst with a soused Pepe behind the local gin joint is her idea—leading to, of course, a pregnancy that threatens to destroy her engagement and get her family ousted from the farm.

Maria and her mother, Juana (María Telón), urgently try to induce an abortion just as a large area of the plantation becomes unplowable due to a poisonous snake infestation, and both problems become commingled with folklore. Maria's pregnant belly makes her “magical,” her mother tells her in a communal shower; could the snakes be chased away by her aura? The attempt to do so leads to a tragic confrontation with civilization, where speaking an indigenous language makes you an outsider, and where innocence makes you an oblivious victim.

Ixcanul is not a very dramatic film—Bustamante keeps his reveals low-key and Maria's motivations mysterious. Often, pivotal story decisions are made off-screen, mustering a sense of unspoken cultural congruence between the characters. In addition, there's a gritty art-film taste for watching work and endurance in real time (you could learn basic skills, including pig butchering), and the movie's visual palette is full of gorgeous, crepuscular shadows. But the people fuel the film—the entire cast are not only non-professionals, but are all Mayans recruited from the region, and certainly seem to have worked hard in the characters' way of life long before the filmmaker showed up. Everybody seems comfortable in front of the camera, particularly Coroy, whose full features and big, dreamy eyes leave an unforgettable impression—she lingers as the face of Central American peasant women, stuck between the past and the present.

Telón, though, is the emotional protein of the film. For every one of the daughter's passive moments, the mother acts as a never-still engine of action and reaction. Telón's long ride into the city, holding her unconscious daughter in the back of a pickup and wailing in fearful grief, is this year's most gripping piece of screen acting to date.

Touching on multiple feminist issues as it goes, and even venturing, gallingly, into the matter of baby trafficking, Ixcanul can suffer from predictability—Bustamante's desire to universalize Maria's arc sometimes makes it end up feeling familiar. But the film's rhythms, details and visuals, particularly that volcano, are vivid and unique. It's a great serving of what could be thought of as the new “Third Cinema”—the movies made by and about cultures still left scrambling for a voice in a post-colonial 21st century. (Perhaps that idea has little traction in a nation whose media monopoly, including movie theaters, is almost entirely controlled by a single man, the politically powerful Mexican billionaire Remigio Ángel González.) Bustamente's movie, which was independently produced and won the Silver Bear at the Berlin Film Festival last year, may in fact be the first authentically Mayan film the world has seen.