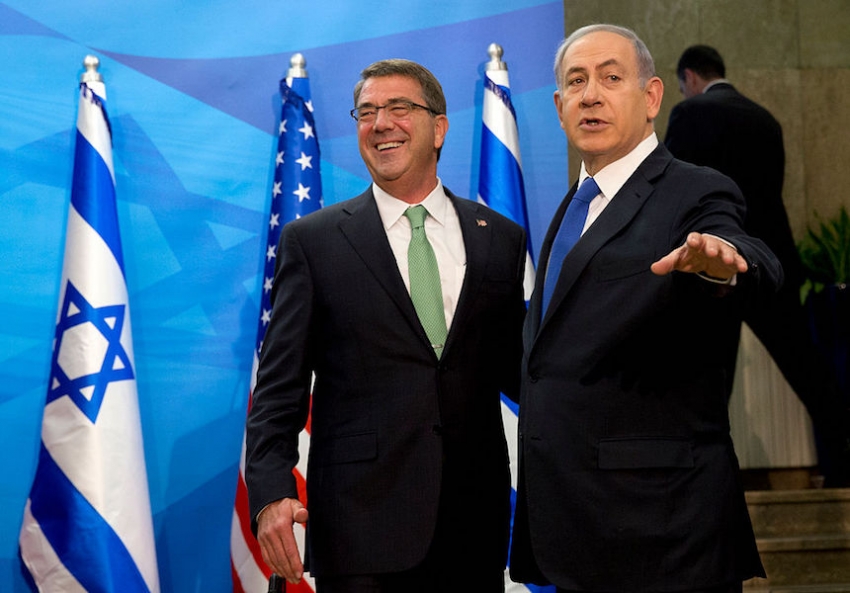 U.S. Defense Secretary Ash Carter is greeted by Israeli Prime Minister Benjamin Netanyahu. The U.S. has promised $38 billion in military aid to Israel over the next 10 years. (Carolyn Kaster/Getty Images)

The Biggest Israel Aid Deal in History Will Bolster Occupation and the U.S. Defense Industry

The White House has described the recent $38 billion promised aid package to Israel, apportioned each year as $3.3 billion in Foreign Military Financing and $500 million in missile defense assistance over the course of 10 years, as an “unshakable commitment to Israel’s security.” A better description would have been the White House’s unshakable commitment to Boeing and Lockheed Martin’s quarterly earnings.

U.S. “military assistance,” more accurately understood as a circular flow through which U.S. weapons firms profit off the colonization of Palestinian land and Israeli destabilization of the surrounding states, is a long-term structuring element of the U.S.-Israel “special relationship.”

Large U.S. military loans started arriving in Israel in 1971, as the Nixon administration rejected plans for a so-called peaceful settlement of the Palestine question and went the path of aiding Israel’s decision to armor itself for perpetual war, the reward to the Israeli military elite for their hammering of Egypt and Syria in the 1967 war.

In November 1971, the Nixon administration signed a quiet Memorandum of Understanding (MOU) with Israel to build up its domestic industrial-arms sector through technical and manufacturing assistance. As the New York Times characterized White House thinking,

Officials said the Administration was willing to help Israel become less dependent on the United States for arms for a number of reasons.

To the extent that Israel could build tanks and planes and other advanced weapons, they point out, there would be less occasion for outcry in the Arab world over shipment of United States arms to Israel.

Grants started to replace loans in 1974. The U.S. government shortly afterwards started to permit Israel to spend twenty-six percent of the annual military grant on purchases in Israel—a unique arrangement, since by law recipient countries must spend all of their Foreign Military Financing in the United States. The result of this has been the build-up of a large Israeli military industry. This industry often relies on U.S. technological inputs, and the United States forbids Israel from manufacturing crucial heavy weaponry, such as fighter jets, in order to maintain control over Israel.

It trusts Israel—a settler-colonial state—with its own weapons industry since the chances of a peoples’ revolt amongst the dominant Jewish sector of the Israeli population is slim-to-none; the weapons will not be turned against the Israeli elite, let alone the United States, as they might one day in Arab countries where revolt is more likely. But it trusts the Israeli elite only so far—for that reason it maintains a monopoly on many of the production lines the Israeli army needs, in order to maintain a veto over Israeli foreign policy.

Furthermore, as the Times suggests, public U.S. military aid can be embarrassing for the Arab states. Several of these states have pretended to be at war with Israel even while maintaining friendly terms with the United States, Israel’s main patron. Although this dynamic was less of an issue after the Camp David Accords with the Anwar Sadat dictatorship in Egypt in the ‘70s, the 1994 peace treaty with Jordan and increasing ties between Israel and the Gulf States, Israel’s colonial repression of the Palestinians continues to be an issue for the surrounding Arab populations. Hence the need for some subterfuge as to who’s actually building Israel’s weapons, and indeed for the United States’ commitment to the peace process—a shadow-play meant mainly for the consumption of the Arab popular classes.

Earlier U.S. military grants, in the 1970s, often went to subsidiaries of U.S. corporations based in Israel, which devoted a significant portion of its budget to developing a trained and educated work-force, capable of aiding in technological development and working in highly-skilled positions in the arms industry.

Later U.S. military grants to Israel were often a quid pro quo, as Israel increasingly took on the work for which the United States could not publicly take responsibility, given popular unease in the States over aid to fascist dictatorships. As the International Jewish Anti-Zionist Network note in their well cited report, Israel’s Worldwide Role in Repression,

In the 1970s, Israel armed the brutal military regime of the Argentinian Junta that imposed seven years of state terrorism on the population, including the torture and “disappearance” of an estimated 22,000-30,000 left-wing activists, trade unionists, students, journalists and other alleged anti-regime civilians.

Of those dead, 10 to 15 percent were Jews, while the overall population was just two percent Jewish. Israel also provided most of the arms that Nicaraguan dictator Somoza used in the last year of his dictatorship to oppose the revolution, a conflict that killed tens of thousands of Nicaraguans. It also trained the Central American torture states in population displacement. And later, it would circumvent the 1977 arms ban against apartheid South Africa.

In return for this mercenary work for the United States, a domestic elite in Israel grew richer, pulling in its cut from the military grants while also profiting from the perpetual state of warfare ensured by the colonial occupation and Israel’s decision to treat those states across its northern armistice lines as enemies to be controlled and destabilized rather than neighbors with whom to trade and live.

Such constant warfare and militarization created a circular pattern. On the one hand, occupation and expansionary violence, such as the occupation of Lebanon, created a constant rightward shift in Israeli politics. It also created a perpetual need for increased military spending, thereby justifying an unusually high portion of the state GDP spent on the military. With Israel hostile to the surrounding states, it developed an umbilical relationship with its primary patron and funder—the United States. In turn the United States benefited continually not just from the Israeli destabilization of the surrounding region, but the overall state of hostility induced with all Arab states.

By the 2000s, the U.S. intravenous feed of funds to the Israeli military-industrial complex had produced an industry capable of competing in small-arms and high-end security technology on a world-scale. Israel started to export the expertise acquired, sharpened, and refined through high-technology colonial policing of the Palestinian population, especially in the Gaza Strip and the West Bank. Up to 150,000 Israeli households rely economically on the arms and security industry.

The new MOU comes amidst a shifting geopolitical environment, both within the United States and abroad. First, there is a shift internal to the MOU. It will slowly phase out the provisions for Off Shore Procurement, through which Israel could spend up to 26.3 percent of its funding package within Israel. The White House is broadcasting this shift as meaning ”that Israel will spend more funding, as much as $1.2 billion per year, on the advanced military capabilities that only the United States can provide.”

It is probably mostly show. Already multiple Israeli military-technology firms have subsidiaries in the United States. Elbit Systems, for example, has one in Fort Worth, Texas. Others will likely follow suit: “The big contractors in Israel will follow Elbit's methods and establish U.S. subsidiaries to work through,” said Liran Lublin, an analyst who covers Elbit for Israel Brokerage and Investments.

Furthermore, portions of the Israeli high-tech industry are the property of U.S.-based entrepreneurs and capitalists. In fact, historically Israel has not been the “albatross” it is often called by many in the U.S. who are uncomfortable with so much support and rapport with the so-called “Jewish state” Since at least 1967, Israel has not merely received investments and gifts from the United States but has continuously sent back profits and dividends to foreign investors.

The MOU is specifically for Israel to “update the lion’s share of its fighter aircraft fleet”—a direct grant to the U.S. military-industrial complex, given that fighter-jet factories are exclusively based in the United States.

The firm establishment of Israel’s Qualitative Military Edge also provides an excuse to sell ever-more-sophisticated weapons to other regional U.S. allies, especially Saudi Arabia. So long as Israel has the “latest” U.S. technology, other countries can buy older models, again to the great profit of the U.S. defense-industrial base. Israel thus is the sparkplug for an entire region-wide weapons bazaar, which not only diverts money that could otherwise go to social needs for the poor in countries like Iraq and Saudi Arabia, but also provides such countries the means to destroy and dismantle even poorer countries like Yemen. This keeps the entire region aflame, oppressed and desperate, and thus unlikely to upset hierarchical regional and international social structures.

The quantity of funding, furthermore, when inflation-adjusted, is not all that much greater than the previous ten-year package. Previously the United States had promised Israel $3.1 billion in annual aid; the newer package is $3.3 billion. The primary difference is that this MOU locks in $500 million annually for missile defense, an amount that used to be the object of annual negotiations.

Perhaps one reason the United States has wished to push through this MOU before Obama leaves office is the rising discontent within the U.S. population over ongoing support for the Israeli colonization of Palestine. Many Palestinian lives will be stunted, in Palestine and elsewhere, and U.S.-based activists (especially Arabs) will be brutalized and maligned, but the Boycott, Divestment, and Sanction (BDS) Movement will not easily be stopped. This MOU creates “facts on the ground.” Much like the Israeli colonization project, such facts are only as strong as the political forces which can defend them. How much strength and endurance these forces have remain to be seen.