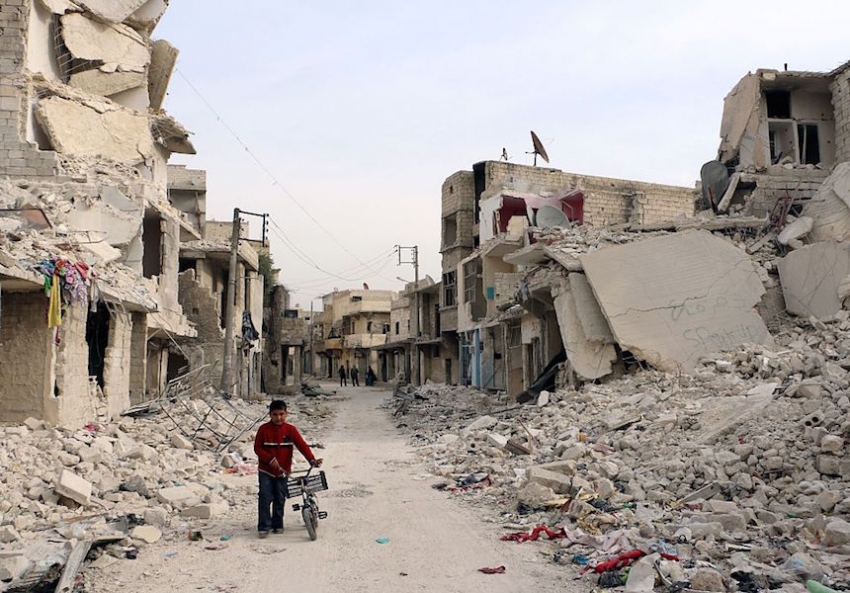 A Syrian boy walks his bicycle in Aleppo in November 2014. (BARAA AL-HALABI/AFP/Getty Images)

From Gaza to Aleppo: A Handy Guide for Defending War Crimes

Or, how I learned to stop worrying and love the bombing of civilian neighborhoods.

By combining segments of statements and resolutions supporting Israel’s “right to self-defense” with certain anti-imperialists’ writings on Syria, I was able to put together the ultimate guide to defending war crimes.

Given the United States’ disastrous record in the Middle East—most critically the invasion and occupation of Iraq—and the manifold lies coming out of Washington to justify its policies, many Americans are understandably skeptical about U.S. interventions and the rationalizations used to defend them. This leads many Americans to oppose both direct intervention in Syria and the arming of rebel factions—and rightly so.

But while there is room for debate on some aspects of the conflict, certain elements of the anti-war movement and the anti-imperialist Left—such as the U.S. Peace Council, the ANSWER Coalition, some Green Party leaders and even Nobel Peace Prize winner Mairead Maguire—go beyond opposing U.S. intervention and implicitly (and in some cases, explicitly) defend the corrupt and autocratic regime of Bashar al-Assad. They minimize or deny its responsibility for war crimes, attempt to discredit the reputable human rights organizations that document these crimes, treat virtually the entire Syrian opposition as its most extreme and violent components and attack fellow Leftists who disagree with them.

Many of the arguments used to defend the Syrian regime’s devastating attacks on rebel-held cities are eerily similar to those used by U.S. politicians, in their public statements and in a series of bipartisan Congressional resolutions, to defend Israel's massive assaults on the Hamas-controlled Gaza Strip. By combining segments of these statements and resolutions supporting Israel’s “right to self-defense” with certain anti-imperialists’ writings on Syria, I was able to put together the ultimate guide to defending war crimes.

The bombing of Aleppo/Gaza is a legitimate act of self-defense by the government of Syria/Israel against foreign-backed Islamist terrorists. Reports by groups like Amnesty International and Human Rights Watch (HRW) that accuse Syria/Israel of violating international humanitarian law are based on hearsay by terrorist supporters and are not to be taken seriously. Indeed, both Amnesty and HRW have repeatedly shown themselves to be anti-Syrian/anti-Israel, part of their overall pro-/anti-Western bias. Médecins San Frontierés and Physicians for Human Rights have also shown their anti-Syrian/anti-Israel bias in their reports of alleged “war crimes,” ignoring how the schools and hospitals bombed by Syrian /Israeli forces have been used by the terrorists for launching rockets into government-held areas/Israel and are therefore legitimate targets.

And a lot of the supposed “atrocities” blamed on the Syrian Arab Army/Israel Defense Forces are actually staged or committed by the terrorists. The loss of civilian life is tragic, of course, but the responsibility rests solely with the rebels/Hamas. Assad/Netanyahu wants peace, but he has a responsibility to defend his people from terrorism.

Similarly, as demonstrated by their report blaming Syria/Israel for the vast majority of civilian deaths, the U.N. Human Rights Council has shown itself to be irredeemably biased, effectively denying Syria’s/Israel’s right to self-defense. Indeed, the United Nations has a history of unfairly singling out the secular government/Jewish state, therefore requiring Russia/the United States to exercise its veto power to block international efforts to delegitimize the Syrian government/Israel.

Meanwhile, the news media—including shows like Democracy Now! and networks like Al-Jazeera—have simply repeated anti-Syria/anti-Israel propaganda through their one-sided reporting on the conflict, though at least there are networks like RT/Fox News to set the record straight.

Those who demonize Syria/Israel for defending itself against Islamic terrorist groups like Al-Nusra/Hamas don’t really care about human rights or international law. Indeed, those who complain about alleged “war crimes” by Syria/Israel completely ignore the very real war crimes by Israel/Syria. Such supposed “human rights” activists are backing the agenda of the United States and Israel/Iran and Syria and are motivated by imperialism/anti-Semitism.

The Syrian rebels/Hamas would not even exist were it not for support by the U.S. and Israel/Iran and Syria, who use them to carry out their agenda to destroy Syria/Israel. This is why Russia/the United States must continue to defend the people of Syria/Israel, reject calls for suspending military assistance and work with their ally to defeat the threat from terrorism.

Stephen Zunes is a professor of Politics and International Studies at the University of San Francisco. Read more of his work at stephenzunes.org.