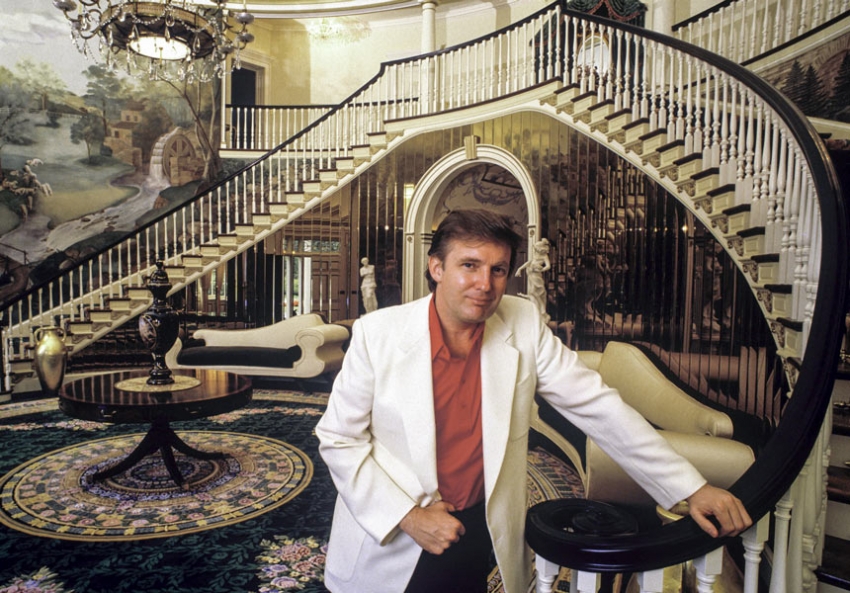 Donald Trump, real estate mogul, entrepreneur and billionaire, poses in the foyer of his home in August 1987. (Joe McNally/Getty Images)

To Form a More Corporate Union

The Land of Enterprise: A Business History of the United States shows that Trump’s greed is no aberration.

Corporate capitalism of Trump-era America looks not all that different from the robber-baron capitalism of the late 19th century.

The present crisis of the American republic stems, at least in part, from a willful misunderstanding of our civic life. Viewed from the soaring liberal presupposition that our nation is, and has always been, a paragon of Enlightenment virtues, Donald Trump seems like a grotesque aberration—a derogation of all that is good and great about America, from equality under the law to reverence for a free press.

Viewed from the actual makeup of the U.S. political economy, however, Trumpism is a foreseeable outgrowth of a centuries-long siege upon democratic institutions. From colonial times onward, a feckless and entitled business class exploited unfree labor and consolidated wealth. With such winds of history blowing so strongly at his back, why shouldn’t Donald Trump—the exemplar of something-for-nothing capitalism—ascend to the Oval Office?

In Waterhouse’s view, for example, the Southern slave economy—generally held to be a feudal atavism outgrown via the Civil War—was a feature, not a bug, in the consolidation of the American capitalist order. “Far from a peripheral part of the story of business and capitalism, slavery was central to the economic development of the United States,” he writes.

In 1860, he notes, enslaved workers represented more than 80 percent of the total output of the U.S. economy—a share that, measured in contemporary dollars, would total more than $13.8 trillion. “Understood in this way,” Waterhouse writes, “enslaved people were capital assets worth more than the country’s entire productive capacity from manufacturing, trade and railroads combined.”

During the first great wave of industrialization in the late 19th century, government operations and business interests converged. The Homestead Act of 1862, for example, was a massive government giveaway to the emerging railroad trusts. In the following decades, federal lawmakers failed to pass antitrust laws with enough teeth to stop steel, oil and finance titans from erecting vertically integrated empires.

Though the intervening years have seen reformers tinker, corporate capitalism of Trump-era America looks not all that different from the robber-baron capitalism of the late 19th century. The postwar years, underwritten by government subventions in the tech, defense and aerospace sectors, were also an orgy of financialized mergers, spurred on by Wall Street’s allegiance to dodgy accounting. When the postwar boom succumbed to 1970s-era stagflation, Wall Street’s paper economy moved into the vanguard, with Presidents Carter and Reagan both overseeing a steady deregulation of economic activity on all fronts, from the airline and trucking industries to the disastrous deregulation (and subsequent multibillion-dollar bailout) of the S&L industry in the 1980s. By the time the 2008 meltdown arrives, Waterhouse’s readers are primed for his verdict: “The Financial Crisis of 2008 marked the culmination of decades of increased financialization, abetted by a deregulatory political attitude that overtook not only American business but global capitalism as well.”

Waterhouse’s survey should not be as eye-opening as it is—but a key collateral casualty of the capture of professional economics by business interests has been the atrophy of the discipline of political economy. Most political histories of recent America touch on economic developments either tangentially or with the reverent attitude of lowly generalists venturing into a hallowed field of sacrosanct expertise.

Such intellectual reflexes do more damage than one might think. The failure to see American political economy in its true proportions is how many latter-day victims of government-business collusion have come to place their faith in the grotesquely miscast figure of Donald Trump. Just ask any of the voters who enthusiastically cast their 2016 ballots for Trump because he was the sort of can-do business genius who would, at long last, shake things up in Washington once and for all.