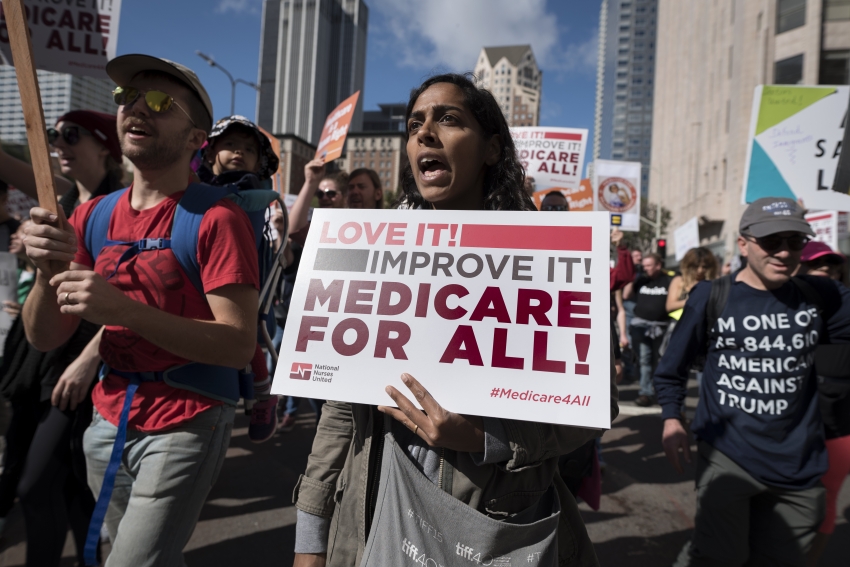 A single-payer plan would mean the United States would finally join the rest of the developed world in guaranteeing healthcare to all citizens. (Photo by Ronen Tivony/NurPhoto via Getty Images)

The Push for Single-Payer Healthcare Is On. Democrats Should Get on Board or Get Out of the Way.

Following the stunning collapse of Trumpcare, Bernie Sanders is leading the fight by progressives to win single-payer.

Making single-payer a demand can provide a clear message of where politicians stand—and call out the hypocrisy of Trump, who as a candidate promised “insurance for everybody.”

Update: On Monday, July 17, the Republican healthcare plan in the Senate was effectively killed when enough GOP senators announced their opposition to the bill to ensure it would not pass, causing Majority Leader Mitch McConnell to pull the bill from consideration.

The failure of Trumpcare to pass the House on Friday was a devastating defeat for both the nascent administration and the GOP. For seven years, Republicans railed against Obamacare, promising to “repeal and replace” the law as soon as they could. Trump himself pledged to do so repeatedly on the campaign trail and from the Oval Office.

Yet despite controlling both houses of Congress and the presidency, Republicans could not get a bill through their own caucus in the House. Speaker Paul Ryan, one of the bill’s architects, admitted, “This was a disappointing day for us.”

Democrats understandably responded with glee. However, besides Bernie Sanders, their side of the aisle offered little in the way of a counter proposal for how to address the very real problems with Obamacare.

Trump and Ryan correctly predict that the issues with the current healthcare system—from rising premiums to insurers pulling out of exchanges—are only going to get worse over the coming months and years.

Part of the reason is that Republicans will do everything in their power to make sure these problems intensify. Health Secretary Tom Price, a longtime opponent of Obamacare, has considerable leverage to disrupt the already fragile system set up by the Affordable Care Act.

But the fundamental failures of Obamacare stem from the law's reliance on the private market. Why are insurance companies such as Humana and Aetna fleeing the exchanges? Why are premiums spiking for many middle-class Americans? Because private companies are responding to the logic of capital: Maximize profits while reducing costs.

When Republican governors reject Medicaid expansion, more sick, low-come people require insurance coverage—the healthcare consumers who are the most expensive to treat. This, in turn, creates a disincentive for insurers to offer affordable plans through the exchanges, and, as a consequence, providers pull out of markets and costs rise for everyone.

This trend is sure to continue if nothing is done to fix the system, and the only fix that will work is to expand the risk pool and include everyone. With such a system of universal coverage, costs would be spread out evenly and illness would no longer be seen as a liability in determining the costs and benefits of care.

Any real long-term solution must take this question of the market head on by moving to eliminate the private healthcare insurance industry.

So how can Democrats respond to the problems with Obamacare and the coming sabotage? The answer is simple, and incredibly popular: Push for a single-payer, Medicare-for-all system.

Bernie Sanders, the most popular politician in America and open democratic socialist, plans to introduce legislation creating a Medicare-for-all system in the Senate in the coming weeks. Democratic National Committee Deputy Chair Keith Ellison, a co-sponsor of a Medicare-for-all bill in the House, has reiterated his support for the measure. And as Dave Weigel reports at the Washington Post, more Democrats are coming around to the idea. Even Nancy Pelosi, who recently said of Democrats, “We're capitalists, and that's just the way it is,” is voicing support for single-payer.

A single-payer plan would mean the United States would finally join the rest of the developed world in guaranteeing healthcare to all citizens regardless of their income. And it would greatly reduce costs.

Plus, as Medicare for All organizer and longtime prisoner justice advocate Mariame Kaba recently explained, it directly speaks to the needs of working people by building off of an already incredibly popular program:

What you need in an organizing sense is you need an issue to be able to appeal to people. Medicare is what we have that is the most close to a kind of socialist policy in place around healthcare. It’s the one that people understand, that they already have…You organize around the things that have material, direct, and urgent impact on people’s lives, and then you push those people through that fight into fighting for other things together.

The barriers to passing single-payer in the current political terrain are significant. Republicans want to move in precisely the opposite direction, separating government from healthcare. And moderate and conservative Democrats have historically been resistant to such a plan.

But following the spectacular failure of the Republican bill, momentum is on the side of the opposition. This creates an opportunity that progressive groups are hoping to seize.

Organizations such as National Nurses United, the Working Families Party, the Democratic Socialists of America and the Progressive Campaign Change Committee all hope to organize the grassroots in order to take advantage of this newfound push for single-payer.

From demand to reality

Much reporting on the GOP failure to pass Trumpcare has focused on Republican infighting, but the massive outpouring of resistance from the public played a critical role. Phone calls from constituents went 50-1 against the bill, and recent congressional town halls have been mirror images of those crashed by Tea Party protesters during the fight over Obamacare.

A continuation of this citizen engagement will be needed to move the country closer to a single-payer system. In states such as Rhode Island and California, local activists are pushing proposals for single-payer. And while the bills supported by Sanders and Ellison are unlikely to pass now, they provide Democrats with a rallying point to demand a truly universal healthcare system—a proposition supported by 58 percent of Americans.

This would also open the door to proposals that lay the foundation for single-payer, whether it’s allowing the import of cheap pharmaceuticals from Canada and other countries, introducing a public option on the exchanges or lowering the Medicare age to 55—a popular idea that nearly became law with the passage of Obamacare before it was torpedoed by then-Sen. Joe Lieberman. Lowering the Medicare age would clear the path for eventually taking it all the way to zero.

The crashing and burning of Trumpcare will benefit millions of Americans. Yet millions continue to live without affordable healthcare. Making single-payer a demand provides a clear message to politicians: Where do you stand? It also provides an opportunity to call out the hypocrisy of Trump, who as a candidate promised “insurance for everybody.”

Single-payer would do that, and it would cost considerably less than the current system. That is a clear and simple message, and it's a winning one for 2018 and beyond.