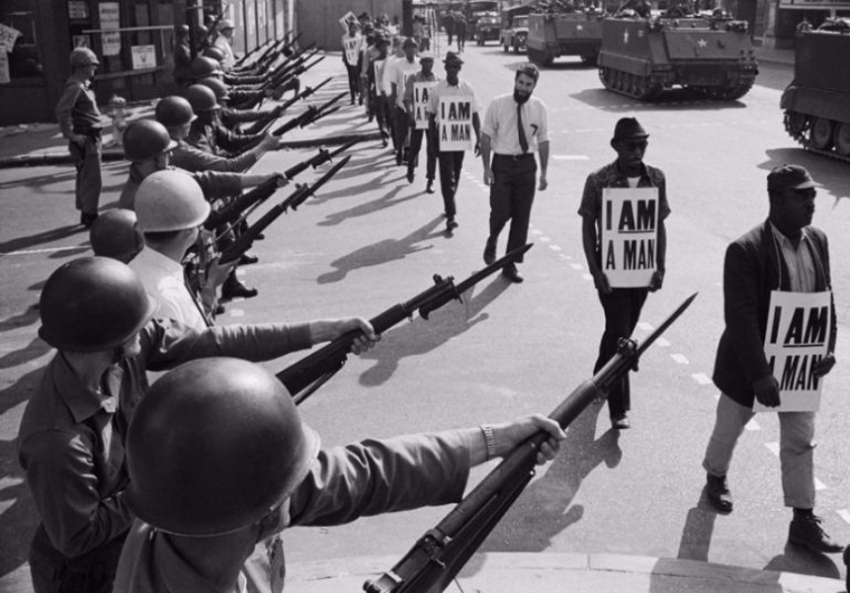 Striking sanitation workers in Memphis carried signs reading, “I Am a Man.” This was the Black Lives Matter declaration of 1968.

MLK Called for a “Radical Revolution of Values.” The Movement for Black Lives Delivers One.

50 years ago today, King blasted militarism, racism and poverty in his “Beyond Vietnam” speech. The new Beyond the Moment campaign carries forward his radical vision.

Emboldened to resist what he termed the triple evils of militarism, racism and poverty, King in his “Beyond Vietnam” speech offers a lesson for our own time.

April 4 marks the 50th anniversary of Martin Luther King Jr.’s historic 1967 “Beyond Vietnam” speech. At a gathering in New York’s Riverside Church convened by the antiwar group Clergy and Laity Concerned About Vietnam, he condemned war, U.S. imperialism, materialism, racism and the excesses of capitalism. Exactly one year later, King was assassinated on a balcony of the Lorraine Motel in Memphis, Tennessee.

During the final year of his life, King was at his most radical in his politics and the most sweeping in his analysis. Emboldened to resist what he termed the triple evils of militarism, racism and poverty, King in his “Beyond Vietnam” speech offers a lesson for our own time. It is rich with provocative and relevant messages for the racial justice and economic justice movements, and the international solidarity work they require. Take, for example, his insistence that we wage a war on poverty rather than invest more human and financial resources in military aggression abroad. What demand could be more timely, give the promise by the 45th president to siphon an additional $54 billion dollars from public funds to further engorge the Pentagon budget?

In the speech, King underscored the “fierce urgency of now,” and the need for this country to embrace a “radical revolution of values.” That revolution, of course, has yet to come, and its urgency has only increased. But King’s vision is resurgent in the coalition of Black-led organizations known as the Movement for Black Lives (MBL). Fittingly, on April 4, MBL, and dozens of allied organizations, is launching the Beyond the Moment campaign, which takes its name from King’s speech. It will kick off with massive political education events and a call for May Day demonstrations alongside labor, immigration and climate activists.

The MBL “Vision for Black Lives” platform issued in August 2016 spells out what King’s “radical revolution of values” might look like. The platform echoes King’s vision—in its demands for healthcare, housing and jobs and its critique of a system that “place(s) profit over people.” Two pivotal struggles were at the heart of King’s work during his final year: the Poor People’s Campaign and the Memphis sanitation workers’ strike.

Influenced by a network of advisors and loving critics, by 1968 King had come see the importance of foregrounding economic justice as a critical part of the fight for racial justice. Until his assassination on April 4, 1968, King and his allies worked to craft the historic Poor People’s Campaign. Following King’s death, the campaign culminated in a caravan of impoverished Americans marching to a symbolic encampment on the National Mall in Washington, D.C., called Resurrection City, which lasted from May 12 to June 24, 1968 and drew thousands of people. Unlike Occupy Wall Street which focused on the obscene concentration of wealth in the hands of the top 1%, the Poor People’s Campaign focused on the bottom 1%: the poor, the unemployed, the hungry and the homeless.

Theirs was the suffering that had to occupy our political consciousness. And it was the Memphis Sanitation Workers Strike, which began on Feb. l2, 1968, that helped bring it to the forefront.

The names of Echol Cole and Robert Walker are not well-known today. They were two black sanitation workers, ages 30 and 36, in Memphis, Tenn., who were crushed on February 1, in the back of a raggedy garbage truck. Their gruesome deaths were reminders of the devaluation of black life at the time and triggered a citywide strike that brought King and other supporters to Memphis that spring. That strike became pivotal struggle that bridged the labor and the Civil Rights movements.

Garbage workers were disproportionately Black and so poorly paid that many had to rely on welfare and food stamps to make ends meet. Workers were treated abysmally and labored under unsafe and inhumane conditions. Their labor mattered but their lives did not. Cole’s and Walker’s death’s were the last straw. Even though Henry Loeb, the city’s racist mayor, had refused to recognize the sanitation workers’ right to organize, 12 days later the workers went on strike. Strikers carried signs reading, “I Am a Man.” This was the Black Lives Matter declaration of 1968. Cole and Walker were fathers, workers, neighbors, sons and brothers. They were men, not garbage.

Black workers of Memphis took to the streets. They were joined by civil rights activists, white supporters, and high school and college students, who walked out of classes to join the protests. The marches were loud and angry; in some cases, windows were broken and stores were looted. The violation of property was met with violence by the local cops. In the course of the uprising, a 16-year-old black youth, Larry Payne, was shot and killed by a Memphis police officer. Dr. King called the boy’s mother, Lizzie Payne, to express his condolences for her son’s murder at the hands of the state.

King’s voice and activity in that final year of his life threatened the status quo like never before. He lost many mainstream supporters who sharply criticized him for overstepping his role as a “negro leader.” Today, in King’s footsteps are those who are deliberately overstepping a narrow definition of Black politics to forge a new and vibrant united movement that builds upon and transcends the foundation laid by King, Ella Baker, Fannie Lou Hamer and others.

The Movement for Black Lives centers on those at the bottom of the social and economic hierarchy and rejects the politics of black respectability—a politics that historically has focused on the so-called “best and brightest.” In speeches, campaigns and the major policy documents issued by MBL, and constituent organizations like Black Lives Matter Global Network and BYP100 (Black Youth Project 100), the emphasis is on low-wage workers, those incarcerated or formerly incarcerated, and LGBTQIA survivors of state and vigilante violence. Both BYP100 and more recently, MBL have teamed up with the Fight for 15 to further the struggle to raise the minimum wage. As Fight for 15 points out, more than 50 percent of Black workers earn less than $15 an hour. The nexus between race and class is clearer than ever. Money spent on bloated police budgets effectively shortchanges public services and public education.

Today’s Black freedom fighters echo King’s work, but take the politics of inclusion and a radical ethos of justice further. MBL organizers stress the Black feminist principle of intersectionality and they extend it to issues of gender and sexuality, something King gave scant attention to. They have publicized and rallied against anti-trans violence and insisted on the leadership of women and queer folk in movement spaces.

Dr. King concluded his speech by insisting that in moments of historic juncture, we have to make a choice, a difficult choice: Do we resist or do we acquiesce? That choice is before us again today. “Let us begin,” he urged, “let us rededicate ourselves to the long and bitter, but beautiful, struggle for a new world.”

For events and discussions commemorating Dr. King’s speech, see National Council of Elders. To find out more about the Movement for Black Lives’ Beyond the Moment campaign, go to beyondthemoment.org.