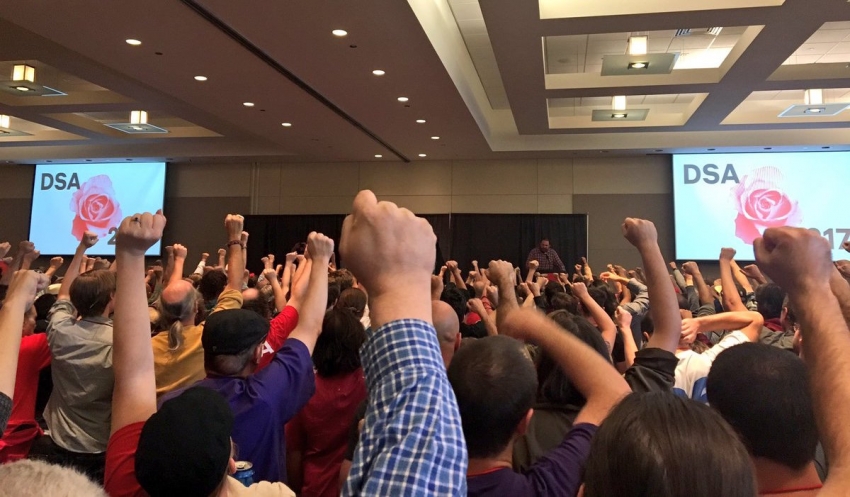 At the largest gathering of U.S. socialists since World War II, fists were raised high. (Photo by Micah Uetricht)

“Are y’all ready to crush the private health insurance industry? Are you ready to make healthcare a human right in America?”

These questions from Ari Marcantonio, a single-payer organizer for the East Bay chapter of the Democratic Socialists of America (DSA), were met with raucous cheers at the organization’s national convention in Chicago this weekend.

DSA members affirmed their commitment to making single-payer organizing a national priority with a majority vote by the convention’s more than 700 delegates. Billed as the largest gathering of U.S. socialists since World War II, the convention took place on the heels of DSA reaching more than 25,000 dues-paying members—an all-time high (this author is a member of the group).

The organization’s growth has been dramatic: In May 2016, DSA had just 6,500 members, meaning the group has nearly quadrupled in size in just over a year.

Delegates to the convention also voted for resolutions backing the ‘Fight for $15,’ supporting the boycott, divestment and sanctions campaign against Israel and endorsing Black Youth Project 100’s Agenda to Build Black Futures, among many others.

Where recent years’ DSA conventions have been much smaller affairs, at times attended by fewer than 200 members, this year saw more than 1,000 democratic socialists assemble, practicing the sometimes messy process of self-governance—and grabbing national media attention along the way. Many of the attendees were young and new to the organization, inspired in large part by Bernie Sanders’ 2016 run for president as an open democratic socialist.

Sanders made the demand for a universal, single-payer healthcare system a centerpiece of his campaign, and has continued to rally support for such a program throughout the recent healthcare debate in Congress over the GOP’s efforts to repeal and replace Obamacare.

Polls show that more and more Americans are turning on to the idea of single payer, with 53 percent now in support of getting health insurance from a single government plan. Prominent Democrats are beginning to speak out in favor of such a program, and John Conyers’ (D-Mich.) single-payer bill in the House, which he’s introduced every year since 2003, now has record support.

This newfound appeal of single payer has created an opportunity that DSA members hope to seize. Throughout the convention, the energy around organizing for Medicare for All was palpable.

Jen James, a member of the socialist-feminist working group in the New York City chapter, told attendees that “Medicare for All can be a truly transformational reform and give power back to the working class.”

James explained how fighting for universal healthcare benefits the most vulnerable members of society while bridging key issues—from opposing the prison industrial complex to challenging wealth and income inequality. “Studies show that wealth is the greatest predictor of good healthcare outcomes,” said James. By fighting for universal healthcare, we can “focus our efforts on those who have the most to gain: single mothers, women of color and the working poor.”

In New York, where James organizes, members are advocating for the New York Health Act, a bill that would provide a universal, publicly-financed healthcare system. And in the East Bay chapter, Marcantonio and hundreds of other volunteers are knocking on doors to build support for the Healthy California Act, which would also institute single payer statewide.

These efforts on the state level show how organizing around single payer offers key opportunities for political mobilization.

“I think single payer will be an issue that people across the entire organization take up, but it may look different in different states,” says Joseph Schwartz, newly re-elected member of DSA’s national political committee. “In places like Minnesota, New York and California, it is a real question of whether it can be passed and implemented. But I do think in red states there will have to be a focus on defending against cuts to Medicaid.”

That doesn’t mean organizing for universal healthcare is being confined to states with Democratic majorities, however. Amy Zachmeyer is a DSA member and single-payer organizer in Texas, one of the reddest states in the nation and home to the country’s highest uninsured rate. She says her experience has shown that people are open to considering radical ideas when they are presented as a genuine break with the political establishment.

“Fox News has inoculated their viewers against the Democrats,” Zachmeyer says, so openly identifying as a socialist and inviting people to join the fight for Medicare for All “is not an alienating ask.”

To build national support for the demand, Philadelphia DSA member Dustin Guastella advocates organizing for a federal Medicare for All system that would cover every American regardless of what state they live in.

“The federalized nature of the U.S. healthcare system creates barriers for state-wide wins,” Guastella told convention attendees. “We need to raise the profile of this demand and force politicians to listen to a durable political coalition built at the national level.”

“We should be the organizational home for the millions of people who believe in single payer: health advocates, workers, Sandersistas and socialists,” says Guastella.

DSA national director Maria Svart tells In These Times, “Single payer is obviously an issue that resonates and has real traction right now. It’s both good in and of itself and it’s a good organizing issue.”

Coming out of the convention, DSA leaders and membership will now turn to the task of how best to advance their priorities, including single payer—and how to build socialist politics in the process.

One immediate area where the group can show their influence is the upcoming 2018 elections, where healthcare is sure to come up as a prominent issue. By demanding that candidates support taking insurance out of the private market and making it universal, DSA members can have a direct impact on this debate, shifting its terms toward a truly radical reform: the decommodification of healthcare in the United States.

If this year’s convention is any guide, the excitement behind single payer has the potential to lead to a new wave of organizing behind a goal that just a few short years ago seemed a near impossibility.

After the Medicare for All resolution passed, the chair announced that “the DSA supports socialized medicine in America.” And another round of cheers erupted through the convention hall.