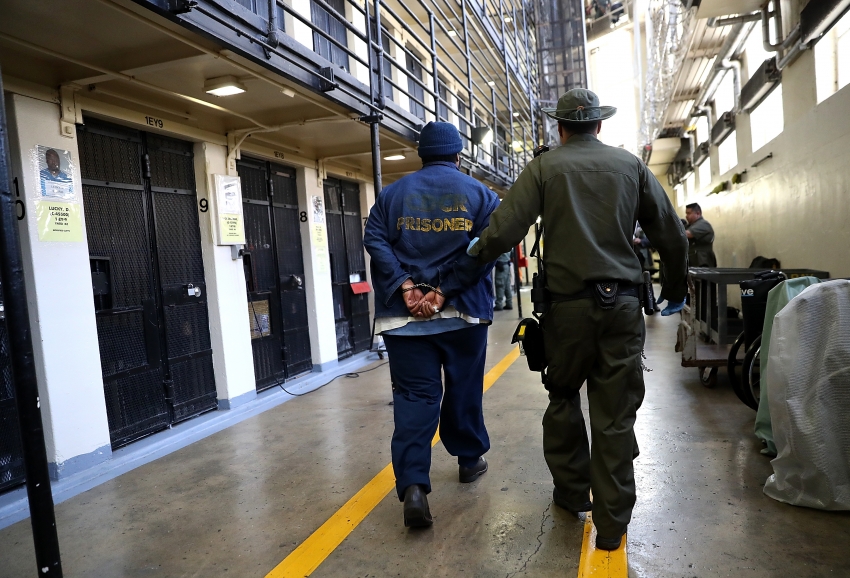 To End Mass Incarceration, We Must Rethink How We Respond to Violence

Using restorative justice techniques as an alternative to prison has a surprising group of supporters: victims of violence

As a society, we fail to humanize perpetrators of violent crime. We fail to separate the person from the act.

Donald Trump wants you to believe that the country is consumed by violent crime. He claimed earlier this year, “The murder rate in our country is the highest it's been in 47 years, right?” This summer, Attorney General Jeff Sessions echoed the claim that the United States is in the middle of a crime wave, in order to justify harsh policing and incarceration practices.

Both claims are deeply misleading: The violent crime rate peaked in 1991. Despite a few small blips year to year, its overall trajectory has been unmistakably downward ever since.

However, violent crime remains a major driver of the U.S. mass incarceration crisis. The United States incarcerates a total of 2.3 million people, with more than 4.5 million more on probation or parole. At the state level—which hosts more than half of the national prison population—most are serving time for violent offenses.

Violent crime is defined as offenses that involve force or threat of force. The definitions differ state by state, and the term itself has a lot of complexities, but at a federal level this category is generally composed of four kinds of charges: murder and non-negligent manslaughter, forcible rape, robbery and aggravated assault.

Our incarceration rate per capita is far higher than any other country in the world, and it's not doing much to curb violent crime charges. More than 70 percent of incarcerated adults held on violent convictions are later arrested again.

However, it’s going to take more than calling out the administration on its misguided rhetoric to fix our broken carceral system. It’s going to take radically shifting the way we think about violence and public safety.

As a society, we fail to humanize perpetrators of violent crime. We fail to separate the person from the act. We fail to look at acts of violence as products of other structural and generational violence—like racism, poverty, mental illness and addiction.

For instance, black people make up 13 percent of the total U.S. population but 40 percent of the prison population, and people sentenced to prison have pre-incarceration incomes 41 percent lower than their peers on the outside. At least half of state prisoners with a past or current violent conviction have a mental illness, and nearly two thirds of people incarcerated in prisons and jails suffer substance abuse issues.

Yet sentencing guidelines often emphasize taking revenge on the already marginalized, instead of giving them a chance to take accountability for their actions—so they never get a true chance at rehabilitation.

As a result, we continue to reinforce disparities in incarceration and cycles of violence. But we also perpetuate harm for survivors. After Janet Connors’ 19-year-old son Joel was murdered during a brutal home invasion in Boston, she explained in the Julie Mallozi documentary Circle Up, she found that the conventional penal system was only furthering her trauma.

So instead, Connors asked two of the men convicted of her son’s murder to participate in a restorative justice process with her.

Restorative justice is a community-based justice process that engages those involved in an incident—including survivors and perpetrators—in collaborative decision making in order to restore the harm committed. In her talks with the two men, Connors was given the space to express the impact her son’s murder had had on her. The two men were able to appreciate the extent of the harm they’d caused, understand what events in their own lives had led up to the incident, and slowly earn Connors’ forgiveness.

Now Connors works to bring restorative justice to schools as an alternative to suspension and reaches out to other survivors through the Homicide Support Services Program.

“I believe there are a couple of layers to forgiveness,” Connors told the Humankind radio show. “There’s one with no strings attached. That’s more about spiritual freeing of self. One that makes sure that vengeance doesn’t eat you up, or turn your heart to stone.”

Then, she added, there’s “a more practical layer.” To offenders, she says: “You’re coming back out into our community. If you keep doing dirt, then you’re hurting our community again. And for me, you might as well kill my son all over again.… [G]iving you forgiveness … has some accountability, and that I expect you to lead a good life.”

Connors has found healing and freedom through accountability and forgiveness. Both of her son’s murderers have had a successful re-entry into society and have not re-offended.

I recently heard Danielle Sered speak about this revolutionary approach to violence. Sered is a survivor of violent crime and the founder and director of Common Justice, a groundbreaking project through the Vera Institute of Justice, a national research and policy organization that works to improve our country’s justice system.

Sered’s organization receives referrals from the Brooklyn District Attorney’s office and diverts adults convicted of violent felonies away from the prison system using restorative justice practices. But the program isn't only appealing to people facing time behind bars: Sered has found that when she contacts survivors of violent crime and offers them an alternative to incarceration, the vast majority opt for the restorative justice approach.

Sered finds this surprising result entirely logical. To her, the belief that the criminal justice system is built on—that victims want to see their offenders incarcerated—is baseless.

“People know that the best result that that system can deliver if they engage in it is the incarceration of the person who hurt them,” she says. “They don’t believe that that will deliver them the safety and justice they deserve.”

In fact, she observes, “the vast majority of people who survive violence … prefer nothing to everything we have on offer.” That's because many crime victims live in places where they can see the failing system firsthand. “There is no one who it is harder to persuade that incarceration produces safety than those who live in neighborhoods where incarceration is prevalent,” Sered explains.

Restorative justice, on the other hand, boasts high rates of survivor satisfaction and has been found to reduce recidivism, ultimately increasing public safety.

A restorative justice approach insists that we can't truly provide for public safety without rehumanizing the people who commit violent acts. It maintains that we must believe in their ability to be more than the worst act they’ve ever committed. It asserts that we have to believe in their ability to truly face the harm they’ve caused, while recognizing that most are victims of violence themselves.

Yet a restorative approach such as Sered’s prioritizes survivors' needs as well, and works towards truly reducing violence.

If we're serious about ending violence—and mass incarceration—we need to expand our ideas about who's deserving of empathy, and radically rethink our approach to violent crime. Brave survivors like Connors and Sered make a forceful case that we can do that by betting on people’s humanity, not more jail cells.

Sophie Bandarkar is a Next Leader on the Criminalization of Race and Poverty Project at the Institute for Policy Studies.

They Are Burying Us Alive in Prison