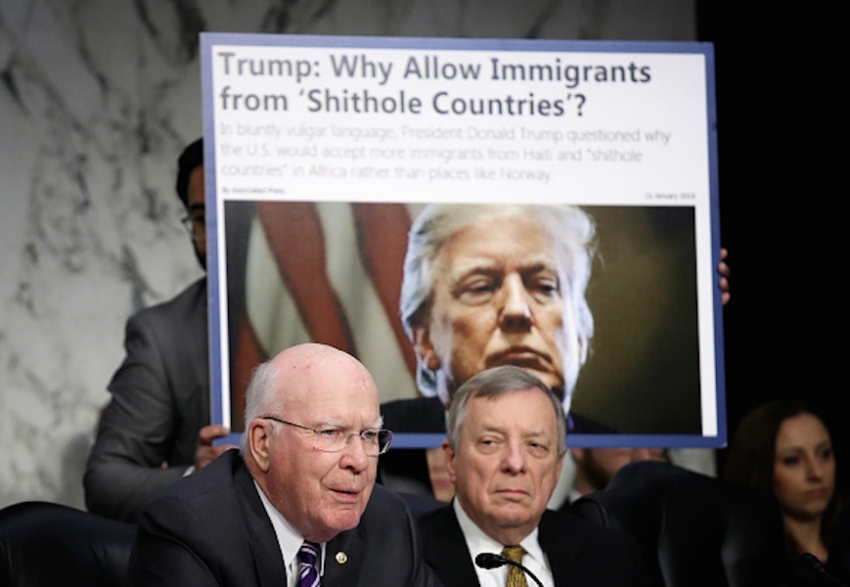 The loud denunciations of Trump serve to hide liberal racism.

Rather than decrying Trump’s use of the word “shithole,” I wanted to see liberals held accountable for the policies they’ve enacted that treat Black and Brown communities like shitholes—both across the globe and in the U.S.

During a bipartisan meeting this week, President Trump allegedly referred to immigrants from Haiti, El Salvador, and the African continent as coming from “shithole countries.” Why, he asked, were so many of their people being let into the U.S.?

The denunciations came rapidly and from every corner of the Democratic Party. Hillary Clinton called the comments “ignorant” and “racist.” Her husband tweeted that the countries Trump described “do not exist” in his experience, praising Haitians as “creative, hard working, brave, and persistent.” Chicago Mayor Rahm Emanuel took advantage of the moment to celebrate Jean Baptiste Point Du Sable, the Haitian man known as the city’s founder.

I wished that, instead of belaboring semantics and extolling exceptional immigrants, the liberal establishment had acknowledged its role in creating a global refugee crisis:

Black and Brown people from across the planet frequently relocate to the U.S. because centuries of U.S. military intervention (like Obama’s “precision” drone strikes that killed hundreds of civilians in Afghanistan, Yemen, and Somalia), U.S.-funded coups and civil wars (as in the Carter administration’s sponsorship of El Salvador’s murderous right-wing regime in the 1980s), and the extraction of resources by U.S. corporations (recall President Clinton’s subsidizing of U.S. rice in Haiti, upending the local economy) have rendered their homelands unlivable, forcing them to seek refuge within the very empire responsible for the conditions they are fleeing.

Rather than decrying Trump’s use of the word “shithole,” I wanted to see liberals held accountable for the policies they’ve enacted that treat Black and Brown communities like shitholes—both across the globe and in the U.S.

This week on CNN, conservative pundit Stephanie Hamill rebuffed attacks on the president, attempting to demonstrate the ways the Clinton Foundation has long exploited the Haitian people. Though many conspiracy theories about the foundation have been debunked, it is indeed responsible for displacing farmers to build foreign-based textile factories—doing far more to take advantage of cheap labor in the wake of the 2010 earthquake than to build economic self-determination for Haitians.

Liberals across the media scoff at such conservative arguments, calling them deflections. But liberal attacks on Trump’s language serve a similar purpose—to portray themselves as moral by contrast, while papering over the equally racist impacts of their own practices.

While a quick survey of foreign policy unearths a long history of liberal violence against Black and Brown people, one need hardly look to the past—nor outside of the U.S.—to locate glaring examples of liberal racism.

In Chicago, Democratic Party strategist-turned-mayor Rahm Emanuel is closing all four remaining public high schools in Englewood—one of the poorest, Blackest neighborhoods in the city—even as his administration gears up to build a $95 million police training facility in the equally Black and impoverished neighborhood of Garfield Park. In Baltimore, Democratic city officials forced Black kids to go to class last week in buildings at freezing temperatures, after recently opening their own new juvenile detention facility.

In other words, Democratic and liberal leadership routinely treat Black and Brown communities as worthless and disposable, suitable for punishment rather than investment. No one has reported Emanuel or any member of Baltimore’s city government using vulgarities in reference to the communities their actions target. But do we need them to, in order to intuit the deep disdain for people of color at work?

The inability of liberals to hold themselves and their elected officials accountable for racist practices, while they explode with outrage every time someone from the Trump camp makes a sensationally bigoted comment, reveals the role Trump plays for liberals: He is a convenient cover for their own racism, and for the ways liberal and conservative policies alike are destabilizing Black and Brown communities worldwide.

I first understood how Trump’s values mirrored those of liberals during his response to the violence in Charlottesville. After he declined at a Trump Tower press conference to renounce Nazis, claiming there were “fine people on both sides,” he commented about the removal of Confederate statues:

Here, Trump grappled with a realization white people across the political spectrum avoid: Once we commit ourselves to razing one form of injustice, all others connected to it must begin to collapse. If we as a society are to fully denounce slavery, we must, in fact, denounce this nation’s founders. Equity cannot exist up to a point, but demands the total transformation of our society, requiring the undoing of systems—from corporate domination of the public sector to the prison and military industrial complexes—in which liberals and conservatives are equally invested.

Trump is a useful target for liberal spite because he presents himself in exactly the way liberals would have us believe a real racist does: He is ignorant and uninformed; he spouts epithets and bombastic vulgarities; he seeks to incite violence; he wears his bigotry as a badge of honor. When the Trump administration is portrayed as the face of racism, slier racists are shielded from scrutiny, and we reserve our rage merely for those who use vulgar language, rather than those who commit vulgar acts.

When Jeff Sessions threatened in 2017 to cut federal funding from sanctuary cities, Mayor Emanuel promised to stand up to the bullies, defiantly maintaining Chicago’s sanctuary status. Liberals celebrated his speech, ignoring that the city has never been a real haven for its undocumented residents, nor for Black and Brown communities at large. It was immigrant organizers, not liberals, who in the wake of Emanuels announcement demanded that, in order to make Chicago a true sanctuary, the Chicago Police Department’s gang database—which allows suspected gang members to be deported without being convicted of any crime—be dismantled. It was immigrant communities who insisted that only when Black people—immigrant and non-immigrant alike—do not fear being killed by police with impunity, and can count on access to high-quality public education and affordable housing, can Chicago call itself a sanctuary. It was immigrants, not liberals, who stood up to the bullies in their midst.

Trump commits the faux pas of expressing his bigotry outwardly, busting through the decorum of polite racism that guides so much liberal policy. It is easy to vilify Trump. It is much harder, having established his beliefs as abhorrent, to oppose them wherever they manifest, including within supposedly left-leaning communities and political parties.

So long as our actions are rooted in a convenient hatred of Trump, rather than a commitment to dismantling the larger structures that enact racial violence, the result will continue to be exploitation and harm for the communities that liberals and conservatives alike treat as shitholes.