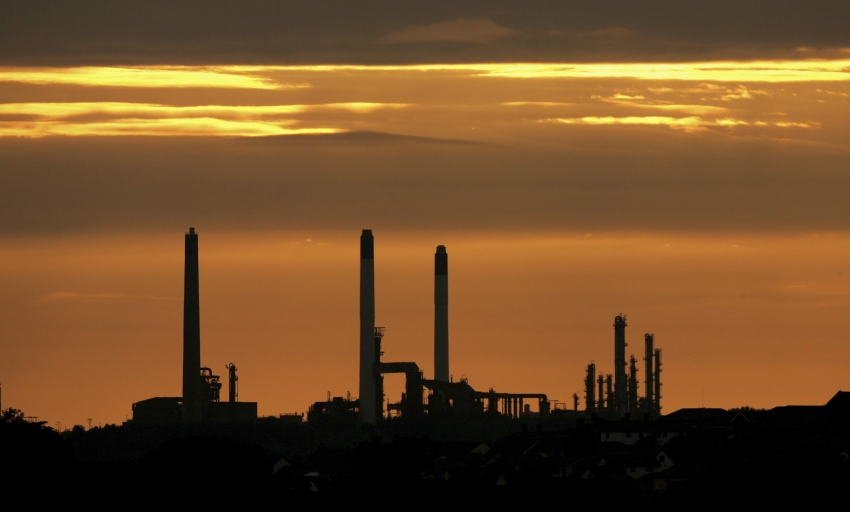 An oil refinery is silhouetted by the setting sun on August 9, 2006 in Milford Haven, Wales. (Photo by Scott Barbour/Getty Images)

The Planet Is Burning and Neoliberalism Is Not the Answer

Unleashing the force of the marketplace will do nothing to lessen the force of the storms now pounding our coastlines, nor will it extinguish the wildfires destroying large swaths of California.

With the Republican Party in full control of the federal government, much of the energy of the anti-Trump resistance has shifted to the state level, especially in places where Democrats hold considerable power. But when it comes to climate and energy policies, we must resist the temptation to embrace half-measures and failed market schemes. Unfortunately, these false climate solutions are being promoted from liberal strongholds from Oregon to Washington to Virginia to New Jersey, where new Democratic governors are being pushed to sign on to cap-and-trade climate incrementalism.

This misguided approach stems from a longstanding political ideology. Neoliberalism is the destructive dogma embraced by both political parties for about 40 years that privatization, deregulation and competition can fix the world’s many problems. The policies that emerged from this creed have inflicted a heavy toll on society, from the 2007 mortgage meltdown and recession to growing income inequality and—according to some—the election of Trump. So, it is troubling to find, in the aftermath of storms Henry, Irma, Jose and Maria, that climate “progressives” are adhering to the neoliberal agenda by proposing varying forms of market-based pricing schemes, like carbon cap-and-trade and taxes, as the way to address the biggest threat to life on earth.

Neoliberalism places the burden of remedying our troubles squarely on consumers, premised on the principle that market competition will create shifts in demand and—consequently—production and consumption. In the climate context, pricing proponents believe that we can reduce fossil fuel use with a simple market adjustment: a price on carbon to adequately represent the ecological costs of its use. Such a price, the theory goes, would make using fossil fuels prohibitively expensive, thus allowing renewable energy sources to better compete with oil, gas and coal. Consequently, our planet would be saved through the magic of the marketplace.

These pricing schemes started out as anything but progressive. Cap-and-trade is an anti-regulatory approach to pollution control that was boosted by Boyden Gray, an industry lawyer who served as counsel to George H.W. Bush. Gray worked with the Environmental Defense Fund to amend the Clean Air Act of 1990 to allow for the trading of pollution credits under the Acid Rain program as an alternative to strict emission control limits. Similarly, ExxonMobil was one of the earliest leaders behind carbon taxes back in 2009. Rex Tillerson, then CEO, knew he could easily manipulate these kinds of market schemes to avoid having to cut production. His company would continue to profit richly from the extraction and sale of fossil fuels for decades to come, while consumers were forced to pay increased oil and gas prices.

If industry endorsement isn’t enough of a red flag for climate progressives, then the dismal track record of pricing approaches should be. While market proponents herald the Acid Rain Program as a success, it only achieved roughly half of the reductions of non-market regulatory programs that were in place at the same time in the Europe Union and Japan, according to a comparative study released in 2004. And it’s highly questionable how many of these reductions had anything to do with the cap-and-trade system itself, as noted in an analysis produced by Food and Water Watch—the organization I work for.

Subsequent climate cap-and-trade programs—the European Union and California programs—have been absolute failures fraught with fraud, market manipulation and environmental injustice. A study released in 2016 on the California plan found that many of the covered industry sectors are using the purchase of credits to increase emissions of pollution in frontline communities of color. Yet that systemic racism didn’t stop mainstream environmental groups in California from advocating to renew the program in 2017.

Carbon tax programs have, likewise, failed as a climate strategy. The British Columbia tax plan implemented in 2008, held out by many tax promoters as a model for the United States, actually resulted in increased carbon emissions, while consumers with few energy options had to pay the increased costs to drive their cars to work and heat their homes. Taxing consumers for their forced dependence on fossil fuels is not only ineffective, but highly regressive and inequitable, as struggling families experience disproportionate financial strains to meet increased energy costs. With Trump signing into effect a new federal tax scam designed to shift even more of the financial responsibility off of the rich and onto working- and middle-class Americans, an ineffective but punitive carbon tax becomes even more troubling.

It’s not like we don’t know how to deal with pollution. Back in the 1970s, when faced with other environmental crises, Congress passed a series of laws that placed firm air and water emissions limits on industries for many pollutants, recognizing that economic efficiency shouldn’t take priority over human and environmental health and safety. That swift action resulted in cleaner water and air across the county. Yet now, neoliberalism has taken such an entrenched hold, even “progressives” are clamoring to implement ineffective and harmful pricing approaches that burden consumers instead of simply mandating carbon emissions reductions for all emitters and implementing a just transition to a clean energy economy.

Many progressives rightly celebrated the rejection of the discriminatory and inequitable Trump policies with the 2017 elections, where the Republican agenda was soundly defeated across the country. But just days after a Democratic landslide in Virginia, the state announced its plan to unveil a carbon cap-and-trade program that, like the California system, will allow polluters to simply buy their way out of decreasing emissions. If desperately dusting off right-wing, industry-promoted solutions to pollution control is the best we can do after the kind of progressive political shift we witnessed in Virginia, then this planet is truly doomed to suffer the worst impacts of our climate travesty.

Unleashing the force of the marketplace will do nothing to lessen the force of the storms now pounding our coastlines, nor will it extinguish the wildfires destroying large swaths of California. Pollution pricing isn’t progressive; it’s a regressive, conservative approach that will deliver the same outcomes that other neoliberal approaches have: deeper inequity and sustained corporate control. It is time to stand up and reject these pricing schemes and demand climate change policies that are actually going to promote justice and save the planet, not leave us scrambling to survive the coming decades.

Scott Edwards is an environmental attorney and co-director of the climate and energy program at Food & Water Watch and its legal advocacy arm, Food & Water Justice.