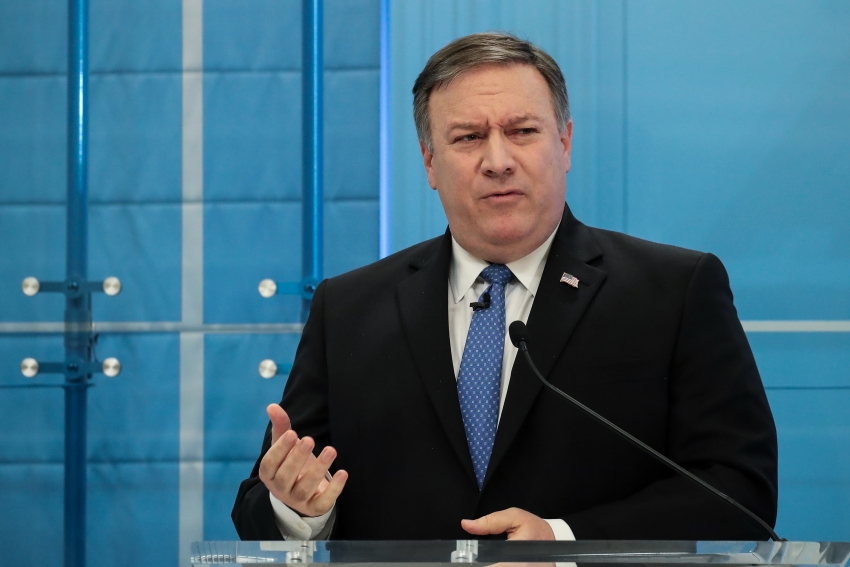 There is little hope that the Senate will block Mike Pompeo’s nomination. (Drew Angerer/Getty Images)

The likely next Secretary of State Mike Pompeo is a Koch-funded, far-right ideologue who supports torture, denies climate change, disparages Muslims and sounds thirsty for war.

Pompeo will only reinforce Trump’s most dangerous, reckless and militaristic instincts.

On Tuesday, President Trump abruptly fired Rex Tillerson and announced CIA Director Mike Pompeo as his choice to become the next Secretary of State. This decision serves as another disturbing development in the increasingly dangerous foreign policy turn taken by the current administration.

No tears should be shed over the departure of Tillerson, who oversaw the decimation of some of the more responsible agencies of the State Department and the downgrading of its capacity and resources. Tillerson cared little for diplomacy and his close relationships with the leaders of Russia, Saudi Arabia, the United Arab Emirates and other oil-producing autocracies appeared to be little more than a continuation of his agenda as CEO of Exxon Mobil to promote the global production and consumption of fossil fuels.

Still, when it came to the administration’s foreign policy, Tillerson reportedly helped to keep some of Trump’s most dangerous impulses in check and demonstrated at least some respect for protocol and international cooperation.

Pompeo, by contrast, is a right-wing ideologue who will only reinforce Trump’s most dangerous, reckless and militaristic instincts. A West Point graduate, Pompeo will be yet another former military officer to hold a top position in the Trump administration. Richard Boucher, a career diplomat who has served as an ambassador and State Department spokesperson under both Democratic and Republican administrations, observed how Trump has been “looking for people who see every problem as a threat that needs to be dealt with by military force, rather than an issue that can be countered through diplomacy.”

While many current and former State Department officials have referred to Tillerson as the worst Secretary of State in their lifetime, it appears that it won’t take long for Pompeo—who first came to Congress as part of the right-wing Tea Party movement in 2010—to surpass him in that dubious distinction.

When it comes to the UN-ratified nuclear agreement between Iran and seven major governments, Pompeo has said he is looking forward to “rolling back this disastrous deal.” As a congressman, he urged the United States to bomb Iran during the sensitive negotiations, insisting that going to war was a better way to prevent Iran from developing nuclear weapons than a binding and enforceable negotiated treaty. Claiming that Iran is “intent on the destruction of our country,” he has insisted that the United States “must act to change Iranian behavior, and, ultimately, the Iranian regime.”

On Israel, Pompeo has been an outspoken supporter of the policies of right-wing Prime Minister Benjamin Netanyahu, including the ongoing occupation and colonization of the Palestinian West Bank. In 2016, when Israeli occupation forces faced criticism from Amnesty International and other human rights groups for extra-judicial killings of Palestinians in the occupied territories, Pompeo responded by praising what he referred to as the Israeli military’s “admirable restraint,” commending them for their “professionalism” and thanking them “for all they do.”

He has openly expressed his support for the use of torture and other violations of the Fourth Geneva Convention by both the United States and allied governments, praising those implicated in torture at Guantanamo Bay as “patriots,” and insisting that Democratic senators who question the use of such illegal methods “put American lives at risk.”

Another frightening implication of Pompeo as Secretary of State regards the United States’ relations with countries that are majority Muslim, a faith he has relentlessly stereotyped and demonized. Claiming Islam is a “threat to America,” he has said that the alleged failure of some American Muslim leaders to not more vigorously condemn acts of terrorism constitutes a kind of collective guilt that makes them “potentially complicit.”

While Tillerson, despite being a former oil company executive, opposed Trump’s decision to withdraw from the Paris Climate Agreement, Pompeo—who has close ties to the billionaire Koch brothers and has refused to even acknowledge climate change—supported Trump’s action, claiming that the United States was “bow(ing) down to radical environmentalists” by joining the rest of the world’s nations in signing the accord.

There is little hope that the Senate will block Pompeo’s nomination. He not only received unanimous Republican support for confirmation as CIA director last year, he was also backed by 15 Democratic senators, including minority leader Chuck Schumer, ranking Intelligence Committee member Dianne Feinstein and 2016 vice-presidential nominee Tim Kaine.

During the 2016 presidential campaign, Trump disingenuously tried to outflank Hillary Clinton from the left on foreign policy, criticizing her hawkish record and claiming he would be less interventionist, less militaristic and put “America first.” As with his pledges to pursue economic policies that challenge Wall Street, support the country’s workforce and “drain the swamp,” Trump’s nomination of Mike Pompeo for Secretary of State is yet another signal that his decisions are the opposite of what he promised.

Stephen Zunes is a professor of Politics and International Studies at the University of San Francisco. Read more of his work at stephenzunes.org.