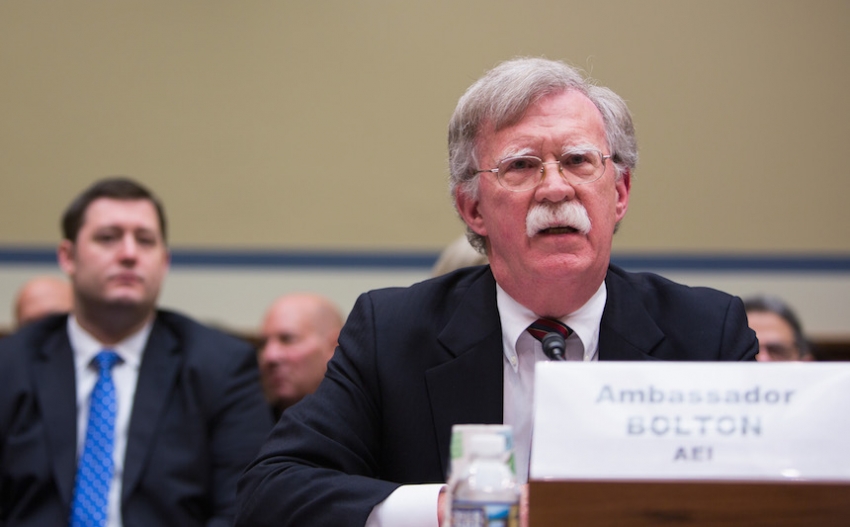 John Bolton will replace H.R. McMaster as Trump's new national security adviser. Bolton has been a militant advocate for regime change in both Iran and North Korea and has repeatedly called for an end to the Iran nuclear deal. (Tasos Katopodis/Getty)

In a sane society, people like Bolton wouldn’t be allowed on television, much less put in charge of American security.

People called 'hawks' in Washington, a euphemism for 'murderous maniacs,' often get supported one way or another by the arms industry.

John Bolton helped lie our country into an illegal war of aggression that killed several hundred thousand Iraqis, wounded over a million, and displaced 4 million from their homes, helped deliver Baghdad into the hands of Iran, and helped create ISIL, which blew up Paris. In a just world, Bolton would be on trial at the Hague for war crimes. Instead, he has been promoted into a position to do to Iran what he did to Iraq.

The acceptable political spectrum inside the Beltway in Washington DC is a marvel to behold. Bernie Sanders, a long-serving senator and public servant won 13.2 million popular votes to 16.8 million votes for Hillary Clinton (i.e. he was backed by 43% of one of the two major parties in the country). But Sanders was virtually blacked out from corporate television coverage during his impressive presidential bid, while Jeff Zucker turned CNN over to Trump every night at 7:30 pm throughout the summer and fall of 2016 and just let him talk, or whatever he does, for an hour without even a semblance of journalistic analysis. Supposedly left-leaning MSNBC did the same thing.

America’s corporations love the fascist side of the spectrum, which is obvious from the way they promoted Trump and Trumpism. Zucker also hired Cory Lewandowski, who was at the time contractually obligated to avoid criticizing Trump, as a CNN commentator. Fascism after all favors big corporations and vilifies and punishes workers and the poor. Under Mussolini, the Italian poor were plunged into much deeper poverty.

Television news also loves the maniacal side of the spectrum. You seldom see normal people as commentators on cable news, and much of the commentary is polarized and superficial and often simply incorrect on the facts of the matter. Sometimes it is even just a criminal conspiracy. During the Iraq War, the NYT revealed that the Pentagon successfully pressed on CNN a gaggle of former generals, many of them actively making money off of the Iraq War through contracting while they were promoting it on television. They presented an Alice in Wonderland view of the brutal US occupation of that country as a shining success. Tom Fenton, a career television journalist, once wrote a book suggesting that television news is so bad that it is actually a standing risk for US security, since an uninformed or misinformed public cannot play the democratic role of watchdog and is not being alerted to genuine threats. Maybe the maniacs draw eyeballs and increase advertising dollars. Maybe Wall Street doesn’t see people as maniacs as long as they advocate giving billionaires more money.

The fascination with the far right wing and with the maniacal dovetails in the person of Bolton, now Trump’s National Security Adviser. Jesus said that if the blind leads the blind, both will fall into a ditch. The ditch in this case could well be a ruinous war with Iran.

In an sane society, people like Bolton wouldn’t be allowed on television, much less put in charge of American security.

Bolton has assiduously tried to do the same thing he did to Iraq to Iran. Big corporations like wars. Wars mean you have to manufacture more shiny children-murdering weapons and bombs, the ultimate in planned obsolescence. No war, and the factories fall silent and the money-counting stops. People called “hawks” in Washington, a euphemism for “murderous maniacs,” often get supported one way or another by the arms industry. Sometimes it is direct and their bank accounts should be examined.

Iran has never had a nuclear weapons program, and as long as the nuclear deal holds, it has no opportunity to develop them. It has no heavy water reactor. It has a limited number of centrifuges. It destroyed its stockpile of uranium enriched to 19.5% for its medical reactor. It is being actively inspected. No country under active UN arms inspections has ever developed a bomb.

Bolton wants to bomb Iran so badly that he does not care about these facts. He wanted to bomb Iran himself if he could, sort of like Slim Pickens in Dr. Strangelove. If not he wanted to have the Israelis do it.

The Bulletin of Atomic Scientists that keeps that clock showing how many minutes the world is away from a nuclear midnight can put it away. With Bolton’s appointment, it is past midnight.

Juan Cole (www.juancole.com) is professor of modern Middle Eastern and South Asian History at the University of Michigan and author, most recently, of Sacred Space and Holy War.