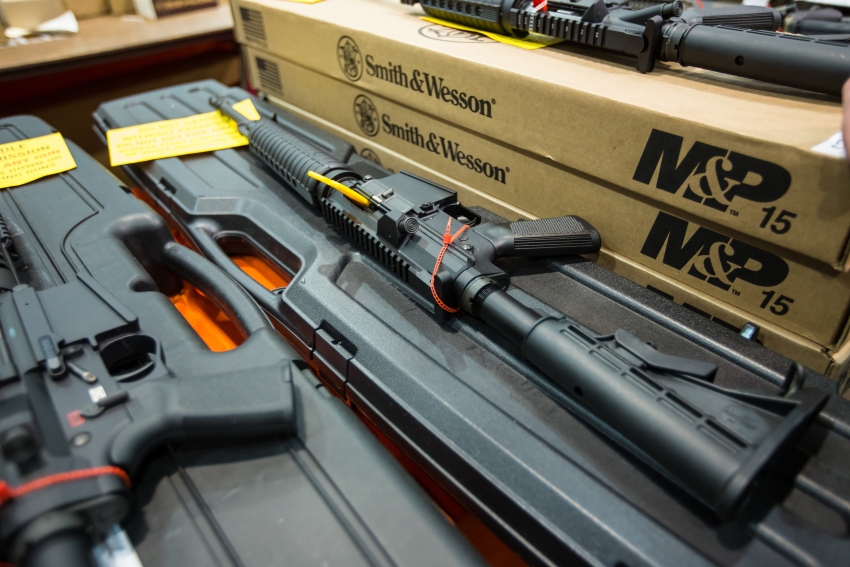 How America Is Exporting Gun Violence to Mexico

The United States is the world’s largest arms producer, with impacts across the hemisphere and beyond.

On May 18, the country awoke to news of yet another school shooting. This one occurred in Santa Fe, Texas, a small town outside of Houston. A 17-year-old shooter killed 10 high school students with his father’s gun, just months after 17 students were killed at Parkland High School. The recent shootings have rekindled a national conversation about the disproportionate levels of gun violence in the United States and the lax laws regulating gun purchase and use.

Yet missing from the mainstream conversation is an examination of how the U.S. government’s gun policies exacerbate violence in neighboring countries, particularly Mexico. Some 70 percent of guns recovered in Mexico in the last five years originated in the United States. Some of these guns come from the legal transfer of hundreds of millions of dollars in guns to Mexican police and military forces, which often wind up in the hands of criminal organizations, fueling violence. Guns also come from illegal gun trafficking facilitated by easy purchasing requirements, as well as lax regulations and documentation.

In 2017, Mexico had the highest homicide rate since the peak of its drug war in 2011, with nearly 30,000 people murdered. Some 70 percent of guns recovered in Mexico between 2011 and 2016 originated in the United States. According to a new report from the Center for American Progress (CAP), the proportion of murders in Mexico committed with firearms has skyrocketed in the last two decades: In 1997, 15 percent of Mexico’s homicides were committed with a gun, whereas by 2017, this number had jumped to 66 percent.

“Gun regulations in the United States are clearly associated to violence in Mexico and in other countries,” Eugenio Weigend Vargas, co-author of the CAP report, told In These Times. Weigend Vargas pointed to a number of factors leading to this rise in gun violence in Mexico—in particular, the end of the U.S. government’s federal ban on assault weapons in 2004. A 2013 study found that homicides, gun-related homicides and crime gun seizures in Mexican border states rose between 2004 and 2013, with the exception of Mexican states bordering California, which retained its assault weapons ban.

Guns reach Mexico both through legal gun exports and through illegal gun trafficking. According to the CAP report, 298,000 guns per year are legally exported from the United States, while almost the same number are illegally trafficked. Weigend Vargas attributes illegal gun trafficking to two key factors: Assault weapons are legal in the United States, and there are loopholes for those who are restricted from purchasing guns. Though some states require background checks for purchasing guns, these are usually not checked at gun shows. “So anybody with a criminal record, or a gun trafficker, can get to a gun show and purchase four, five AR-15s and AK-47s, and then smuggle them to Mexico,” Weigend Vargas said.

Meanwhile, the United States has multi-million dollar contracts with military contracting companies, such as Sig Sauer, Inc, to deliver these guns, according to John Lindsay-Poland, who runs the Stop U.S. Arms to Mexico program at the American Friends Service Committee (AFSC). AFSC published a report in late 2016 on the harmful impact of legal gun sales to Mexico, including their role in exacerbating the country’s crisis of disappearances.

For instance, the report notes that some of the guns uncovered in the investigation of the disappearance of 43 students from Ayotzinapa, a rural teacher-training college in the state of Guerrero, were found to have originated in the United States. The municipal police in nearby Iguala possessed 20 assault rifles produced by the United States-based manufacturer Colt, which the Mexican government had purchased in 2013, according to data cited in the report from Mexico’s Secretariat of Defense.

There is no protocol to ensure the guns sold to Mexico legally are not used to commit human rights violations, Weigend Vargas says. “The question is, what kind of protocols do we follow when sending guns to military personnel or police agencies in other countries?”

These sales are occurring in addition to the U.S. government’s security cooperation program with Mexico, the Mérida Initiative, which since its launch in 2008, has sent at least $2.5 billion in aid to Mexico as part of an effort to combat drug cartels in the country. However, the hard-fisted effort, whose strategy has primarily relied on taking down cartel bosses, is widely believed to have increased violence in the country, because with no one in charge of the major cartels, these criminal organizations have splintered as they compete with one another to reassert dominance over the drug trade, and diversified their income streams. In this chaotic environment, there is little accountability for federal, state and local police as well as the military, whose abuses and collusion with these criminal organizations are treated largely with impunity.

U.S. law prohibits U.S. security aid from being sent to units that have credibly committed grave human rights violations. In 2015, the State Department cut off military assistance from Mexico’s 44th battalion, found to be involved in the extrajudicial killing of 22 people in Tlatlaya, Mexico. A 2016 report from the Open Society Justice Initiative concluded that both the Mexican military and the Zetas drug cartel have committed crimes against humanity in the context of Mexico’s drug war. But aid and weapons sales have otherwise continued to flow to the notoriously corrupt Mexican police and military, which often works in collusion with criminal organizations in the country.

Paulina Arriaga Carrasco writes in a 2016 report for the Mexican NGO Desarma México (Disarm Mexico) that guns intended for public security forces are “susceptible to diversion to organized crime” or human rights abuses. Arriaga Carrasco affirms that in Mexico there is also a lack of transparency and access to information about gun purchases from the United States.

Meanwhile, gun laws in Mexico are actually quite strict. There is only one gun shop in the entire country, and people who wish to purchase them must pass a series of background checks, prove their employment, lack of criminal record, and get fingerprinted. But as Kate Linthicum recently reported for the LA Times, every day this store sells an average of 38 guns. Meanwhile, 580 are trafficked from the United States daily.

The issue of U.S.-sourced guns in Mexico is not a new one. President Enrique Peña Nieto and his predecessors, Felipe Calderón and Vicente Fox, have all denounced the United States for its failure to control gun trafficking. They have also pointed out the role of U.S. drug demand in fueling violence. Ahead of this year’s presidential elections in Mexico, the frontrunners—left-wing Andrés Manuel López Obrador, center-right Ricardo Anaya and centrist José Antonio Meade of the ruling Institutional Revolutionary Party (PRI)—have publicly stated that unabated gun trafficking from the United States is responsible for a significant proportion of gun-related homicides in Mexico. Meade has even proposed that Mexico build its own wall to stop gun trafficking from the United States.

And yet, President Donald Trump announced a proposal on May 15 to loosen laws around international gun exports, by shifting their transfer from the State Department to the Commerce Department. It’s worth noting that the gun industry contributed more than $30 million to the Trump campaign via the National Rifle Association (NRA), as Lindsay-Poland wrote for NACLA in 2017.

The NRA has also pushed laws that would cut funding from Bureau of Alcohol, Tobacco, and Firearms (ATF), the division of the U.S. Justice Department that conducts research on the use of U.S.-sourced guns in other countries, which Weigend Vargas notes is severely underfunded, meaning there is a lack of data about how U.S. guns affect violence in other countries. The CAP report recommends that ATF receive more funding to improve its data. But this is unlikely, he says, in the current political environment.

Laura Weiss is Managing Editor at NACLA Report on the Americas. She has a Master’s degree in Latin American and Caribbean Studies from NYU.