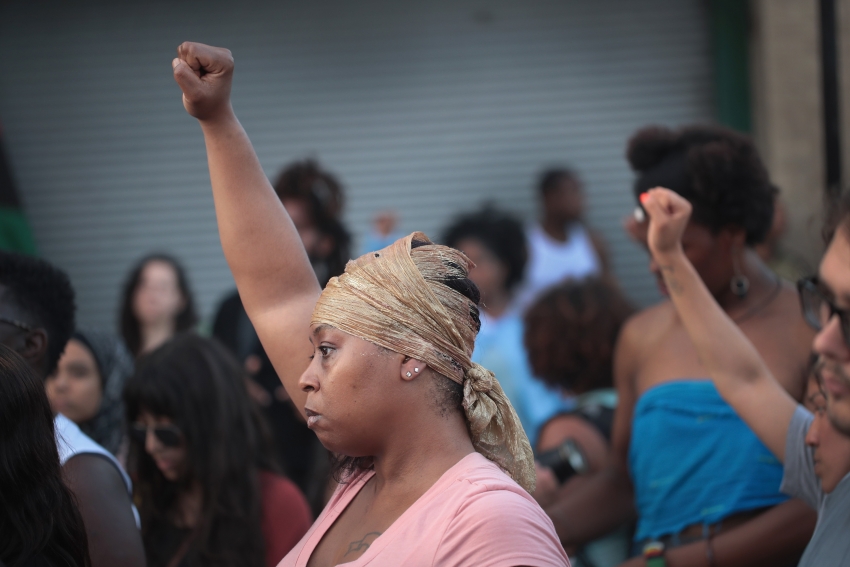 On Chicago police, economic violence and the Black resistance movement.

Policing in the United States directly grew from slave patrols in the South and rich people’s guards in the North.

Despite national and local “reforms,” the endemic issue of police killings persists across the United States. In Chicago, the latest wave of police murders resulted in three deaths within the span of weeks. The Chicago Police Department (CPD) murdered Maurice Granton Jr. on June 6. On July 3, Chicago Police  murdered Terrell Eason. And then on July 14, Chicago Police murdered a 37-year-old father and beloved community barber, Harith “Snoop” Augustus.

It is impossible to understand police killings without looking at institutional racism. In Chicago, four out five people shot by police are Black. Black unemployment in the state of Illinois is the highest in the nation, and in some neighborhoods in Chicago, unemployment is as high as 50 percent. Between 1999 and 2012, white Chicagoans saw their incomes increase 33 percent to an average income of over $100,000. However, Black Chicagoans have seen our incomes decrease by 4 percent to an average household income of $44,000. Within this environment, Mayor Rahm Emanuel has overseen the largest public school closing in U.S. history, as well as the closing of half of the City’s mental health centers—both of which overwhelmingly impacted Black neighborhoods. These neoliberal policies have decimated the city’s already fragile mental healthcare system and produced disastrous academic results for students. These factors are part of the reason why Chicago is the most segregated city in the United States.

Despite warnings from community groups and teachers that foretold the dire outcome of gutting community resources and institutions, the prevailing neoliberal ideology held that public institutions must be run as businesses, with profit margins set as the barometer of success. This logic is a consequence of neoliberal capitalist belief system that has divested from the public commons nationwide, in order to privatize education and healthcare—and destroy unions. This politic produces devastating results for the majority who do not benefit from the immense profit that is produced for the tiny few.

Within this context, we situate the fact that Chicago’s largest budget item is policing, at over $4 million a day and over $1.5 billion a year. Chicago has the most police per 1,000 people in the country. Policing is capitalism’s answer to the economic and social crisis created by extreme divestment and gutting of services imposed by the prevailing neoliberal political order.

Policing in the United States grew from slave patrols in the South and rich people’s guards in the North. Their function remains the same: to adhere to the dictates of the ruling class and protect their wealth. During slavery, wealth was produced by human bondage in the South, and property in the North. This system of armed wealth protection aimed to prevent uprisings. Today, law enforcement is used to perpetrate union busting, harassment, surveillance and the terrorizing of populations considered hostile to the ruling forces. This means that laws are never equitably applied to those of us who are considered a threat.

We must reject the notion that merely having a gun makes Harith—or anyone—a “criminal.” Illinois is a concealed-carry state, and Harith had a Firearm Owners Identification (FOID) card in his wallet, which the police initially denied. As of this writing, the police state they did not find a concealed carry permit, which is different from a FOID card. However this does not mean that Harith did not have one, nor does it mean that he deserved to die. Harith had a right to walk down the street and not be harassed and stopped by Chicago Police. But because Harith was a Black man in Chicago’s South Side, his mere existence was deemed criminal and subject to state repression. His Second Amendment rights are ignored by mainstream coverage of his murder—and are absent from any propaganda by the National Rifle Association. To the prevailing social and political order, Harith did not have a right to have a gun and therefore deserved to be shot and killed.

This logic, however, was not applied to Dylann Roof, a white supremacist who committed a mass shooting in a Black church and was driven to Burger King by the police once they had him in custody. Nor was it applied to the white supremacist militia in Oregon that held a standoff with local law enforcement. Harith’s working-class Black personhood relegated him non-human and non-citizen under the prevailing white supremacist logic of neoliberal capitalism.

Protesters who immediately descended on the scene after Harith was murdered were met with police violence, underscoring the hostility with which law enforcement is taught to view this demographic. This treatment stands in stark contrast to the national warm welcome afforded to the Parkland students who have organized against the mass shooting they experienced in Florida, as well as the police-escorted “protest” in Chicago against “gun violence,” which occurred exactly one week prior to Harith's murder by the CPD. The Parkland students are overall whiter and richer and therefore legitimized humans and citizens—an identity never afforded to poor Black people.

Over the past several days, protests have persisted, condemning Rahm Emanuel's complicity in the deaths of Harith, Maurice, Terrell and the countless others murdered by Chicago Police. Connections have also been made tying the destruction of public institutions in our communities to the preponderance of police. People have called for Rahm’s resignation, charges against the officers who brutalized protesters, charges against the offer(s) who killed Harith and a release of all of the audio and video footage. As an organizer with Black Lives Matter - Chicago, I echo and support these demands. Our organization is also calling for a rigorous condemnation of policing, as well the entire system of capitalism which necessitates the inequality and poverty imposed on our communities in order to produce immense wealth at our expense for the very few. Last year, billionaires earned enough to end poverty seven times over.

Chicago, a Democratic stronghold, should correct any illusion that the Democratic Party, as one half of the bi-party ruling system, will produce any significant livable alternatives for Black people. In fact, the opposite is true. Under Democratic mayor after mayor, former police commander Jon Burge oversaw the torture of more than 110 Black men and boys; Chairman Fred Hampton and Deputy Mark Clark were murdered through a conspiracy between the FBI, CPD and state’s attorney; and Emanuel hid the video evidence of the murder of Laquan McDonald in order to win mayoral re-election.

Faced with increasingly unlivable conditions, our movement’s politics must reflect the accurate reality that we are living under. We must be bolder in our analysis and fiercer in our demands. To end police killings, we must end policing as we know it, which necessitates the upending of capitalism.

Aislinn Pulley is an organizer with Black Lives Matter Chicago. She was an organizer with We Charge Genocide, a founding member of Insight Arts, a cultural non-profit that used art for social change, and a member of the performance ensemble, End of the Ladder. She is a founder of the young women’s performance ensemble dedicated to ending sexual assault, Visibility Now, as well as the founder and creator of urban youth magazine, Underground Philosophy.