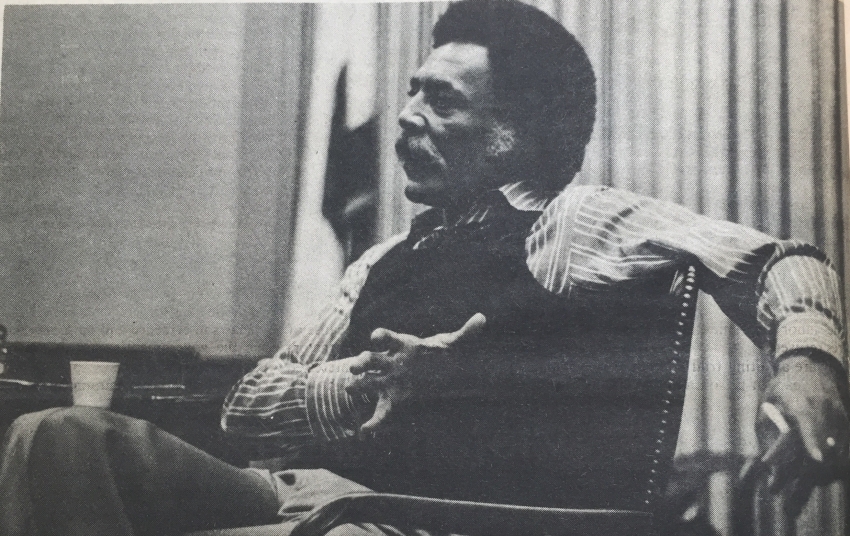 "Basic human needs like food cannot be corporate questions"—Ron Dellums. (In These Times)

“Democratic Socialism Will Prevail”: An Interview with Ron Dellums in 1976

Dellums, a democratic socialist member of the House of Representatives, was interviewed in the first issue of In These Times, saying “if democracy means anything, it should mean a government of all the people, by all the people, for all the people.”

"I think democratic socialism will ultimately prevail in this country because it makes an enormous amount of sense."

Ron Dellums passed away on July 30, 2018. He was a lifelong activist and served as an open democratic socialist, first in the U.S. House representing California and later as the mayor of Oakland. He would go on to serve as the co-chair of the Democratic Socialists of America (DSA). In the debut issue of In These Times in November 1976, John Judis interviewed Dellums and wrote about the growing left movement in the East Bay. Here we present that interview in full.

SAN FRANCISCO—By the fall of 1974, it looked as if the movement on the Berkeley campus and in the Oakland ghetto had its last gasp. The campus was quiet. The April Coalition, Berkeley's main community organization, had fallen apart under pressure of defeat and factional strife. After losing the Oakland mayoral election, Bobby Seale, a Black Panther leader, had decided to leave the party. And Huey Newton, the party leader, had fled the country to avoid prosecution.

Two years later it looks as if the movement is coming back to life, largely under the leadership of Rep. Ronald V. Dellums (D-Calif.). Dellums and other East Bay activists have rebuilt the coalition into Berkeley Citizen's Action, which in the spring of 1975 captured two seats on the Berkeley City Council and the office of auditor. They have built an electoral coalition in the greater East Bay that includes BCA, the Panthers, the Oakland Democratic clubs, the city and county unions and Berkeley and Oakland neighborhood organizations.

This November, the coalition-backed slate of Dellums for Congress, Tom Bates for state assembly and John George for county supervisor won by a 2-to-l margin.

Coalition members have a common vocabulary but stress different terms in describing their goals. “If you support us,” George said during the campaign, “you are saying that you want to go on an adventure to restructure American society.” Bates emphasized popular power. “I want to see the government decentralized and power returned to the communities,” he said.

Other BCA members, including Dellums, speak of democratic socialism as the goal. “I would like to see an economy where all the basic decisions about basic industry and basic resources are made by the public,” Ilona Hancock, a Berkeley city council member and BCA activist said.

This outlook has been translated into support locally for rent control, public ownership of utilities, publicly controlled industrial development and the rights of women, minorities and labor.

Unlike much of the old movement, however, coalition efforts are focused on elections. “One of the critical things about elections,” Lee Halterman, one of Dellums' aides, told In These Times, “is that it gives you a forum in which to talk to people that just isn't available elsewhere. If you knock on someone's door during an election, you have legitimacy.”

While local elections are nonpartisan, state and congressional ones are not. In 1970, Dellums decided to challenge incumbent Jeffrey Cohelan in the Democratic primary rather than risking defeat and a Republican victory in a three-way contest. Coalition members defend that strategy. “At this point,” Hancock said, “the Democratic party is the vehicle for reaching most of the American people with a program for a better society.”

The recent success of the BCA and of Dellums, Bates and George has led Republicans and moderate Democrats to charge that Dellums is building an East Bay “machine.”

Dellums denies the charge. “I have always maintained that it is a movement, a direction in politics,” he told In These Times, “but the establishment finds it difficult to deal with ideas, so they have to find a way of putting their won corrupt label on it.” Hancock also rejects the charge. “I find the whole business amusing,” she said. “A machine by any other name might be a movement or a political community.”

ITT: An article in the Nation a while ago said you are the closest thing to a socialist elected to Congress in 20 years. Your approach seems like the socialist ideal of uniting working people against corporate power to establish popular ownership and democratic control of society's basic wealth. Is that your view?

RD: I think democratic socialism will ultimately prevail in this country because it makes an enormous amount of sense. We have to ask if the problems in society can be solved while we are propping up the major corporations. Right now the politician's codeword is the “tradeoff of unemployment for inflation,” but that's simply a way to ask if one is committed to the 10 or 12,000,000 unemployed or to the top 50 corporations in the U.S. Obviously, the Ford administration, and perhaps President-elect Jimmy Carter, are committed to fighting inflation, to propping up the corporations as opposed to dealing with the human misery of unemployment. But if democracy means anything, it should mean a government of all the people, by all the people, for all the people….

People have asked, does that mean you are a socialist? Because I advocate society and the government dealing with the basic human services I guess my answer is yes. The government ought to be in the business of delivering health, education, housing and basic services to people without a lot of game playing. There ought to be comprehensive childcare, a comprehensive approach to housing, a sane, rational way to finance education. But I also strongly believe in the notion of fundamental individual freedom. The government should not do everything for everybody all the time, but it should provide basic services to everyone who needs them. Education ought not be contingent on income or where you live. Neither should health.

ITT: What about energy and food?

RD: Basic human needs like food cannot be corporate questions. It frightens me that the food business, from the growers to the distributors, is rapidly becoming dominated and controled by a few corporations, some of whose names give no notion that they grow, process or distribute food. That's dangerous because if there is one thing people ought to be able to do unencumbered by the complexities of economics, it's eating—a simple proposition. When you complicate eating with economics, you have missed what life ought to be about.

Similarly with energy. We are now moving away from fossil fuel, but why should these corporations own the sun if you have solar energy or own the wind if you have windmill generators or control the earth if we have geothermal energy. And why should private corporations build nuclear power plants without first solving the technical health problems that are inherent in nuclear reactors? Those things ought to be owned and controled by the public.

We have not done that because the government has not controlled the corporations, but has been controlled by them. That is why our democracy is more symbolic than real.

ITT: Over the past few years, a number of candidates who share your views have been elected to office in the East Bay. Do you see this as the beginning of a movement?

RD: Yes, people in this community are trying to develop a continuity of critical ideas, so that a person who carries the banner of “new politics” into the electoral arena is no more than that—someone who carries a banner….It's not a machine; it's the beginning of a movement.

ITT: What principles define this movement?

RD: Our politics are based on four things: a value base, a perceptual frame of reference, a set of goals and objectives and a strategy by which to seek these. First, we operate from the humanistic value that life is the most precious thing on earth. Not bullets and bombs, or property and money, or prestige status. But life. If you accept that value, there are enormous ramifications, because then you logically oppose war, pollution, racism and sexism—all things that endanger or inhibit life.

ITT: Is classism another word for capitalism?

RD: Yes. We live in a class society, one with Rockefellers and paupers. There is something inherently wrong with that. It is in direct violation of the concept of democracy for a handful of people to control the wealth and to have influence that goes far beyond even the actual dollars. So we start with a humanistic value system and ask: What inhibits life and growth? The answer is war, pollution, elitism, corporate corruption, corporate power that controls over 90 percent of the wealth and dominates people's lives.

Third, our objectives are to eradicate the conditions that keep some people in abject poverty, hunger and disease, while the society protects the extraordinary wealth of others. We oppose a politics that makes a priority of building Bl bombers and not of building for people in our communities.

Fourth, strategy? Coalition politics that brings people together around mutual self-interest. We bring black, brown and yellow people together, women, students, senior citizens, working-class people, poor people around their common oppression. The degree to which you are able to attract a broad range of people all committed to the eradication of their oppression is the degree to which you can develop a broad political movement. My running for Congress was simply a test of the idea that in one of the most diverse congressional districts in the U.S. it was possible to create an effective people's coalition. And for three terms this district—71 percent white—has elected a black person, which means that we are capable of going beyond the dimension of race and come together around other kinds of concerns. … Status quo politics perpetuates the misery of most people and benefits only a very small group. Our politics have to be for change. The American reality is that money is concentrated in the hands of very few people, with the rest of us forced to fight each other for a share of what's left.

John Judis is a founding editor of In These Times.