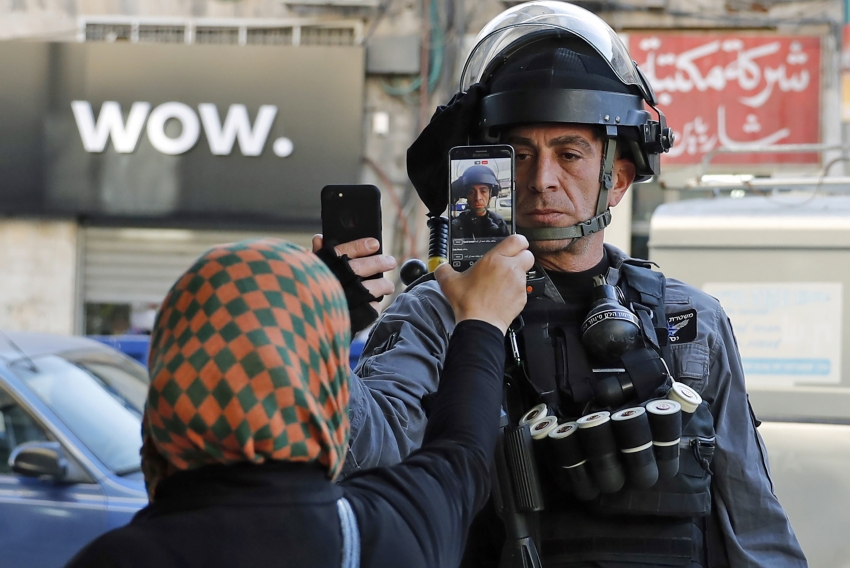 A Palestinian woman takes a picture of a member of the Israeli security forces as he takes her picture in a street in Jerusalem on December 16, 2017. (AHMAD GHARABLI/AFP/Getty Images)

There Is a Coordinated Campaign to Suppress Criticism of Israel

Though I was generally familiar with the situation, nothing prepared me for the extent of systematic racism and state-sponsored terror inflicted upon Palestinians until I was actually there.

This U.S. legislation coincides with Israel’s own efforts to crack down on its critics. As Israel continues to engage in gross human rights violations against Palestinians, Israel and its allies in U.S. Congress are trying to prevent Americans from traveling to Palestine to see the situation with their own eyes—and from speaking out about it. As activists, we cannot sit back quietly and allow this to happen.

One of the latest targets of Israel’s attempt to prevent further exposure of its systematic human rights abuses was Omar Shakir, the director of Human Rights Watch in Israel-Palestine, who came close to being deported by Israel on May 24, in a blatant attempt to clamp down on criticism of its human rights record. While his deportation has temporarily been halted by an Israeli court, its prospect is still very much looming and is meant to silence human rights activists.

Several other human rights leaders were previously banned or deported. On April 29, Vincent Warren, the executive director of the Center for Constitutional Rights (CCR), and Katherine Franke, the Chair of CCR and Professor of Law at Columbia, were denied entry to Israel. They were detained for 14 hours at the Ben Gurion International Airport and interrogated about their affiliation with human rights organizations that have criticized Israel for its treatment of Palestinians.

In October 2017, Raed Jarrar of Amnesty International was also detained and questioned for hours, then denied entry. He was on a personal trip to visit his family in Palestine after the death of his father. This past July, five members of an interfaith 22-person delegation were also denied entry, reportedly because Israel had given Lufthansa a black list.

I had a similar experience in May 2014 as part of a National Lawyers Guild delegation. We were planning to look into the situation of Palestinian political prisoners. Israeli authorities first targeted me because of my Iranian birth. I was told to sit and wait like the many other Arabs, Muslims and Palestinians were. The officials then researched my background and found out my affiliation as the then president of the National Lawyers Guild. I was subjected to five rounds of interrogations over 11 hours.

Unlike Jarrar, I was ultimately allowed in. This was before the law that went into effect in March 2017 that bans entry to foreigners who have called for boycott of Israel or even the settlements, which are illegal towns that Israel builds on occupied Palestinian lands.  Had I gone in the past year, I may have been barred as well (the National Lawyers Guild passed a boycott and divestment resolution in 2007 in line with the 2005 Palestinian civil society call).

I had a powerful and sobering experience during my week in Palestine. Though I was generally familiar with the situation, nothing prepared me for the extent of systematic racism and state-sponsored terror inflicted upon Palestinians until I was actually there. We met many survivors of human rights violations, including young children who had been imprisoned and physically abused by Israel. We met an elderly woman living in East Jerusalem half of whose house had been occupied by settlers originally from New York, and we gathered with the courageous people of Bil’in during their weekly protest against the occupation wall. We also met with the family of Rachel Corrie, the young American woman crushed to death by an Israeli military bulldozer in 2003, who were there for a hearing at the Israeli Supreme Court against the Israeli military (the court exonerated the Israeli military of responsibility for its crime).

We also met with families of political prisoners whose houses were raided in the middle of the night and whose sons were prosecuted on spurious grounds. as well as the Palestinian residents of Hebron who have to constantly watch out for rocks and feces thrown by settlers. We spoke with lawyers who were denied basic information about their clients, as well as  Palestinians formerly incarcerated through the Israeli military court system that, according to the State Department, has a conviction rate of over 99 percent for Palestinians.

We compiled our findings into a report called Prisoners of Injustice, which is focused on the state of injustice for Palestinians caught up in Israeli prisons, mostly because of acts of political protest. We have shared the report widely and continue to publicize the situation of imprisoned Palestinians, often drawing parallels with the incarceration of political prisoners and immigrants in ICE detention in the US, and the methods of resistance the prisoners employ, including hunger strikes.

This type of awareness-raising is exactly what Israel is afraid of as it rapidly loses the publicity attempt to frame itself as a democracy. This is illustrated through the continuing success of the Boycott, Divest, and Sanctions Movement (BDS), which calls for the boycott of Israel until it ends violations of Palestinian rights. Among many celebrities who have canceled their appearances in Israel are the New Zealand singer-songwriter Lorde as well as Elvis Costello, Lauryn Hill and Gorillaz.

As Palestinians commemorate the 70th anniversary of Nakba, the mass killings and evictions of Palestinians in 1948, and new laws in Israel that further clamp down on the self-determination of Palestinians go into effect, we must continue to stand by Palestinians in their struggle against colonialism, displacement and systemic racism. One way to do that is to visit Palestine in person and hear and learn from Palestinians directly, despite mounting obstacles engineered by the Israeli government. Another way is engaging in BDS campaigns despite new repressive laws introduced in the US Congress.

We can learn from what the Movement for Black Lives did in the summer of 2016. After their delegation to Palestine, they included a demand for BDS in the Vision for Black Lives. They faced massive backlash from pro-Israel organizations, but they stuck by their principles. The organization Dream Defenders could not have said it better: “For the children who are met with tear gas and rubber bullets as they walk home from school, for the families of those we have lost to police violence, for the communities devastated by economic violence and apartheid walls, we fight. To all those who believe in a world in which all people are free, join us. For those who no longer stand with Black people because of this belief, goodbye. We do not need nor want you in our movement.”

Azadeh Shahshahani (@ashahshahani) is Legal and Advocacy Director with Project South and a past President of the National Lawyers Guild.