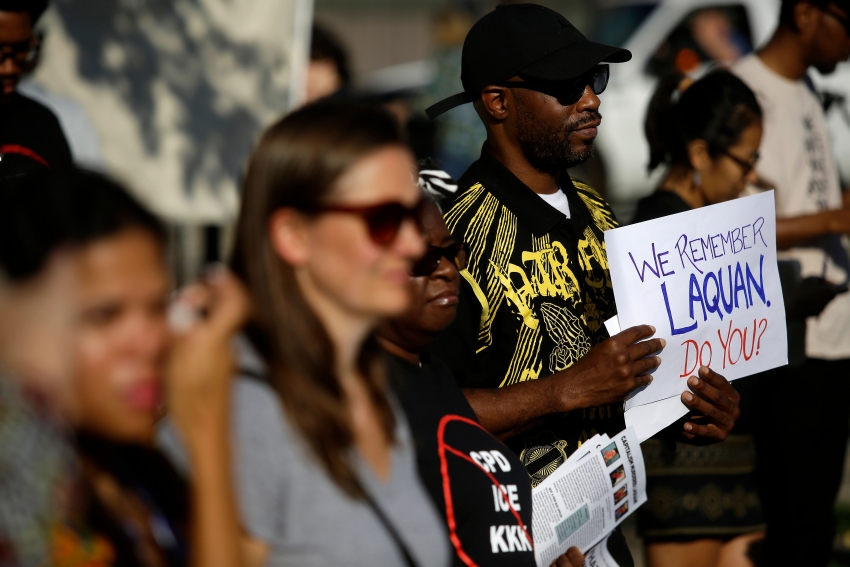 Locking up killer cop, Jason Van Dyke, won’t address the root cause of his violence.

How do we remain steadfast in resisting the police state, rather than relying on it to punish its own agents?

This week, the landmark trial of officer Jason Van Dyke began in Chicago, raising critical questions about what justice for police killings can—and will—ultimately look like.

In October 2014, Van Dyke lethally shot 17-year-old Laquan McDonald 16 times, an act that was recorded by the police department’s own dash cam. The city refused to release the tape for 400 days—long after mayor Rahm Emanuel’s reelection—leading to widespread protests and accusations of a coverup. As a result of the scandal, police superintendent Gary McCarthy—who is currently running for mayor—was fired, and State’s Attorney Anita Alvarez was voted out, after a meticulously-led community campaign known as #ByeAnita.

On Tuesday, the day before jury selection for the trial, mayor Emanuel announced that he would not be seeking a third term—a shock to many of his political allies. Whatever heat is about to emerge as a result of the Van Dyke trial, Emanuel doesn’t want to be around to catch it.

Angela Davis, in a twitter video encouraging community to show up to a demonstration held by grassroots organizations outside the courthouse, noted that “Van Dyke is one of the first officers to be charged with first degree murder of a Black man in the history of this country.” She’s right. The killing of Black youth by law enforcement is incredibly common, yet for law enforcement to be convicted for those murders is essentially unprecedented.

The #BlackLivesMatter movement was birthed in response to the lack of accountability for police who steal the lives of Black people. One of the most pressing questions the movement has raised is: What role (if any) does the state play in holding itself accountable? “Indict, convict, send those killer cops to jail!” has been a rallying cry since the movement’s inception. Yet, so have calls for civilian oversight of the police, as well as their demilitarization, defunding—and even their total disbanding.

The trial of Van Dyke is historic, but it is also a reckoning. There are community organizations, and family members who have lost loved ones to police killings, calling vehemently for the officer’s conviction. It would be a mistake to ignore these voices and the healing they seek. Yet will justice for Laquan, for all lives lost to state violence, ever come in the form of a conviction? Will locking up a killer cop work to curb state violence, or to reestablish faith in the very systems—prisons, courts, police—that are its source?

Such moments are a test of our commitment to abolition—the belief that inherently racist structures like the police system must be permanently dismantled—not as a theory, but a practice. Calls for a conviction are clearly rooted in love for Laquan and a desire to see his killer held responsible for the pain he’s caused. But even if Van Dyke is imprisoned for the rest of his life, he will be locked away with thousands of Black and Brown people who themselves deserve freedom. The hood in which he murdered Laquan will remain without adequate schools, mental health facilities, green space and quality housing. Police will continue to kill Black youth, and the overwhelming majority of them will never be held to account.

How do we remain steadfast in resisting the police state, rather than relying on it to punish its own agents? How do we dream bigger than convictions, recognizing that the lion’s share of convictions in this country target Black people, immigrants and the poor—and do not protect them? What models for police accountability exist that teach us to shrink the state’s purview, not expand it?

The scathing report released by the Department of Justice after Laquan’s murder condemned overtly racist practices at every level of the Chicago Police Department (CPD), but also notes that training facilities are in “disrepair.” The Emanuel administration used concerns about training “inadequacies” to slate the construction of a $95 million police academy in West Garfield Park, even after the city closed public schools and health clinics across the South and West Sides. The administration relied on the murder of Laquan to up spending on the same violent institution that took Laquan’s life.

Though this decision was an insult to Black communities, it also emboldened a new campaign, #NoCopAcademy. Organizers (full disclosure: I’m one of them) opposed to further spending on the CPD—which already receives 40 percent of the city’s general fund—canvased over 500 residents of Garfield Park, and released their own report, detailing the myriad suggestions community members had for spending on resources other than the police.

The campaign #EraseTheDatabase, led by immigrant organizers, demands the dismantling of the CPD’s gang database—a roster containing the names of up to 195,000 Chicagoans who police suspect to be gang members. The campaign calls not for legal action against those who oversee the database, but for the destruction of the tool itself, which is regularly used to justify the deportation of undocumented residents.

A commitment to abolition—and a focus on the victims of state violence rather than its perpetrators—requires we shift our attention from punishment to restoration. It demands we look beyond the limited options for accountability offered us by the state to seek solutions that put power and resources back in the hands of oppressed communities.