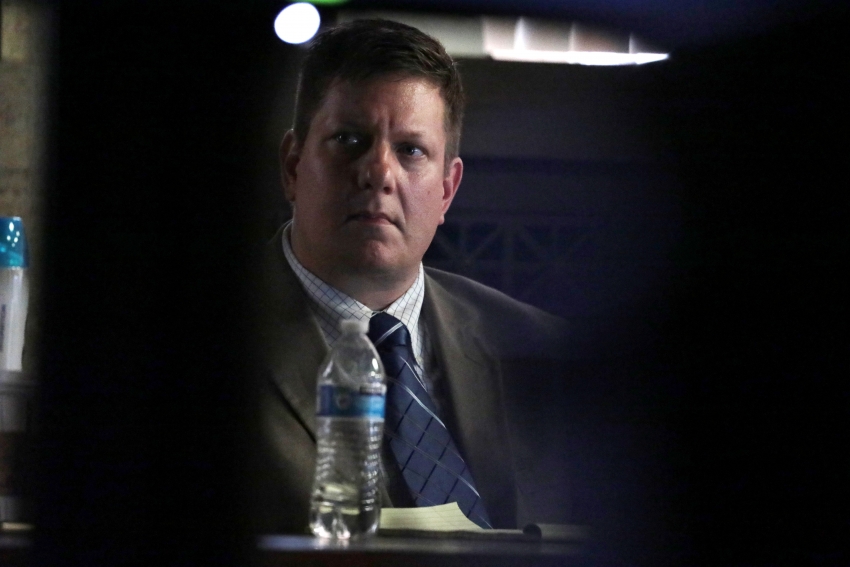 On fighting for justice, this side of revolution.

We must show up and demand that Chicago police officer Jason Van Dyke be held accountable for the 2014 murder of Laquan McDonald—right now in this capitalist, imperialist, heterosexist, transphobic, violent country. To pursue the ambitious goals of police and prison abolition, people’s movements must force the system, as it exists right now, to be held accountable to its own rules—because this is part of its undoing. Maintaining constant pressure and resistance to police and prison legitimacy is an intervention. It is a challenge of power. Looking away is, in effect, an act of complicity in the ruling order of police impunity.

Abolition, the belief that the current policing and prison system is inherently unequal, brutal, torturous and violent and therefore must no longer exist, requires that the entire system of capitalism be eradicated. Policing and prisons house and contain capitalism’s excess labor—and maintain social control of a population that faces mass unemployment, stagnant wages, unaffordable housing and increasingly violent natural disasters. Mass incarceration exists because of capitalism, not in spite of it, emerging as a component of the neoliberal political order that took hold in the 1970s and began to flourish in the 1980s.

We must understand that, in order to upend this system and achieve abolition, we cannot simply turn our faces away from demanding accountability right now. A true people's uprising is organized masses in motion making a conscious decision to take power. This confidence and empowerment, to make real our right to self-determination, is built, in part, by taking action right now. That is what it means to organize to demand the state hold itself accountable to its own rules every time it murders us. It means showing up for Laquan McDonald right now by demanding Van Dyke be convicted. It means taking certain powers of the state and putting them into the hands of the people. It means organizing a mass democratic revolt to make this happen. It means relying on the power of the people to make change—and not relying on an utterly corrupt, racist system of policing to change itself. Because it will never change itself.

There is no way one can wish a revolt into existence. Abolition will not be actualized without the conscious and active dismantling of the current systems. We have to agitate and organize. If we are not willing to do that, then all we have left is a vision of freedom that we are not willing to fight and die for, which means we have become complacent slaves, complicit in our own oppression. The people have an inalienable democratic right to demand consequences for the police who are an occupying force in our communities. We, the people, have an inalienable right to resist police tyranny and racist repression in every instance that it exists, including demanding that the state use its own weapons against itself. This right is denied by those who exploit and oppress us, because they have interests in using police as instruments of social control.

It is because of the people’s movement that Van Dyke stands accused of murder. And if he gets convicted it will also be because of this. Van Dyke was arrested and charged with first-degree murder only because thousands took the streets after the dash-cam footage of Laquan’s execution was finally ordered to be released through a judge after having been hidden by Rahm Emanuel for over a year. It is the consequence of the hundreds and thousands of young people who took to the streets in rage that Van Dyke is on trial now. This outrage forced the system to concede. We are not relying on the existing repressive state to punish police crimes: It will never do that. We are relying upon the people to force the state to carry out the will of the people. And that, too, is our inalienable democratic right.

On September 19, the presiding judge in the trial of Van Dyke issued an edict restricting people from attending the trial by requiring the public to register a day in advance before being allowed to enter the court. This restriction is a punitive measure designed to prevent the public from accessing what could be the first conviction of a white police officer murdering a Black person in the history of Chicago. This is a reflection of the state’s fear of the power of the people.

Also on September 19, former Chicago Police Commander, Jon Burge, died. Burge oversaw the torture over 120 Black and Latinx people from 1972 to 1991. The full breadth of the torture he led is unknown to this day, with additional survivors still emerging, including many who remain incarcerated based on false confessions that were produced through the torture Burge and his henchmen inflicted. The torture included tying people to chairs, giving electric shocks to genitals, placing plastic bags over heads to induce suffocation, waterboarding, mock executions and other horrific abuses. Not one officer has ever been prosecuted for these crimes of torture. In fact, many Burge torture survivors remain incarcerated to this day, while over $22 million in pension payouts to Burge’s collaborators remains on going.

These two incidents are connected because they underscore the fallacy of the “bad apple” narrative and reveal the systemic reality of police torture and murder—policing as it normally functions against Black people in the United States. Jon Burge never was held accountable for the torture he committed and oversaw. Instead, due to the expiration of the statute of limitations, Burge was found guilty of perjury and served three and a half years in prison. After being released early for good behavior, Burge was still allowed to receive his pension. For many survivors, and those who worked for over two decades to bring to light the horrific abuses inflicted by Burge, his perjury sentence was not enough. This outrage birthed the historic reparations ordinance for the survivors of Chicago Police torture, which was initially conceived as part of imagining what possible true justice could look like.

This ordinance remains the first and only of its kind in the United States and includes a $5.5 million payout to survivors, a public apology from the City, a creation of a public memorial, a requirement to teach the history of Burge torture in Chicago Public Schools and free access to the City colleges for survivors and family members. Since the announcement of Burge’s death, survivors have and will continue to experience a variety of emotions. Burge merely dying is not justice served. In fact, a loved one of a currently incarcerated torture survivor summarized this by saying, “He was never held to account for what he did.”

Achieving true justice, however, does not mean that we do not fight for the state to hold itself accountable to the laws it imposes on us right now. True justice likely will not be achieved in our lifetime, but we can make important contributions to the generations ahead who will carry the torch of this freedom-making. In building our power to resist the violence of the state as it is experienced today, we—in turn—are building a world in which that violence no longer exists. It is imperative that we continually bring to the forefront the hypocrisy and contradictions that are foundational to the narratives that allow our current systems of injustice to flourish. Advocating for abolition does not preclude this.

We must demand Van Dyke be held accountable. We must also articulate that true justice is the complete overhaul and end of this entire police system which exists precisely to protect the inherent inequality of capitalism. Turning the weapons of the state onto itself is an act of building up and exercising our own power.

Aislinn Pulley is an organizer with Black Lives Matter Chicago. She was an organizer with We Charge Genocide, a founding member of Insight Arts, a cultural non-profit that used art for social change, and a member of the performance ensemble, End of the Ladder. She is a founder of the young women’s performance ensemble dedicated to ending sexual assault, Visibility Now, as well as the founder and creator of urban youth magazine, Underground Philosophy.

Frank Chapman was wrongfully convicted of murder and arm robbery in 1961 and sentenced to life and fifty years in the Missouri State Prison. His case was taken up by the National Alliance Against Racist and Political Repression (NAARPR) in 1973, and in 1976 he was released after being incarcerated for 14 years. In 1983 he was elected Executive Director of NAARPR. He worked with Charlene Mitchell, who preceded him as Executive Director of NAARPR, and with Angela Y. Davis on building an international campaign to free Rev. Ben Chavis and the Wilmington Ten, Joann Little, Geronimo Pratt, Leonard Peltier and others falsely accused and politically persecuted. He was a part of the international campaign to Free Nelson Mandela. He has been a part of leading the struggle in Chicago for the past five years to stop police crimes, especially murder, torture, beatings and racial profiling. He is presently Field Organizer and Educational Director of the Chicago Alliance Against Racist and Political Repression. He believes in the inalienable democratic of right of Black people to determine who polices their communities and how their communities are policed. In other words, in community control of the police.