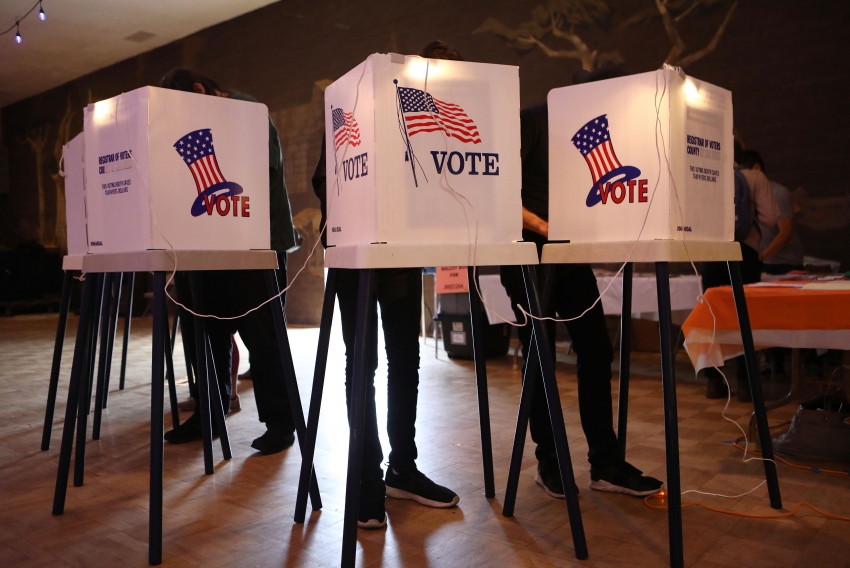 We are set to see a record turnout of 18- to 34-year-olds for a midterm election. (Photo by Mario Tama/Getty Images)

Yes, Voter Suppression Is Real. But Young Voters May Bridge the Gap.

The midterms are rigged against people of color and the poor.

The critical 2018 midterms will determine whether the 116th Congress can put the brakes on President Donald Trump and the Koch-Adelson agenda. The outstanding question is: Will enough Democratic voters turn out November 6 to overcome institutionalized efforts at voter suppression?

In 1789, the U.S. Constitution allowed the states to determine which of their residents would be allowed to participate in elections. Initially, all states extended the franchise only to white men who owned land or paid taxes. Since then, progressive activists have fought—and died—to secure voting rights, while the forces of reaction, presently incarnate in today’s Republican Party, have sought to limit who is granted access to the ballot box.

For example, 6.1 million Americans are denied the vote because of a felony conviction, a restriction that disproportionally disenfranchises people of color and the poor. Not coincidentally, 4.2 million are residents of the 11 states that were part of the Confederacy, all of which currently have GOP-controlled legislatures. In Florida, this restriction bars more than 10 percent of the voting-age population from voting.

Another tactic in the vote-suppression toolbox is to require that voters present specific forms of ID. In Texas, an estimated 600,000 registered voters (and many more unregistered voters) lack the required identification. Again, it is no accident that such laws disproportionately affect people of color and the poor.

Not to mention periodic purges of the rolls, which the GOP has turned into an art form. Those purges accelerated after 2013, when the Supreme Court, in Shelby County v. Holder, overturned a 1965 Voting Rights Act provision that regulated elections in 15 states with a history of racial discrimination (including nine former members of the Confederacy). Between 2012 and 2016, for example, Georgia purged 1.5 million voters—twice as many as between 2008 and 2012—under the pretense that it was keeping the voting rolls accurate and up-to-date. Such purges tend to target black people who vote Democratic, and are therefore both racist and partisan.

The security of voting infrastructure is also a concern, with voter registration rolls particularly vulnerable. According to a July 13 indictment arising from the Mueller probe, Russian hackers tried to penetrate the voting systems of 21 states in 2016. In Illinois, they accessed “names, addresses, partial social security numbers, dates of birth, and driver’s license numbers” of approximately 500,000 voters.

J. Alex Halderman, a University of Michigan computer scientist, told the electronic industry magazine, EE Times, “Russia was in a position to do more damage than they did. They could have changed voter registration data, but they didn’t.”

On a related note, in July, the FBI reported that the private company that hosts Maryland’s voter registration system is controlled by Vladimir Potanin, a Russian oligarch with close ties to Russian President Vladimir Putin.

All that is the bad news. The good news is that on the Left, electoral politics is being enthusiastically embraced, particularly by young people. According to Pew Research surveys, 2018 will see a record turnout of 18- to 34-year-olds for a midterm election. What’s more, 57 percent of millennials who are registered to vote plan to vote for Democrats, and only 37 percent for Republicans. Voting habits and political commitments are established when people are young. Given the enthusiasm among youth for the common sense social democratic proposals of Bernie Sanders and rising stars like Alexandria Ocasio-Cortez, we have reason to hope that 21st-century America, marked thus far by lawless wars and hideous inequality, may break its fever and begin a turn toward something like common decency.