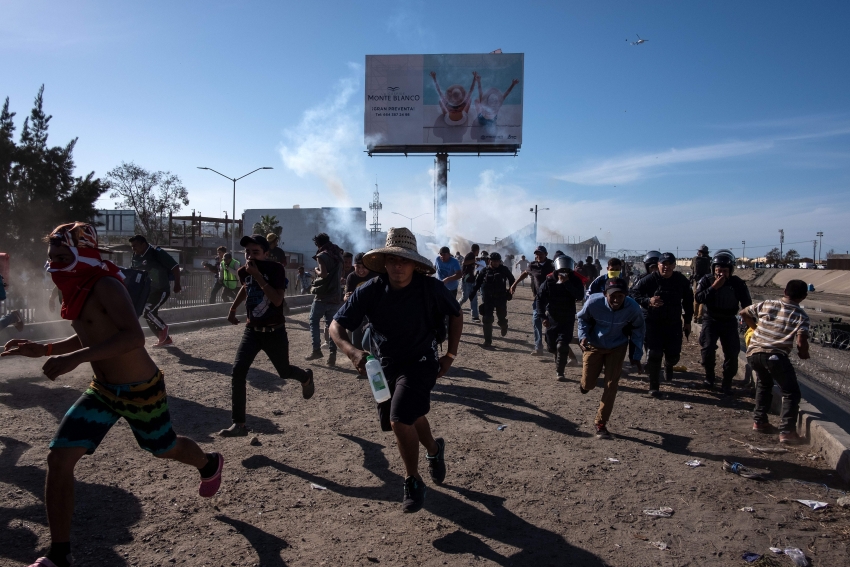 Witness: I Am On the Refugee Caravan and Saw the Tear Gas Attack. Here Are Our Demands.

There aren’t words to describe that moment when tear gas was used to attack a human wall asking for the possibility of applying for asylum.

On Sunday, the United States fired tear gas on asylum seekers—including children—at the San Ysidro crossing between San Diego and Tijuana. In the days since, the Trump administration has doubled down on its violent stance on the southern border.

President Trump has smeared the refugees as “stone cold criminals,” while Customs and Border Patrol Commissioner Kevin McAleenan hit the media circuit to defend the attack. On Monday, Homeland Security Secretary Kirstjen Nielsen made the outrageous—and baseless—assertion that children are being used by refugees as “human shields,” echoing rhetoric used to justify Israeli attacks on Palestinians. NPR reported Wednesday that Trump is “expected” to extend the deployment of active-duty U.S. troops—who now have permission to use lethal force against refugees—into next year, rather than withdrawing them in December.

In the face of this onslaught, asylum seekers—primarily from Central American countries—are not giving up. They are mobilizing behind a series of demands calling on incoming Mexican President Andrés Manuel López Obrador, the United Nations and the U.S. government to take immediate action to stop the violence, halt arbitrary deportations and “protect the human rights of migrants at all times.” Many of those demanding entry into the United States come from countries that have been torn apart by U.S. policies, from enforcing free trade to backing right-wing governments—including the 2009 coup in Honduras. That country has since seen a dramatic escalation in violence against labor organizers and indigenous activists.

In These Times spoke with Milton Benítez, a participant of Honduran social movements and host of the popular television program El Perro Amarrillo, who witnessed Sunday’s tear gas attack. Benítez, who was named by the caravan assembly as one of its negotiators with the UN in Mexico City, explains that many refugees are experiencing “deep sadness because they came from repressive countries only to be confronted with a highly militarized country, throwing tear gas from helicopters.”

While some have returned home, he says, many asylum seekers remain—and are calling on people throughout the United States to protest and demand that refugees are allowed entry.

In These Times: Describe the U.S. government's tear gas assault on asylum seekers in Tijuana. What happened and how are people doing now? What is the current mood among those seeking asylum?

Milton Benítez: There aren’t words to describe that moment when tear gas was used to attack a human wall asking for the possibility of applying for asylum. It made the people lose the last bit of trust they had in the UN. On previous occasions, the exodus had asked to be recognized as a humanitarian crisis. But nevertheless, there has been silence.

The people are now in stupor and shock. Some people even started to leave Tijuana on Monday and return to Honduras. The migrants didn’t imagine that United States would contradict its laws. I think that generated a deep sadness, because they came from repressive countries only to be confronted with a highly militarized country throwing tear gas from helicopters.

These were scenes we were able to, as a media outlet, record in the moment — when they were throwing the tear gas from the helicopters, and also just tossing tear gas grenades. All of this exposed people to a very precarious health situation. I don’t have the words to describe that kind of collective panic. The people were fenced by a curtain of tear gas that came close to endangering the lives of children.

Milton Benítez: The absence of the opportunities exacerbated the levels of violence. Let’s recall that Honduras has been victim of extractive politics that the United States, Canada and Europe implemented. Likewise, free trade agreements like the Free Trade Area of the Americas and the Central America Free Trade Agreement are all linked to the corrupt governments in our area. By the way, three days ago, Antonio Hernández, the brother of the Honduran president Juan Hernández, was caught on narco-trafficking charges. The court argued that Antonio Hernández conspired to bring drugs into the United States.

A dichotomy exists between society and the state, which reprimands any sign of public discontent, which is a product of extractive policies and growing debt. Honduras is beholden to the International Monetary Fund, among other financial institutions. All of this is causing never-before-seen levels of poverty in our country, with over 60 percent of the population living at or below the poverty line. In other words, tomorrow in Honduras, a significant portion of the population will wake up without any chance of eating, and one out five survive on a little more than dollar a day.

And then there’s the corrupt political class. More than 100 deputies are currently involved in corruption cases. Ministers of the regime, the ex-president of the central bank, and other corrupt individuals, have confessed to conspiring against Honduran society. Two years ago, this brought on an intervention from the Organization of American States, which launched the “Mission to Support the Fight against Corruption and Impunity in Honduras.” The results are mixed.

It's worth highlighting that, in the last couple of years, we’ve started resembling the Colombian privatization model popularized by Álvaro Uribe Veélez. The United States, if you’ll remember, also installed the Puebla-Panama Plan that Colombianized our country. And even though Colombia’s strategy against narco-trafficking was never effective, it was nevertheless implemented in Honduras, and this only generated more violence. It turned us into one of the most violent countries. And so, the people fled the country.

The idea that the migrants are groups organized by political parties has been debunked. No, it’s the hunger, the misery, the pain and—of course—the structural corruption that forces our compatriots to flee only to encounter this ignominious reality.

In These Times: What are asylum seekers planning next, given the U.S. government's crackdown? What are your aims and goals?

Milton Benítez: The migrants are waiting for the UN to define their central politics, which is the objective of the December 10 Intergovernmental Conference to adopt the Global Compact for Safe, Orderly and Regular Migration. The UN’s role in this case has been disastrous.

The migrants outlined five demands: an end to arbitrary deportation; to make public the names of the deported; for incoming Mexican President Andrés Manuel López Obrador to negotiate a solution for migrants who wish to stay in Mexico; to speed up the application process for asylum to the United States; and to protect the human rights of migrants at all times.

We’re hoping for American organizations to argue for more asylum cases to be heard, for those who opt for asylum in the United States.

In These Times: Many people in the United States are horrified at the violence against border crossers. How can they show solidarity? What concrete steps they can take?

Milton Benítez: I think that concrete steps are to pressure the Democratic senators to agree to a worldwide compact on migration, that unifies 192 countries. Other things include peaceful protest that demands that cases of asylum that deserve attention are rightfully heard. Also, the Latino population can continue to write to Democratic and UN officials for the migrants to be heard and be allowed entry—to avoid the unjustified repression from Gringo authorities.

In These Times: Is there a message you want to send people in the United States right now? Is there anything you haven't said that you want to communicate to our readers?

Milton Benítez: I think that this is an important moment in human history. I think that humanity should focus on the hundreds of people who seek succor from being governed by corrupt officials and extractive policies that deplete our resources and public goods. This is one of the, speaking socially and politically, most painful moments of the last 50 or 80 years. This is an expression of countries convulsing socially because of the poverty and systemic corruption.

Juanpablo Ramirez-Franco is an editorial intern for In These Times and Documenter at City Bureau.

Sarah Lazare is web editor at In These Times. She comes from a background in independent journalism for publications including The Intercept, The Nation, and Tom Dispatch.