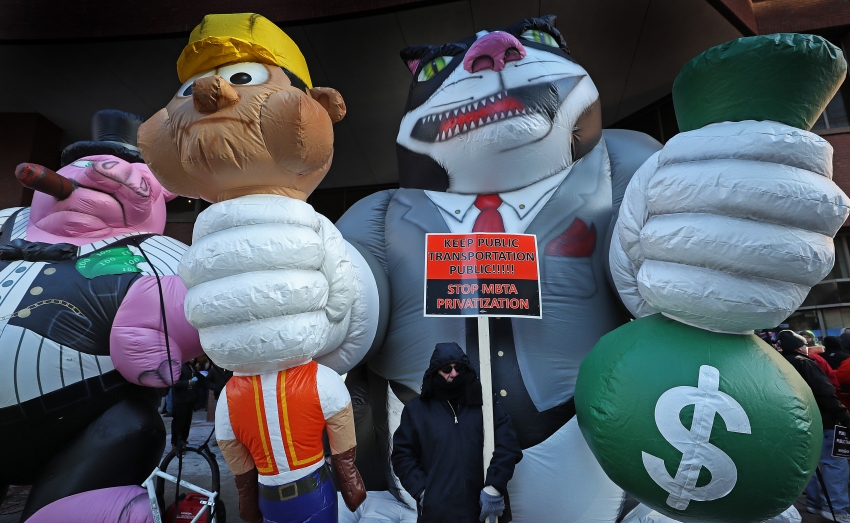 The evidence is in and the verdict is clear: Privatization is bad for working people. (Photo by David L. Ryan/The Boston Globe via Getty Images)

After 3 Decades, Privatization Has Been Proven a Failure. Let’s Bury It for Good.

Handing public assets and services over to the free market has been a boon for corporate America and a disaster for the working class.

The time is ripe for progressives to demand public—i.e. democratically managed—solutions to our most pressing problems.

New York Rep. Alexandria Ocasio-Cortez’s suggestion to raise the top marginal tax rate to 70 percent has reignited a long overdue debate about taxation. The idea that lower taxes on corporations and the wealthy is key to a healthy economy—known as “trickle-down economics”—has been the mainstream political consensus since the 1980s.

By explaining that massively increasing taxes on the super-rich can help fund social programs like Medicare for All, tuition-free college, a jobs guarantee and a Green New Deal, Ocasio-Cortez has rightly disrupted the politics of austerity that has dominated both major political parties for decades.

Now is the time to burst a similar—and deeply related—bubble: The myth that the privatization of public goods and services “saves taxpayer money.” Much like trickle-down economics, privatization is a choice—meaning, it’s ideologically and politically motivated. And it’s pushed by the same corporate interests that profit from its implementation.

Like austerity, privatization has boomed at all levels of government since the 1980s. There were more government employees when Ronald Reagan won reelection in 1984 than when Barack Obama won reelection in 2012. It’s estimated that three-quarters of workers that serve the American public actually work for private contractors. The Pentagon alone obligates more than $300 billion to contractors each year.

This shift has been backed by the claim that the “free market” is more efficient and innovative than government. Privatizers argue that outsourcing school cafeteria workers, bus drivers or nurses at Veterans Affairs hospitals cuts costs for taxpayers. Yet they don’t mention that such cuts often come out of workers’ paychecks—if those workers are even lucky enough to keep their jobs. When privatization policies are carried out, “innovation” often simply means layoffs and decreased wages and benefits.

And when it comes to saving money, the evidence is mixed at best. In many cases, privatization turns out to be far more costly. A 2007 survey found that over half of the local governments that placed services back under public control did so because privatization didn’t cut costs. After Iowa hired insurance corporations to manage its Medicaid program in 2017, the average cost of insuring people climbed nearly three times as fast as when it was under public control. An Indiana toll-road built using private financing—known as a “public-private partnership”—launched in 2014 by then-Gov. Mike Pence turned out to be $137.3 million more expensive than if the state had used traditional public financing. Charter schools, which are publicly funded but privately operated, are costing San Diego’s school district $65.9 million a year. And then there’s healthcare, an area where the United States spends twice as much as other countries thanks to a “free market” of private doctors, nurses, hospitals and drugs.

Politically, privatization kills two birds with one stone for fiscal conservatives. It reinforces the idea that public budgets are inevitably “tight,” rather than because taxes have been cut to the bone, particularly for the wealthy. But more directly, it weakens labor unions representing teachers, sanitation workers and other public sector employees.

Last year’s Janus v. AFSCME Supreme Court ruling was the latest chapter in a concerted right-wing effort to shrink unions, one of the “five pillars” of Democratic Party support in the words of Republican strategist and tax cut guru Grover Norquist.

In fact, the decades-long campaign to push privatization policies has gone hand-in-hand with efforts to slash taxes on the wealthy, bust unions and target the rights of working people.

As their profits began to wane in the 1970s, the leaders of powerful U.S. corporations developed what had been a free market-fundamentalist, intellectual pursuit by thinkers such as Milton Friedman and Friedrich von Hayek into a political strategy, known today as neoliberalism. As just one sign of this coordinated effort, the number of corporate PACs increased from under 300 in 1976 to over 1,200 by 1980. Conservative think tanks such as the Heritage Foundation and public figures like Norquist churned out influential anti-government propaganda, popularizing the idea that the public sector should be “limited.” These neoliberal champions were so successful that the idea of running government “like a business” is now conventional—and bipartisan—wisdom.

Central to this economic philosophy is a focus on “choice,” which now holds a mystifying power in American politics. Charter schools, the centerpiece of “school choice” rhetoric, are expanding from red states like Arizona to blue cities like Los Angeles and Washington, D.C. Donald Trump’s expansion of the VA Mission Act further privatized veterans’ health care. Obamacare, originally a Heritage Foundation pipe dream, is meant to increase the number of choices in the insurance marketplace.

Who doesn’t want choices? Yet the goal of the “choice” rhetoric is to obscure the more significant choices that have already been made by policymakers without input from working people—to perpetually cut taxes on corporations and the wealthy, to invest more and more in police and prisons, to close public schools and to defund social programs.

Ocasio-Cortez’s proposal of a 70 percent marginal tax rate on the wealthy, and its welcome reception from the American public, offers an important lesson. The time is ripe for progressives to demand public—i.e. democratically managed—solutions to our most pressing problems, like slowing climate change, providing healthcare, fixing infrastructure and guaranteeing high-quality education to all students.

We should bury the idea that privatization as an approach to public policy is anything but ideology meant to make the wealthy wealthier on the backs of working people. Then, with any luck, the rest of the Democratic Party will follow suit.