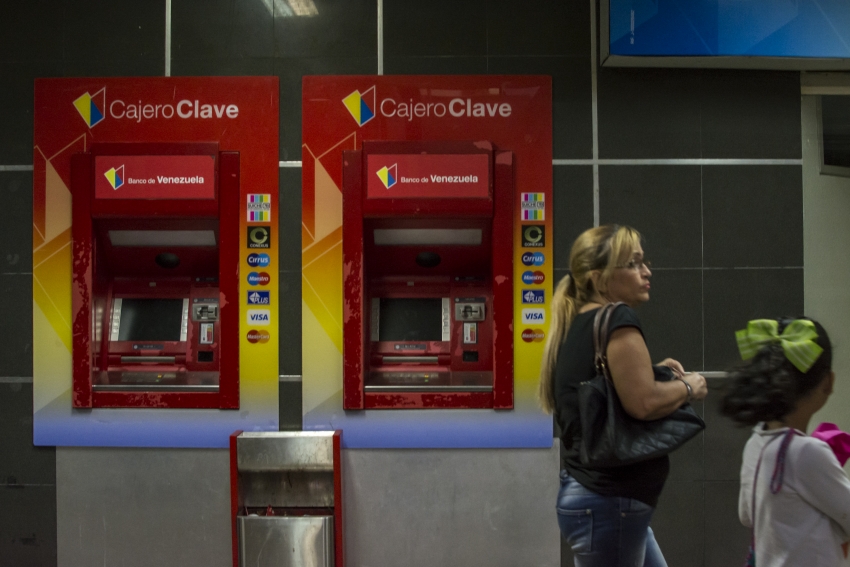 The United States imposed sanctions on 22 March 2019 on several banks belonging to the Venezuelan government. (Photo by Rafael Briceño Sierralta/NurPhoto via Getty Images)

Sanctions are a violent tool of U.S. control. And now this tool is in Trump’s hands.

Regardless of their devastating results, the use of sanctions against “unruly” countries is a frequent U.S. foreign policy tactic, often posed as the only alternative to an invasion.

On May 8, nearly a year to the day since the U.S. pulled out of the Iran nuclear deal, the Trump administration slapped a fresh round of sanctions on Iran, whose economy is already reeling.

The Iran sanctions are but the most recent example of a U.S. foreign policy tool that consistently causes or exacerbates humanitarian crises. For a preview of what Iran is likely to suffer, we can look to another country currently in U.S. crosshairs: Venezuela.

The devastating effects of the Trump administration’s broad economic sanctions, first imposed against Venezuela in 2017, were exposed in a paper released on April 25 by economists Mark Weisbrot and Jeffrey Sachs—who has served as a special advisor to three UN Secretaries-General—on behalf of the Center for Economic and Policy Research. The sanctions have deprived the Venezuelan economy of “billions of dollars of foreign exchange needed to pay for essential and life-saving imports,” the report explains. The result was a staggering 40,000 total deaths in 2017 and 2018 and more than 300,000 Venezuelans put at health risk due to a lack of access to medicine or treatment. The paper received brief press coverage in the last week of April of this year, but was quickly overshadowed by opposition leader and self-declared interim president Juan Guaidó’s third failed coup attempt.

Using the same rhetoric of emergency, the Trump administration extended the sanctions to target Venezuela’s financial institutions. The administration froze billions of dollars of Venezuelan government assets held in the U.S., from gold reserves to trade credits to oil funds from CITGO. At the same time, the U.S. impeded Venezuela’s ability to restructure its debt and perform routine financial activities; prohibited Americans from doing business with Venezuela’s oil company, PDVSA; and pressured other international actors like India to enforce Venezuela’s economic isolation.

While the sanctions ostensibly target government officials and assets, the burden falls not on the government “but on the civilian population,” according to Weisbrot and Sachs. The sanctions have pushed inflation into hyperinflation and will cause Venezuela’s GDP to drop by 37.4 percent in 2019, the authors estimate.

Juan Carlos Rosales, a father of five from just north of Caracas, has experienced the toll of sanctions firsthand. Rosales’ 14-year-old son broke his arm weeks ago and has been unable to obtain surgery due to a shortage of medical supplies. The crisis has touched the family in other ways. Thanks to hyperinflation, the money that once covered a month’s worth of education, medicine and food “does not even cover a piece of candy,” Rosales says. Unable to afford food, Rosales depends on the government’s Local Committees for Food Distribution and Production, better known by their Spanish acronym CLAP. The “public services subsidized by the state,” he says, have made the crisis “less painful.” Unfortunately, in late May, the U.S. prepared to sanction the food aid program, accusing officials of using it to launder money.

It must be noted, as Keymer Ávila, a professor of criminology at the Central University of Venezuela told In These Times via email, the U.S. sanctions are not the original cause of Venezuela’s crisis. The “collapse of oil prices,” most recently in 2014, in a “rentier” state that relies almost exclusively on the nationalized oil industry for revenue, was merely the trigger, Ávila argues. The collapse was worsened, Ávila says, by “decades of improvised decisions,” a “lack of transparency,” “clientelism,” and “corruption and widespread embezzlement” on the part of various Venezuelan governments, from before Chávez to Maduro. None of this, however, should be used to whitewash the history of U.S. intervention in Venezuela or the violence of the domestic opposition, on display, for example, in the 2017 helicopter attack on the Supreme Court. Nor does it invalidate the successes of the Chávez regime, chief among which, as Greg Grandin notes, are drastic reductions in “poverty, inequality, illiteracy, child mortality rates and malnutrition.”

Rather, a crucial task of the Left is to recognize the current failures of the Venezuelan state while defending its sovereignty. Part of the latter is recognizing the consistently devastating effects of sanctions.

Sanctions have a long history of worsening conditions for those that they purport to protect. While they are often billed as “targeted” or “smart” to minimize civilian damage, the brunt of the burden falls upon the most vulnerable, as the CEPR report makes clear is the case in Venezuela.

Perhaps the most notorious case of the deadly application of sanctions was against Iraq in the wake of Saddam Hussein’s invasion of Kuwait on Aug. 2, 1990. Resolution 661, enacted by the UN Security Council on August 6, demanded that UN Member States refrain from trading or carrying out financial transactions with Iraq. After the Persian Gulf War ended in late February 1991, these sanctions were codified in Security Council Resolution 687. President George H.W. Bush made clear that the UN sanctions would not be lifted “as long as Saddam Hussein is in power.”

As evidence mounted over the next five years that the sanctions were killing hundreds of thousands of children, the U.S. continued to pressure increasingly skeptical Security Council members into compliance. Asked in 1996 about the death of as many as 500,000 children due to malnutrition exacerbated by the sanctions, then-U.S. Ambassador to the UN Madeleine Albright infamously replied, “[The] price is worth it.”

While later studies would revise the estimate downward—a 1999 analysis found that as many as 227,000 children under 5 were killed as a result of the war, the great majority due to sanctions—and highlight the role of Hussein in aggravating the conditions, the figures remain stark. Many point out that the supposed alternative to military intervention killed more civilians between 1990 and 2000 than did the Iraq War from 2003 to 2011. One UN official described the effects as “genocide.” The sanctions were only lifted in 2003, after the original U.S. goal, regime change, was successful.

When the call comes from within

To be sure, sanctions can sometimes be a tool of social movements, as in the anti-apartheid sanctions on South Africa, officially imposed by the U.S. in 1986 yet called for much earlier by activists around the world. The crucial distinction, says Garrick Ruiz, former North America Regional Coordinator for the Palestinian BDS National Committee, is, “Who is asking for sanctions?” In the case of South Africa, Ruiz says, sanctions were “a way for the international community to engage in solidarity with the people of the country.” A strong international grassroots movement pressured companies, universities and governments to comply. In the end, the New York Times noted in 1993, the sanctions “helped hasten the end of apartheid through a combination of psychological and economic pain.”

Ruiz and others channel the legacy of that fight in the Boycott, Divestment and Sanctions (BDS) movement against Israel. The 2005 Palestinian call for BDS was “signed by just a huge swath of Palestinian civil society,” Ruiz says. It called upon civil society organizations and “people of conscience” to impose “broad boycotts” and “divestment initiatives against Israel similar to those applied to South Africa.” Following the call, the Palestinian BDS National Committee was formed as the coordinating body for the BDS campaign. Activists, seizing on the momentum of the movement, pressured a wide range of actors to divest their resources from companies profiting from Israel’s occupation, from universities, to Norwegian pension funds, to multinational telecommunication companies. Ruiz contrasts the “bottom-up call for sanctions” with the U.S. government's “top-down form of sanctions.”

One irony of U.S. sanctions is that they fail to achieve even the (often imperialist) goals of the U.S. government. In Iraq, the U.S. government’s repeated affirmations that sanctions would not be lifted unless Saddam Hussein stepped down made clear that the goal was to trigger the disaffected masses to overthrow Hussein. This did not happen. Rather, many Iraqis saw their crisis as exacerbated by U.S. aggression: As an Iraqi Army officer told the New York Times, “Most people thought, 'Saddam is feeding us while the Americans are trying to starve us to death.''' Saddam Hussein played on this perception with a media campaign that broadcast and exaggerated the effects of the sanctions. At one point, Hussein instructed doctors to wait to bury individual children until there had been enough deaths to stage a mass funeral and generate outrage. The effectiveness of this campaign and the brutality of the sanctions led to long-lasting anti-American sentiment. Osama bin Laden’s 9/11 attacks were in part motivated by the sanctions. In the wake of President George H.W. Bush’s 2018 passing, bitter Iraqis, asked by journalists about his legacy, denounced “Mr. Embargo.”

The case of Iraq makes clear that the impoverished, hungry and sick victims of sanctions are not ideal candidates to overthrow their governments. Nor are they easily misled into blaming those governments for the effects of external sanctions. In the last month, Iranians and Cubans have taken to the streets in massive numbers to protest U.S. sanctions. In Venezuela, Juan Carlos Rosales knows whom to blame as well: “Ever since the executive decree, the situation here has been lethal.”

Regardless of their devastating results, the use of sanctions against “unruly” countries is a frequent U.S. foreign policy tactic, often posed as the only alternative to an invasion. The Trump administration has eagerly embraced this approach. On April 30, President Trump threatened to impose a “full and complete embargo” and the “highest-level sanctions” on Cuba for supporting Venezuelan President Nicolás Maduro. These threats were concurrent with an escalation of Iranian sanctions, first in the lifting of waivers that had previously allowed major buyers of Iranian oil to continue importing the product, then in the new round of sanctions on May 8 that targeted the export of the industrial metals that make up 10% of Iran’s export economy. These actions joined existing Trump administration sanctions against Iranian “individuals, entities, aircraft and vessels.”

History shows the consequences of these sanctions will not predominantly fall on the Iranian government, but on the Iranian people, who have suffered under U.S. sanctions since the 1979 Iranian Revolution. Although there has not yet been a comprehensive study of the toll of the Trump administration sanctions on Iran, Iranians report that their everyday lives have become more difficult, in the form of drug shortages, increased air pollution, job loss and long food lines. This most recent round of sanctions will only tighten the noose.

Trump’s talk of a potential “military option,” and his administration’s shockingly cavalier admission that the Venezuela sanctions are meant to “increase pain and suffering,” should rid us of any notion that the U.S. is imposing sanctions to “restore democracy” or “respect human rights,” as the Trump administration claims. Moving forward, we must see the use of deadly sanctions as mere cover for a march toward regime change—a ruse that will claim thousands of lives.

Gabe Levine-Drizin is a Chicago-based freelance journalist and can be followed at @gabepld.