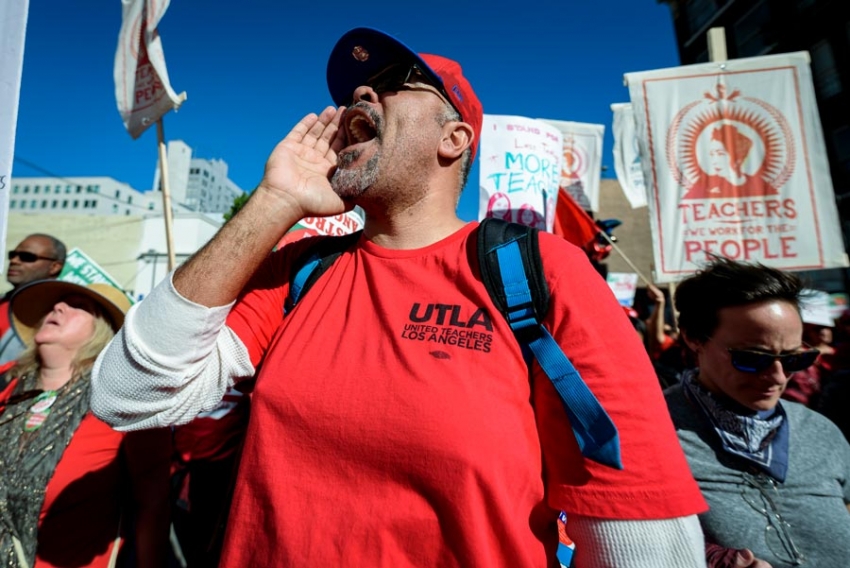 Want To Build the Labor Movement? Get a Job at a Union Workplace.

The case for the rank-and-file strategy.

Wins are less likely to be rolled back when a majority puts its own sweat into the process and stands ready to defend its gains.

Only workers themselves have the power to transform society, and workers must organize themselves to do so. Union staff and elected leadership can play important and sometimes pivotal roles, but in the fight against capital to win substantive, lasting gains, workers must be in the driver’s seat.

When workers are sidelined, at best we get staff-driven mobilizing, which Jane McAlevey describes as “dedicated activists who show up over and over … but [lack] the full mass of their coworkers or community behind them.” With an organized rank-and-file base, by contrast, ordinary workers themselves are the change agents, deeply involved in developing an analysis of what’s wrong in the workplace and a strategy for how to fight the boss (and, ultimately, capitalism). Their power comes from building majorities large enough to leverage militant action. Wins are less likely to be rolled back when a majority puts its own sweat into the process and stands ready to defend its gains.

The widespread teachers’ strikes of 2018 and 2019 and the Chicago Teachers Union strike of 2012 illuminate the potential power of worker-led organizing, as they were primarily led and initiated by rank-and-file union members.

This deep organizing, however, does not yet exist in most industries. To build it, unionists and labor movement activists can look to the “rank-and-file strategy” (RFS). The phrase was coined by Kim Moody in 2000 but takes inspiration from 20th-century labor upheavals like those led by the Minnesota Teamsters in the 1930s and black workers at a Chrysler assembly plant in Detroit in the 1970s, when radical unionists and socialists were at the heart of big gains.

What socialist rank-and-file activists such as Moody identified was a gulf between the Left and the organized working class, developed under McCarthyism. The class character of this gulf—with leftists more often in the middle class and disconnected from the day-to-day struggles of the working class—has weakened the Left and the labor movement.

When class conflict and labor struggles arise, as they inevitably do under capitalism, they can expose underlying capitalist ideology—an opportunity for people in these struggles to actively raise working-class consciousness. RFS proponents have sought to close the Left-labor gulf by building a layer of workplace organizers—including socialists joining the labor movement and respected workplace leaders of all political persuasions—to heighten class conflict and develop this consciousness.

Part of the answer to overcoming the inertia that ails the labor movement may lie in a new, young and energetic Left—which already shows signs of being closer to the broader working class than other recent generations of leftists. However, this Left remains largely divorced from the organized working class, where RFS suggests young leftists would best be able to exercise real power alongside coworkers. (While young workers are fast joining unions, 2017 data shows only 7.7% of workers between the ages 16 and 34 were union members.)

But radical unionists acting by themselves aren’t enough to win.

At the core of any success are rank-and-file leaders, the ones coworkers respect and come to for advice. What’s necessary is a mix, working in coordination: organic, workplace leaders—able to move coworkers and fellow union members to action—and socialists, who can bring a broader analysis and organizing experience, and who are sometimes workplace leaders themselves. This layer of activists and rank-and-file leaders is sometimes called the “militant minority.”

The militant minority organizes and wins campaigns around workplace issues to grow its ranks and raise class consciousness through these practical struggles, and it fights for the demands of the broader working class by creating an ever-larger group of worker-organizers with a shared vision of class-struggle unionism.

For alternate perspectives on the rank-and-file strategy, see “90% of Workers Aren't in a Union. Labor's Future Depends on Them.” and “Labor Needs To Embrace Social Justice Unionism.”

Laura Gabby is a carpenter in Local 157 and member of the Labor Branch of the New York City Democratic Socialists of America.