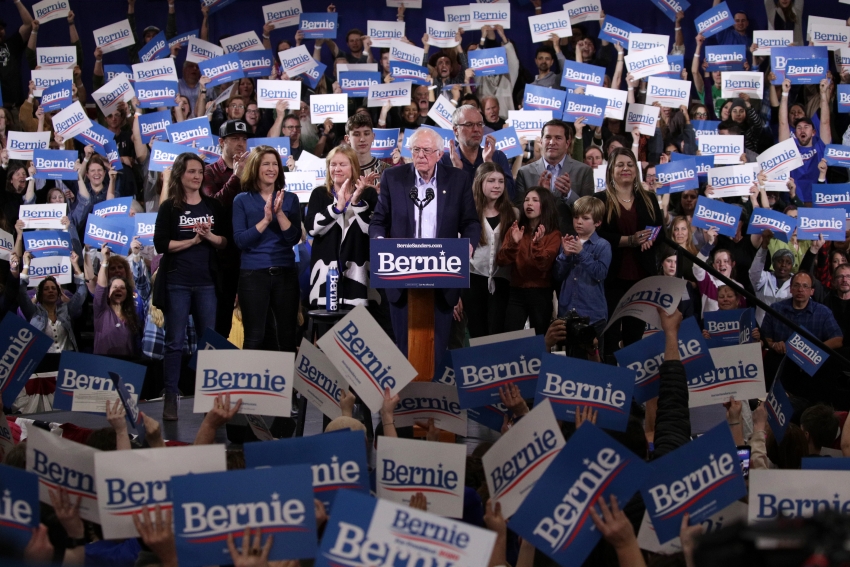 The Democratic Establishment Is Trying to Crush Bernie Sanders, But It Hasn’t Stopped Him

The race is now unmistakably one between Biden’s view of a world unchanged and Sanders’ vision for a future where human dignity and economic rights supplant corporate power.

It was never going to be easy. Transforming American politics to loosen the grip of corporate power and curb the influence of the super-rich has always represented a gargantuan task—one unlikely to be accomplished through a single election cycle. Monday’s centrist endorsement extravaganza, which saw the center of the Democratic Party throw its collective weight behind the candidacy of Joe Biden, was a reminder of just how arduous the road ahead endures for America’s nascent left-wing movement.

The results from Super Tuesday can’t be sugar-coated: Biden had a very good night, and currently holds 45 more delegates than Bernie Sanders. After the choreographed moderate consolidation, which saw Amy Klobuchar and Pete Buttigieg drop out to back Biden, followed by Beto O’Rourke’s endorsement of the last centrist standing, the dynamics of the race were upended. Whereas Sanders had been expected to benefit from sticky support, with other candidates splitting the centrist vote, Biden instead was able to pull voters from these other camps to put together surprise wins in states like Texas and Minnesota. Sanders’ performance wasn’t helped by lower than expected youth turnout. And after Mike Bloomberg’s Wednesday decision to drop out to endorse Biden, we should expect the middle lane to condense even more.

Still, Biden’s success shouldn’t be overstated. While the media has rushed to call him the “comeback kid,” the fact remains that the establishment’s choice was always going to have an upper hand in these elections—Biden’s campaign simply became the de facto vehicle for the party’s corporate wing after his blowout win in South Carolina on Saturday.

Even with everything falling in place for Biden, Sanders was still able to score a major victory in California, the most delegate-rich state in the nation and the crown jewel of Super Tuesday. Sanders won enough delegates in states across the country to keep him competitive in a still very close race, illustrating the strength of the democratic socialist’s insurgent campaign. With votes from California still coming in, Sanders could close the delegate gap even more. And he’s done it without taking money from billionaires while breaking fundraising records through grassroots donations and turning out levels of volunteers that put Biden’s campaign to shame.

At his Tuesday night speech, Sanders took on a positive tone. “Tonight I tell you with absolute confidence: We are going to win the Democratic nomination.” Sanders said, continuing, “We are going to defeat Trump because we are putting together an unprecedented, grassroots, multi-generational, multiracial movement. It is a movement which speaks to the working families of this country.”

Still, the speed of the convergence behind Biden was enough to jolt some in the Sanders camp, with campaign manager Faiz Shakir telling the New York Times, “It’s one thing to know it’s going to happen, and it’s another thing to watch it happen so very quickly.” As a result of the centrist love fest, the Biden campaign benefitted from a stream of positive news coverage on Tuesday morning, including front-page spreads in the Washington Post, Los Angeles Times and Dallas Morning News. Politico even hailed Biden’s “astounding comeback.”

The media was never going to be a neutral arbiter in this race. We’ve seen time and again that corporate outlets, including “liberal” MSNBC, routinely ignore or criticize Sanders disproportionately to other candidates. By focusing on shapeless questions of “electability,” pundits have found a way to portray Sanders as a threat to Democratic victory in 2020, even as his platform remains incredibly popular and he continues to rack up wins, buoyed by a fervent base of supporters.

But while commentators and Democratic operatives warn that Sanders’ democratic socialist label and redistributive agenda make him a uniquely vulnerable candidate, voters just don’t seem to mind. In fact, he is the most trusted on issues most important to Democratic voters, from healthcare to the economy. Not only is he the most broadly popular person in the race, as Peter Beinart writes at the Atlantic, “Sanders may be the least polarizing candidate in the presidential field.” And it’s not just progressive and liberal voters that like Sanders—self-described moderate or conservative Democrats also give him high marks.

But what about beating Trump? Even if Sanders and his program are popular, the electability argument goes, he just can’t defeat the incumbent Republican. On this issue too, the conventional wisdom of the anti-Bernie partisans is just plan wrong. As the New York Times reports, the evidence we have now shows that Sanders would win both the popular vote and an Electoral College victory over Trump. And in the all-important states of Wisconsin, Michigan and Pennsylvania, Sanders outperforms Trump.

So, if Sanders is popular and would likely beat Trump, the question remains why the establishment would pull out all the stops to blunt his momentum. It’s not just the Biden endorsements. Reports indicate that party officials who would vote as superdelegates on a second ballot at the Democratic convention are openly floating the possibility of denying Sanders the nomination even if he ends the race with the most votes and the most delegates, a prospect that led former Obama campaign manager David Plouffe to posit, “I’m not sure the party recovers from that for decades.”

Abandoning all pretenses of representing the democratic will of the people may appear a drastic move, but to fathom it we must understand what’s at stake for the political establishment.

On Monday, after Buttigieg and Klobuchar announced their support for Biden, stocks for top U.S. health insurers including Humana, UnitedHealth Group, Centene Corp. and Anthem rose to their highest level in five months. And following Biden’s performance on Tuesday, they shot up again, as did the Dow Jones Industrial Average.

Previously, stocks for the healthcare industry had tumbled following Sanders’ primary victories. Why? Because Medicare for All, the cornerstone of his campaign, would decommodify healthcare in the United States, removing the profit motive by providing care universally, and free of charge. As the Super Tuesday results prove yet again, this plan is incredibly popular—except among insurance executives who stand to lose their riches as a result of its implementation.

It’s not just healthcare. Fossil fuel companies would likely face massive to hits their bottom line as a result of Sanders’ Green New Deal plan to combat climate change. The private prison industry would almost certainly lose out in Sanders’ plan to stem mass incarceration and reform the criminal justice and immigration systems. Weapons manufacturers and other military contractors would likely see sales decline as a result of pulling out of forever wars, as Sanders promises. And of course, the super-rich, who hold colossal power over our economy and our politics, would be dispossessed of this authority. In short, the threat of a Sanders presidency to both the political and economic establishment is very real.

Biden, on the other hand, has famously promised that under his presidency, things will basically stay the same. At a Manhattan fundraiser in June 2019, Biden assured the wealthy donors in attendance that if he becomes president, “Nobody has to be punished. No one’s standard of living will change, nothing would fundamentally change.”

This is what a Biden presidency portends: nothing changing for the 162 billionaires who own the same amount of wealth as half of humanity. But the results from Tuesday don’t change the fact that Biden remains a weak and vulnerable candidate—just look at his dismal showing in Iowa. On the issues of Social Security, Medicare and the Iraq War especially, Biden has consistently been out of step with the base of the Democratic Party. And now, with the field winnowed, Sanders has the opportunity in the upcoming debates and on the campaign trail to train his attention on making the contrast between him and the former vice president as clear as day.

With Super Tuesday in the rearview, the race is now unmistakably one between Biden’s view of a world unchanged and Sanders’ vision for a future where human dignity and economic rights supplant corporate power. The establishment has made clear which side it’s chosen. With over 30 states still yet to vote, Sanders has made certain he plans to fight as hard as ever. His political revolution may have seen a setback, but it’s far from derailed. It wasn’t ever going to be easy. Changing the world never is.