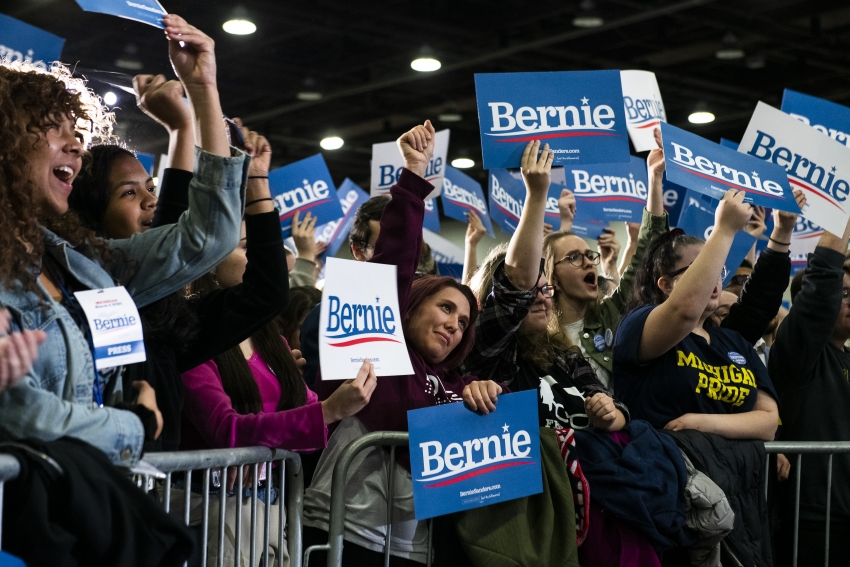 Despite His Losses, Bernie Sanders’ Agenda Is Winning

While Sanders lost in Michigan and other states, exit polls show voters want Medicare for All, an economic transformation and a nominee who will run on a progressive platform. Those demands aren’t going anywhere.

Sanders’ message of empowering the working class is gaining in popularity.

The outcome of Tuesday’s primaries narrows the path for Bernie Sanders to reach the Democratic nomination—of that there can be no doubt. While delegates are still being apportioned, Sanders’ inability to score a comeback win in Michigan—the state that reenergized his political revolution in 2016—comes as a major setback to his presidential campaign. Instead, Joe Biden has further solidified his position as the race’s frontrunner.

Sanders supporters can point to a number of factors that skewed the Michigan outcome in Biden’s favor, from long lines and hour-long waits at the polls in college-adjacent areas like East Lansing, Ann Arbor and Kalamazoo, to glowing media coverage of Biden following his victory in South Carolina, to the subsequent deluge of Biden endorsements from much of the Democratic establishment.

But while these issues surely played a role in Biden’s victory in the Great Lakes State (and deserve scrutiny), fixating on them alone can’t explain why Sanders wasn’t able to recreate the coalition that powered his upset win four years ago. After all, at that point in the 2016 race, Hillary Clinton was the party’s favorite to win the nomination, had the support of the media and political elite—and yet Sanders still won in Michigan.

There’s plenty of electoral analysis left to dig into when it comes to the Michigan results, but it appears that this time, Sanders was unable to capitalize on the strong support of non-college-educated white voters, and faced resistance from suburban women. That, along with Biden’s ability, yet again, to win the majority of black voters’ support, sealed Sanders’ defeat.

If the democratic socialist is to recapture momentum in the race and prevail in his challenge to the status quo, his campaign will need to adjust to these circumstances in order to widely broader his appeal, especially to black voters. One opportunity to do so will come in just a few days at the March 15 Democratic debate in Arizona. Rep. Jim Clyburn (D-S.C.) has called for such future debates to be canceled and for Biden to be anointed the nominee, while political consultant James Carville claimed on MSNBC Tuesday night that voters “want to shut this thing down.” Yet over 20 states still have yet to vote.

At that debate, Sanders will need to show not only that it’s him and not Biden who is the true champion of working people, and that he’s best positioned to defeat Donald Trump in November, but also that he’s best prepared to tackle a major nationwide crisis like the coronavirus—an issue that exit polls showed Biden winning on Tuesday. Voters will need to be convinced on all three of these fronts in order for Sanders to blunt what much of the commentariat has deemed “Joementum.”

But one thing Sanders doesn’t have to change is his platform, namely his signature issue: Medicare for All. In Michigan, a preliminary exit poll from CBS showed that 57% of Democratic primary voters favored implementing a single-payer healthcare system that would replace private insurance.

In Washington State, 64% of voters said they preferred single-payer and even in deep-red Mississippi, 62% were in favor. Those results track with exit polls from the 16 other voting states where the question had been asked, each of which showed more voters in favor of a guaranteed public healthcare system than opposed. A full 77% of Democratic and Democratic-leaning voters now say they support Medicare for All.

These results suggest that when it comes to healthcare—which Democrats consistently rank as their most important issue—the Left has largely won the debate. A majority of the party’s voters believe that healthcare should be a human right, guaranteed by the government free of cost to all people regardless of income or station in life. Such a development carries the promise of reorienting Democratic politics away from the market-based solutions that have been central to mainstream healthcare policy for decades, and finally moving instead toward a humane system premised on providing care rather than sucking up profits.

Yet these same voters also chose a candidate in Biden who not only isn’t running on Medicare for All, but actually suggested he may veto the policy as president even if it passed through a Democratic congress. How to make sense of such an apparent contradiction? Just look at exit polls from the states that voted on Tuesday in which voters said choosing someone who can beat Trump is more important than nominating a candidate who agrees with them on the issues.

Even here there is a tension, as polls consistently show Sanders would defeat Trump, both nationally and in swing states such as Michigan. Yet for the better part of the past year, the mainstream media has pushed Biden and his centrist politics as the “safe choice” while raising red flags about Sanders’ supposedly “radical” policies and his democratic socialist label.

To take just one example, at MSNBC, the most popular network among Democrats, former anchor Chris Matthews told viewers on February 3 that “Bernie Sanders is not going to be president of the United States, okay?”—comparing Sanders to failed 1972 candidate George McGovern and ringing alarm bells about socialism. Such a comment wasn’t an outlier, but rather has colored much of the network’s coverage. In the face of such warnings, in Michigan, 82% of Democratic voters said Biden could unseat Trump, compared to 63% for Sanders.

Such a margin illustrates the prodigious challenge facing Sanders this cycle. He has few allies in either the media or political classes to make his case for him, and he’s largely framed his campaign as a direct challenge to the elites at all levels of society. That posture has allowed him to power his insurgent run through donations from working-class Americans and a massive volunteer operation. But the United States is a vast country where establishment politicians and pundits still hold immense sway over the electorate. Convincing Democratic voters that he was the more electable candidate than the establishment’s choice—who also happened to serve as vice president to the still very popular Barack Obama—was always going to be an uphill battle.

Still, Biden isn’t yet even halfway to the delegate count needed to win the nomination. While Sanders’ chances have been greatly diminished, the race isn’t over, regardless of what the punditry would have you believe. And Sanders’ message of empowering the working class is gaining in popularity.

According to early exit polls, in Michigan, 49% of Democratic voters said they favor a “complete overhaul” of the country’s economic system, compared to 39% who think it needs minor changes. In California, Texas, Tennessee and North Carolina—states where the question was asked—a plurality of voters held favorable opinions of socialism. And overall, a clear majority of Democratic primary voters now think the party’s nominee should run on a more progressive agenda than President Obama, while just 46% want a nominee who will “return the country to the way it was before Trump took office.”

Throughout his run, Sanders has railed against an economic system that leaves millions of working people behind while the super-rich gobble up more and more of the gains, leading to barbarous levels of income and wealth inequality. He’s pointed to not just the billionaire class but also its allies in the halls of corporate power and media industry as barriers to upending this unequal status quo. And he’s made an unequivocal case for enacting sweeping progressive measures to tip the balance toward the working class. Clearly, voters have paid attention.

Voter behavior is complex and does not always fall easily on a Left vs. Right spectrum. But one thing is clear from the 2020 primaries: Democrats want real change that will improve their lives, and are ungratified with the current state of affairs. Nowhere is that clearer than with younger voters, who in state after state have overwhelmingly chosen Sanders as their preferred candidate. In Michigan, voters under 45 went 64%-32% for Sanders, whereas those over 45 went 66%-25% for Biden—a stunning spread.

Biden famously said in 2018 that he has “no empathy” for millennials who speak out against skyrocketing debt and the lack of job opportunities. But it is these younger voters who will inherit not just the planet that’s seeing its climate ravaged by fossil fuel emissions, but also the very Democratic Party that Biden is aiming to lead.

No matter what happens during the rest of the primary campaign, the results from Michigan and other states show that Democrats want policies such as Medicare for All that will take basic services like healthcare off of the marketplace and instead guarantee them as rights. Whoever becomes the nominee will face a growing movement that is mobilized, motivated and determined to win.