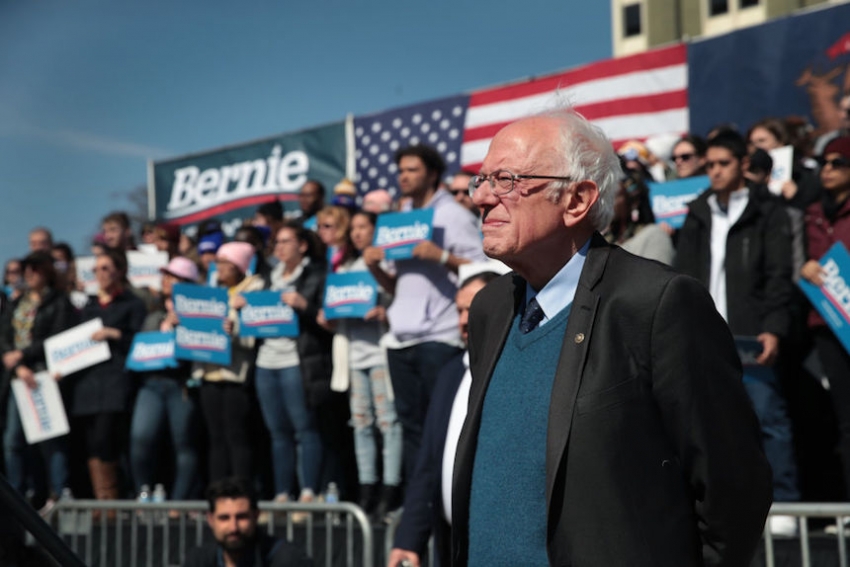 The campaign is over, but the movement continues. (Photo by Scott Olson/Getty Images)

The Future Belongs to the Movement Sparked by Bernie Sanders

Sanders may be out of the race, but by advancing a bold left agenda and putting capitalism on trial, he ignited a movement that will redefine American politics.

Sanders’ run never fit the mold of a conventional campaign. It was an insurgency against the political and corporate establishment—a movement rather than a wholly electoral effort.

For supporters of Bernie Sanders and the movement he galvanized, this is a difficult day. What once appeared firmly within our grasp is no more. That reality is all the more sad in that it comes as Americans are dying by the thousands in a pandemic. Isolated, we are unable to meaningfully participate in the civic life of our nation due to concerns for our safety.

Sanders’ decision to leave the race is a loss for the progressive movement. His continued presence on the national stage has been instrumental in bringing left-wing ideas into the mainstream of American politics. By dropping out, he will no longer be able to command the coverage and attention he’s received for years as a presidential candidate.

All of this is true, but it also illustrates just how much Sanders’ run never fit the mold of a conventional campaign. Instead, the endeavor was molded early on as an insurgency against the political and corporate establishment: in short, a movement rather than a wholly electoral effort.

That decision, made largely by Sanders and his inner circle, came with drawbacks, from hampering his ability to win support from influential figures in the Democratic Party to frayed relationships with mainstream media outlets and an “us against everybody” mentality that permeated much of the campaign.

More formidable issues that any future left campaign will have to overcome include the inability of Sanders to win support from older African-American voters, and “electability” concerns that—while fanned by a hostile press—helped to sink the chances of building a winning coalition.

A sea of post-mortems to come will surely detail these and other issues that led to Sanders’ exit. But such critiques alone will never tell the entire story of what, in 2016 and in 2020, the independent, democratic socialist and his scores of supporters were able to accomplish.

While the primary goal of any electoral campaign is to win and take power, political projects—and the movements they fuel—have more multifarious ends. There can be no doubt that both Sanders campaigns raised the consciousness of millions, connecting their daily struggles to the larger power structures in America that concentrate wealth and power at the top while squeezing the working class.

Throughout the campaign, Sanders and his team amplified the voices of the most vulnerable and marginalized in our society and asked us not just to understand their pain, but to see our futures as bound up with theirs. It was a plea for solidarity that, while offbeat as an electoral strategy, helped bring a new lens to how we view our politics.

Sanders consistently called out the destructive role that corporations and the super-rich wield over our lives and our democracy. The campaign made sure Americans understand not just how broken our systems are, but what entities are responsible for that fracturing—and who is profiting off of it. While the Democratic establishment singled out Donald Trump as a singular perversion of American politics, Sanders always made clear that his movement was seeking not simply to topple the current president, but also the debased system that gave rise to him in the first place.

And it isn’t simply a collection of bad actors operating off of personal greed that’s culpable for our indefensible status quo—Sanders has held firm that it’s a system and it has a name: capitalism. For the first time in modern U.S. political history, a viable candidate for president put our profit-driven economic system on trial. And by so doing, he compelled us to see each of our political conflicts as part of a larger struggle being waged between the working class and the capitalists, i.e. “the crooks on Wall Street,” “the insurance and pharmaceutical companies,” and “the billionaires.”

To counter these powerful forces, Sanders called for a different way of organizing our economic and political lives. By refusing to disavow the label of democratic socialist—despite the worry expressed by political strategists—he helped popularize the concept among a new generation of young people who now view socialism more positively than capitalism. They’re also flooding organizations like the Democratic Socialists of America which fight for the policies pushed by Sanders—and will persist long after the campaign.

But the most consequential impacts of Sanders’ run in the short term will likely be how he brought bold, redistributive policies to the fore of our political mainstream. Medicare for All is now far more than a broadly popular proposal, it’s a benchmark for candidates to show whether they believe healthcare is a human right. As COVID-19 wreaks havoc on the population and stretches thin an already feeble market-based healthcare system, the wisdom of a universal, free and publicly-operated alternative is becoming clearer by the day. Just look at polls showing the idea gaining in popularity in the past month.

The same goes for Sanders’ other signature policies, from a $15 an hour minimum wage to free public college, massive tax increases on the rich, expanded labor rights and a Green New Deal. These ideas are increasingly becoming the standard for progressive candidates, and enjoy mass support from the general public. What’s more, a number of states and municipalities across the country are now working to implement them in various ways.

Bernie Sanders did not invent these ideas—they were born of demands from social movements. His campaign simply served as a vehicle to push them forward. And there can be no doubt he accomplished that feat. Just look at the debate throughout the 2020 Democratic primary, which was shaped to its core by Sanders’ left-wing agenda.

The axial proposition binding these policies together has always been a belief that economic rights should be considered human rights. Healthcare, education, housing, a living wage, and access to food and a clean environment: These are elements of a dignified life in the 21st century, and should be guaranteed to every human being. This framework will continue to animate progressive politics for years to come. We may well look back on the Sanders campaign as the tinder that sparked a turning point, leading us to question, oppose—and, hopefully, overcome—the forces of market fundamentalism that dominate our politics and economy.

Bernie Sanders will not become the next president, and as a supporter of his, I believe the country will be worse off for it. But his campaign provided an opening for the American Left that hadn’t been seen in decades. Far from turning to a revanchist position, we must now take full advantage of this opportunity and push harder than ever for the vision we all saw represented by the Sanders campaign.

We are in a state of crisis. The vehicle for our movement has been derailed. Mourning is understandable. But continuing the fight is the only way forward.

Views expressed are those of the writer. As a 501(c)3 nonprofit, In These Times does not support or oppose any candidate for public office. The author is a member of the Democratic Socialists of America.