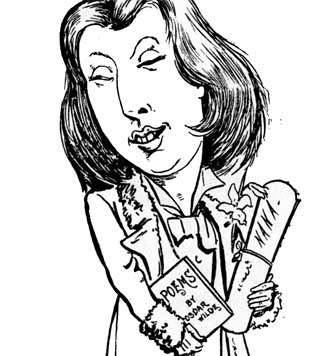 When first published in England two years ago, Neil McKenna’s The Secret Life of Oscar Wilde won universal critical acclaim. The praise was more than deserved, for this stunning piece of investigative historiography reveals for the very first time how Wilde was a militant precursor of the modern gay liberation movement long before his famous speech from the dock in defense of “the love that dare not speak its name.”

Making use of hitherto unpublished and unconsulted documents, diaries and letters, this extraordinary book–just published in the United States–also gives a new and revealing portrait of Wilde’s sexuality that supercedes all previous Wilde biographies. Moreover, McKenna’s book gives us, at long last, a definitive account of the political cover-up of the homosexual scandals within England’s ruling and royal elites that motored Wilde’s prosecution and trial.

The commonly accepted view is that Wilde discovered his homosexuality after he had already been married and produced children, when he was seduced by his young friend Robbie Ross. It is this version popularized in Brian Gilbert’s sympathetic 1997 film, the Oscar-nominated Wilde (starring the openly gay British actor Stephen Fry, in a subtle portrayal, as Wilde). The film was based on Richard Ellmann’s admiring, Pulitzer Prize-winning biography–valuable, but now made outdated in many ways by McKenna’s book.

In his carefully documented work, McKenna demonstrates beyond doubt that the truth is quite different. By the time he married in 1884, Wilde had already lived for several years with a male lover he’d met in 1876–the society portrait painter Frank Miles. A handsome man two years older, Miles in turn would introduce Wilde to the sculptor Lord Ronald Gower, “a notorious sodomite, with a penchant for ‘rough trade,’” on whom Wilde “would base the character of Lord Henry Wotton, the corrupting prophet of strange sins” in The Picture of Dorian Gray.

Wilde later recounted the day of what he called his “sexual awakening” to his friend and confidant Frank Harris (1856-1931). A writer, editor, journalist and womanizer, Harris authored My Life and Loves, a monumental autobiographical portrayal of the underside of Victorian sexuality that created a scandal in both Europe and America when published in the ’20s.

On the day 16-year-old Wilde left Portora Royal School, where he’d been a student, a boy a year younger than he–with whom he’d had a strong “sentimental friendship”–came to the train station to bid him farewell. In McKenna’s re-telling, as the Dublin train was about to depart, the boy turned and cried out, “Oh, Oscar!” “Before I knew what he was doing he had caught my face in his hands, and kissed me on the lips. The next moment … he was gone.” Wilde felt “cold sticky drops” trickling down his face–they were the boy’s tears. “This is love,” he said to himself, trembling slightly. “For a long while I sat, unable to think, all shaken with wonder and remorse,” Wilde told Harris. That sense of “wonder and remorse” followed Wilde to Oxford, where he began his affair with Miles and, as a scholar of classical Greek, first began to write admiringly of “Greek love,” the passion of an older man for a younger.

By the late 1870s, Wilde was already preoccupied with the philosophy of same-sex love. He befriended and frequented the poet and writer John Addington Symonds, who helped found several “Walt Whitman Societies” in the north of England–the first recorded English groups of gay men founded explicitly to discuss same-sex love–and who wrote the pro-homosexual “A Problem in Greek Ethics,” published in 1883. He began a cautious friendship with the homosexual essayist and critic Walter Pater–the central figure of the Pre-Raphaelites, who had written in coded language of the love of boys–but found him “too hesitant, too secretive about his sexual tastes.”

During this period Wilde also became familiar with the writings of the gay liberationist pioneer, the German lawyer Karl Heinrich Ulrichs (1825-1895). From the 1860s on, Ulrichs published dozens of books and pamphlets proclaiming that homosexuality–which, invoking Plato’s Symposium, he baptized “Uranian love” (from the Greek urianos, or “heavenly love”)–was normal and natural, and arguing that Uranians should have full social and legal equality with heterosexuals, including the right to marry. Wilde embraced both Ulrichs’ philosophy and his Uranian language. He and his friends began to refer in their letters to the campaign for legalization of homosexuality as “the Cause,” joining a secret Uranian organization, the Order of Chaeronea, to fight for it. McKenna demonstrates that “the very title of The Importance of Being Earnest is a Uranian pun. … Among less literary Uranians, ‘earnest’–a corruption of the French uraniste–enjoyed a short vogue as a coded signifier of Uranian inclinations”–as in “is he earnest?” to mean “is he gay?”

When Wilde sailed for America on Christmas Eve, 1881, one of his most important priorities was a meeting with Walt Whitman. Wilde’s friend Symonds had engaged in a long correspondence with Whitman, trying to draw out an explicit declaration of his sexual tastes, so ill-concealed in Whitman’s strongly and beautifully homosensual poems about passionate male bonding. Whitman had remained evasive. But after his meeting with Whitman (then in his 60s, with a flowing, white beard), Wilde wrote that there was “no doubt” about the great American poet’s sexual orientation–“I have the kiss of Walt Whitman still on my lips,” he boasted.

In 1889–six years before the trial that sent him to Reading Gaol–Wilde startled the literary world with The Portrait of Mr. W.H. This roman à clef drew its title from the “W.H.” to whom Shakespeare dedicated a sequence of 154 sonnets. Adopting as his own the well-known theory that “W.H.” referred to the 17-year-old Elizabethan actor Willie Hughes, McKenna writes, Wilde made his novel’s “real hero…the spiritual and sexual love that men have for younger men…[It was] a manifesto…closely argued to give cultural and historical legitimacy to sex between men and youths…Just as Shakespeare had one great life-affirming, life-changing, immortal love affair with a beautiful boy, so [Wilde’s searching] for an ennobling love, for an inspiring love, for a love that could transcend the mundane and enter the sphere of immortality, began at about the time he was writing The Portrait of Mr. W.H.”

That love, of course, was to be Lord Alfred Douglas–Wilde’s “Bosie.” But Bosie was not the only homosexual son of the half-mad, anti-Semitic, alcoholic Marquis of Queensberry. Bosie’s beloved older brother, Francis, Viscount Drumlanrig, was also a Uranian. What’s more, in 1892, not long after Bosie’s love affair with Wilde had begun, Drumlanrig had become the lover of Lord Rosebery, the Liberal Party politician who had been Prime Minister Gladstone’s foreign secretary before becoming prime minister himself in 1894.

Rosebery had arranged for his lover Drumlanrig to be given a peerage in 1893, so that he could sit in the House of Lords and assume a junior ministerial role. But the Marquis of Queensberry–whose right to sit in the Lords had been lost (and thus, his political career thwarted) when, as a Scots Peer, he’d refused to swear the oath of allegiance to Queen Victoria–took the gift of a peerage to his older son as a deliberate insult. He developed a white-hot anger at Rosebery and the Liberal Party elite. This anger became uncontrollable rage when Drumlanrig committed suicide the year before Wilde’s trials to save his lover Lord Rosebery from exposure.

It’s well known that Wilde–under pressure from his beloved Bosie–decided to sue Bosie’s father for libel for having called him a “sodomite.” But what has never been so tellingly and completely detailed until this book is how Queensberry pressured Rosebery’s liberal government into subsequently prosecuting Wilde criminally–through blackmail. McKenna’s chapters dealing with Queensberry’s blackmail of the government read like a detective story. He details how the government’s relentless prosecution of Wilde, which included the bribing of witnesses–all designed to “bring to an abrupt halt what many saw as the creeping contagion of his gospel of unnatural love”–was “driven entirely” by the fear that Queensberry would make public the secret homosexuality of Prime Minister Rosebery, and of other members of the Liberal Party leadership and the Royal Family.

McKenna does a fine job of portraying the class elements of Wilde’s persecution. Since the Victorians believed there was no such thing as working-class homosexuality, but that the lower classes were “corrupted” by decadent members of the elite, Wilde’s flings with a raft of boys not of his own class were considered doubly scandalous. But if there is one criticism to be made of this book, it is that it makes short shrift of Wilde’s politics. “I think I am rather more than a Socialist. I am something of an Anarchist, I believe,” Wilde said, and his portrayal of the poverty produced by industrial society in his book, The Soul of Man Under Socialism, is still touching today. But his non-gay political activism–for example, Wilde signed a petition for the release of the Haymarket martyrs, the anarchist American trade unionists executed for their role in the 8-hour day movement–goes unmentioned in this book.

Despite that caveat, The Secret Life of Oscar Wilde must now rank as a crucial, hitherto missing, but terribly vital piece of both gay and literary history–and it is beautifully written to boot. It is both a major achievement and a wonderful read.

Doug Ireland can be reached through his blog, DIRELAND, at http://direland.typepad.com/direland/