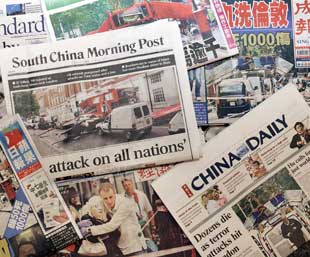 China’s Communists take pride in turning established ideas on their heads. Their latest success has been in toppling the notion that free markets create free societies.

Though China is the fastest growing economy in the world, censorship and limits on freedom of expression are on the increase as the government struggles to contain growing unrest across the country.

New regulations issued by China’s State Council in late July prevent theater companies and artists from performing works that “oppose the basic principles of the constitution that place the Communist Party as the ruling party.”

According to the new rules, commercial performances should also refrain from performances that “are deemed harmful to the state … endanger state unity, sovereignty or territorial integrity, [or] endanger state security or the honor or interests of the state,” reported the official newspaper of China’s Communist Party, The People’s Daily.

Foreign entertainment enterprises have been barred from running song, dance or theater groups, and local visits by foreign performers will require collaboration with Chinese partners. In June, the government reversed a rule that allowed local media firms to enter into partnerships with overseas media firms and tightened controls on foreign media companies operating in China.

The moves come in the wake of rising social and political unrest, which senior leaders here see as a threat to their control and national stability.

In recent months, hundreds of riots by groups as diverse as retirees demanding withheld pensions, farmers protesting land seizures, citizens incensed by government corruption and ethnic minorities inflamed by prejudice have rocked different parts of China. The worst trouble came on June 16, when thugs in Shenyou, about 50 miles from Beijing, attacked locals resisting a forced buyout of their land, killing six people and injuring about 50.

Authorities had tried to censor news of the unrest by sealing off the affected areas and detaining journalists trying to cover the situation. But with 100 million people in China now connected to the Internet and more than 330 million owning cell phones, news of the violence spread quickly across the country.

In response, existing controls on the Internet, such as intrusive monitoring of chat rooms by human censors and advanced filtering techniques developed with help from U.S. corporations such as Cisco, are being stepped up, especially during sensitive times. The government is so blasé about the censorship that it uses state-controlled media to spread word of it.

The Ministry of Public Security has also announced plans to roll out a software program developed by Venus Information Technology, a local company, that will monitor cell phone text messages. Plans to create a network of 100 satellites capable of monitoring every inch of Chinese territory by 2020 are also in place. In addition to monitoring the environment and urban growth, the network would monitor “various activities of society,” Shao Liqin, an official in the ministry of science and technology, recently said.

China is also “more successful than any other country” in censoring the Web, according to a recent report by Harvard Law School’s Berkman Center for Internet and Society.

More than 250,000 Web sites–including those of major Western media and non-governmental organizations–cannot be accessed. An estimated 30,000 human monitors scan e-mail, Google searches, and chat sites such as MSN and Yahoo, and troll online groups and blogs to find offending information. Individuals identified for “seditious” online activity are often arrested, as was the case with Zhang Shengqi, a 23-year-old student arrested for publicly supporting the Roman Catholic Church, which is banned in China.

The traditional press fares little better. Local journalists who report on topics that meet “with the Government’s or local authorities’ disapproval suffer harassment, detention and imprisonment,” says Susan W. O’Sullivan, senior advisor for Asia in the U.S. State Department’s Bureau of Democracy, Human Rights and Labor. As a result, China has the highest number of imprisoned journalists in the world–at least 42, according to the New York-based Committee for the Protection of Journalists. Last year, Yu Huafeng and Li Minying, editors at the Guangdong Province’s Southern Metropolitan Daily newspaper, which had published a series of critical articles about the local government’s management of SARS, were sentenced to 12 years in jail on flimsy corruption charges.

The jitters sent through the government by recent protests are leading to the implementation of even more intrusive and innovative censorship and control tools. The vigor with which these have been implemented has surprised even some of the Communist Party’s harshest critics.

“It’s like going back to 1989,” says a survivor from the massacre that took place at Tiananmen Square that year. (He asked that his identity remain shielded.) “I didn’t expect it.”

Among the Chinese journalists arrested over the last year were well-known personalities such as Chen Min, chief editorial writer at China Reform magazine, who wrote under the pseudonym Xiao Shu, and Shi Tao, a journalist with Contemporary Trade News.

Their crimes were relatively mild. Xiao riled authorities with his essay “The Most Disgusting Day,” which criticized the government’s detention of Ding Zilin, an activist with the Tiananmen Square Mothers group whose 17-year-old son was killed in the 1989 massacre. Many domestic journalists say they are now being warned against writing even relatively innocuous stories, such as on China’s recent revaluation of its currency.

Significantly, pressure on foreign journalists, who were hitherto treated with kid gloves, is also rising. In September 2004, Zhao Yan, a research assistant for the New York Times, was arrested and charged with revealing state secrets, which carries a maximum sentence of death if he is convicted. Younger correspondents here now joke that getting detained is a sure way of earning distinction. Local assistants and translators who work with international journalists are also being called in for “debriefings” by local security services.

However, some of China’s new media-control plans are focusing more on shaping opinion rather than controlling it. One such plan calls for government operatives to infiltrate Internet chat groups where criticism of the government is rising and improve the Communist Party’s image by posting pro-government propaganda, reported Southern Weekend, a newspaper based in southern Guangzhou province.

The plan has already been operational in Suqian city in the eastern province of Jiangsu since April. The infiltrators are government officials who have been carefully selected by Suqian city’s official propaganda department on the basis of their “understanding of official policies, knowledge of [political] theories and political reliability,” the weekly said.

“We will guide public opinion as ordinary netizens,” Ma Zhichun, one of the recruited commentators, was quoted as saying.

And while China’s earlier political reforms gave people significant personal freedoms and mostly left only political controls in place, now even that is changing.

“Change threatens,” she says. “Today, there are rules of the game in place to order society. When someone like me breaks these rules [and] advocates new ones, it’s seen as dangerous. I am seen to have betrayed my own society when in fact I feel like I am helping it.”

Chu Tian, a journalist associated with Southern Weekend who was made to leave the publication under official pressure, says that like many other journalists and activists he’s learned to couch his words and use allegory or metaphors when writing about controversial issues. “It’s like getting the ping-pong ball to just nick the table. You get to make the point, but barely,” he says. “Luckily, readers have learnt how to decode what we say, to read our real feelings.”