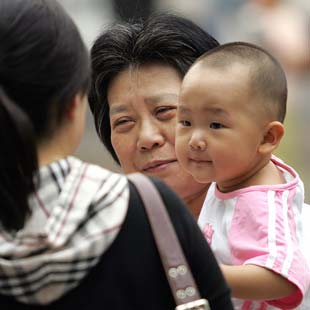 It was difficult for Chen Guangcheng to come to Beijing The blind social activist from Linyi, in China’s eastern Shandong province, needed a friend to hold his hand and help him navigate China’s overcrowded bus and train systems as he made the six-hour trip to the nation’s capital.

But the journey back was even harder. Within days of arriving in Beijing, on September 6, Chen, 34, was ambushed on the street by plainclothes security officers from Shandong, who bundled him into a car and took him back to Linyi. There, Chen found himself under de facto house arrest, where he still remains. No charges have been filed against him and Shandong officials did not respond to requests to clarify Chen’s status.

“It was like a kidnapping,” says Jiang Tianyong, 34, a Beijing-based lawyer who is part of the legal team representing Chen pro bono. “We knew he was abducted by Shandong officials even though they have no jurisdiction in Beijing because some people recognized the officials among the men who attacked Chen. They wanted him out of Beijing, but mainly they just wanted to punish him.”

Chen’s immediate crime took place during his stay in Beijing, when he complained bitterly to sympathetic central government officials, journalists and other activists about what he called a “bizarre” local government program in Shandong that was enforcing China’s one-child policy by illegally forcing pregnant women to have abortions.

“It is a crazy and merciless situation,” Chen told In These Times, just days before he was abducted. “Recently no one was really enforcing the one-child policy. But as the population in Shandong has ballooned, I think the provincial government put pressure on local family planning departments that have just gone nuts.”

Chen said more than 120,000 people in Shandong alone have been forced to undergo forced abortions and sterilizations over the past few months. Though China’s National Population and Family Planning Commission has said this figure is exaggerated, in a rare admission, the commission’s spokesperson, Yu Xuejun, admitted that “some persons concerned in a few counties and townships of Linyi did commit practices that violated the law.”

“The responsible persons have been removed from their posts,” Yu added, without giving any specific details.

Zhu Hong Ying, 40, and her husband, Xia Jian Dong, 40, are farmers in Zhai Tian Zhuang village near Linyi. The couple, who already have one son, say they first heard of the forced abortions in March, when Zhu was five months pregnant.

“We panicked and ran into (Linyi) to hide,” Zhu said during an interview that had to be conducted on the telephone as local police had sealed off her area in the wake of Chen’s detention. “But to get to us, about a month after we left, they arrested three of my sisters-in-law. So we felt very guilty and went home.”

Zhu says what happened next went beyond her deepest fears.

“The people from the family planning department were waiting for us. They demanded RMB700 (about $90, two months wages for Zhu) to release my sisters-in-law and then they pushed me into a van and took me to a local family planning clinic.”

According to Zhu, a group of eight people surrounded her and harangued her to have an abortion.

What they were doing was illegal, as Chinese law stipulates that only financial penalties can be levied against parents who break China’s 25-year-old one-child policy. The policy, though harsh, is aimed to stabilize China’s population of 1.3 billion at around 1.6 billion by 2050. Under the policy, Chinese families can have only one child, except ethnic minorities, who can have three children, and farmers, who can have two children if their first child is a daughter.

But Zhu says there was no way for her to protest.

“I just kept sobbing and begging but no one listened,” she says. “Finally I was so weak I just said ‘yes.’ Then a doctor came in and gave me an injection in the stomach. After I took the shot, the whole day I didn’t feel anything. The second day, in the early morning, blood and water all flowed out of me. Then the baby came out, but it was dead. It was a boy.”

Zhu says gazing at her dead son was the most heartbreaking moment of her life. But there was no time to dwell on her emotions.

Xia says a nurse came into the room and dumped their baby’s corpse into a black plastic bag, along with all the other discharge.

“She told me to go throw it into a truck which had a large container kind of thing at the back,” says Xia, his voice quavering over the line. “When I opened the door and looked in, it was full of black bags and blood.”

The couple was sent home hours later. But in a bizarre twist, local authorities returned to arrest Zhu just a week later, this time because another of her sister-in-laws who was also pregnant with a second child had gone into hiding. Though Zhu was still frail from the abortion, she said authorities held her “as ransom for five terrible days.” Then, after her sister-in-law was found and aborted at five months, Zhu was fined RMB 150, (about $19) and released.

Similar reports have been filtering out of various provinces in China for the last few months and “are the surest sign that law is dead in China,” says Gao Zhi Zheng, an activist lawyer in Beijing.

“One of my clients is an unmarried woman from [a central Henan province] who was aborted at seven months because it seems the authorities took it upon themselves to decide a single woman had no right to have a baby,” Gao said, as he spread pictures his client and her partner had taken of their aborted fetus across his table. “Look at this, is this abortion or murder?”

A former employee in the Linyi family planning department, who asked that he be identified by only as Cao, says such cruel measures are usually carried out by “overzealous” local officials.

“They’re looking to fulfill quotas [of women prevented from having a second child] or simply trying to contain birthrates in their regions after being berated for allowing them to increase by senior officials,” Cao says.

And almost always, other local officials collude in covering up the incidents, which are illegal under Chinese law, Jiang says.

That’s why even when concerned central government officials in Beijing finally sent an investigative team into Shandong earlier this month, “local officials stopped us and other affected people from meeting with them and prevented (the team) from coming to our village,” Xia says. And even after the National Population and Family Planning Commission’s admission of wrongdoing and sacking of Shandong’s errant family planning workers, local authorities continue to hold Chen and harass affected people.

The incidents reveal just how tenuous Beijing’s hold on powerful local authorities and officials is becoming. But more importantly, says Gao, “the deep and abiding wounds the gory abortions and other similar crimes committed by local authorities have created in local communities are beginning to fester and could prove dangerous to China’s stability.”

About 74,000 public protests rocked China last year, up about 50 percent from two years ago, and much of the unrest was caused by ire over corrupt and hard-nosed local officials, according to the Ministry of Public Security.

Xia says that until what happened to him and his family, he thought of himself as a model citizen.

“But now I’m speaking out!” he says. “Leaders here have tried to intimidate us from trying to pursue our case. They’ve said we’ll give you some compensation and all that, but what they’ve done is arrest those trying to represents us, like Chen. So we will continue our fight.”