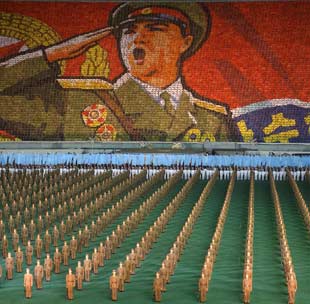 North Korean troops perform during the Arirang festival at the 150,000-capacity May Day stadium in Pyongyang on October 6, 2005.

The illusion of success on which this secretive nation’s leaders thrive was on full display in early October as the Korean Workers Party celebrated the 60th anniversary of its ascent to power.

Parks and skyscrapers in the country’s showcase city were newly spruced up to valiantly demonstrate how the might and success of the unique brand of Communism practiced by the “hermit kingdom” is still intact.

A song-and-dance extravaganza called “Arirang” was the centerpiece of the festivities. A cast of 100,000 acrobats, dancers, singers, soldiers, musicians and children who made giant designs using colored cards enthralled the audience as they told a love story with predictable ingredients–boy meets girl and, separated by political turmoil, they fight for their country, defeat the United States and go on to build a warm cozy life in the dazzling new Korea created by Kim Il Sung.

As a group of sopranos sang a paean to Korean identity out on the field, Ryong Chol Li, one of the three government escorts accompanying me and three other American journalists on a restricted government-orchestrated tour, seemed genuinely moved. “It shows how our people are united around the Workers Party of Korea with one mind, single-hearted,” he said.

But the decay and despair gripping this isolated country of 23 million could not be entirely stage-managed away. After the show, as our minders hustled us away from curious locals, most lights were out in Pyongyang.

After the glitz of Beijing, our departure city, Pyongyang looks drab and derelict. Rows of concrete buildings lining the streets seem empty, and while smartly uniformed “traffic girls” direct the traffic with crisp, military-like motions, there are almost no cars on the streets. Most people walk, and some push friends or older family members around in makeshift carts. Giant, smoking chimneys add to the sense of industrial decay that drapes the landscape. The only things gleaming here are the AK-47 rifles slung over the shoulders of soldiers in khaki, who are everywhere.

The next morning, we drove the bumpy road to the Demilitarized Zone (DMZ) that separates North Korea from South Korea and is often called one of the most dangerous places on earth. Peasants in ragged clothes combed recently reaped rice fields for leftover grains. The legacy of the famine and series of natural disasters that killed about 3 million people and rocked this isolated country in the mid-to-late 1990s, when it was already debilitated by the fall of the Soviet Union, is still alive here.

But Pyongyang appears to be making the dangerous mistake of believing its own illusions. The North Korean government recently informed the 25-odd international NGOs it invited into the country in 1995 to help cope with the famine that they will have to close shop by the end of this year.

Gerald Bourke, a public affairs officer with the World Food Program’s (WFP) North Korean operations, says that would be a disaster.

“We very much feel the need to stay,” Bourke says. “We feed about 6.5 million here; if WFP were not there to provide supplementary foods to children and pregnant and nursing women, it could be very serious.”

Dr. Eigil Sorenson, head of the World Health Organization’s office in North Korea, says though his organization will not be “directly affected,” the expulsion of other NGOs could hurt supplies of essential medicines, which “would have a possibly subversive effect on the population.”

A foreign resident in Pyongyang who requested anonymity said one of the main reasons behind the government’s decision is that it does not like “hundreds of foreigners running around the country asking questions and monitoring government activities. It fears this will ‘contaminate’ the country and people.”

Since North Korea’s creation in 1945, its “Great Leader” Kim Il Sung, and his son, Kim Jong Il (known as Dear Leader) have advanced a cult-like ideology of self-reliance called Juche, or “Kim Il Sung-ism.” This philosophy is so fixated on the idea of self-sufficiency that it even has its own calendar, which uses 1912, the year Kim Il Sung was born, as its base year.

The importance authorities attach to maintaining the illusion of Juche power was underlined by the manner in which our embarrassed minders didn’t allow us to talk to the people scavenging in the fields or to photograph the scene. Their explanation: Pictures would only make “the world think all North Koreans are hungry and that there is famine in the country, ” which, of course, they insisted, there isn’t.

“In fact, we’re having a bumper crop this year,” said Mr. Jiang, a minder from the foreign ministry.

As we drove around, Jiang pointed to groups of city school children and office workers who had been drafted by the government to work alongside local farmers in the fields for up to two weeks during the harvesting season.

“This is how we work–as a single society, a single unit with everyone dedicated to the national cause,” said Jiang.

But later, as Jiang and the other minders relaxed, they confessed that North Korea is indeed facing hard times–even if they were quick to translate this into a defense for Pyongyang’s desire to produce nuclear energy.

“We have no power, so nothing can run. That’s why we need the light water reactors,” said Jiang, referring to North Korea’s demand that it receive civilian nuclear technology in exchange for its recent decision to surrender its military nuclear program. “Without power it’s hard to sow crops, water them, cut them, refine them or take them to market.”

Though Moscow, Seoul and Beijing are sympathetic to this argument, Tokyo and Washington, have demurred. Their concern is whether the world’s last Stalinist state will ever cease threatening South Korea and passing on its nuclear (and missile) technology to rogue states such as Pakistan, Libya and Iran in exchange for much-needed hard currency.

North Korea desperately needs huge amounts of capital to restructure its Soviet-style, heavy industry-focused economy and sustain the ambitious social programs it put in place during the ’60s and ’70s. Then, North Korea’s economy was bigger than South Korea’s, and even until the early ’80s the country was more developed than China. But today, average Chinese incomes are about four times those in North Korea, and on the Chinese side of the Yalu River that separates the two countries, tourists gather to gaze into North Korea as if it is some kind of zoo.

Yet, instead of embracing reforms as China did, Kim Jong Il is holding fast onto the Juche approach, something he justifies by fanning fears of an imminent invasion by the United States.

This siege mentality, developed after years of having to fend off the Japanese, the United States, South Korea and even big brother China’s unwarranted attentions, has turned North Korea into an economic basket case.

In 2002 Pyongyang half-heartedly experimented with economic reforms by allowing farmers to sell their own produce and setting up special economic zones in places such as Kaesong along the South Korean border, says Corrada Letta, a senior advisor to the president of Kobe University in Japan who just authored a report on North Korea for the European Union. But it all had little effect.

“The greatest problem in Pyongyang is human,” Letta says. “Their political isolation has also led to intellectual isolation and today in no ministry is there enough knowledge on how to go back, on what to do.”

Part of the problem is North Korea’s “army first” policy, which directs the bulk of the nation’s intellectual, economic and social capital to its armed forces.

At the DMZ, North Korean soldiers overlooking the United States’ glass and steel complex on the South Korean side looked sharp in their khaki uniforms and mushroom-peak caps. But the village homes just yards away looked ragged, with many of the children there exhibiting the stunted growth and gauntness of chronic malnutrition and disease.

Still, there is no doubt many North Koreans still fervently believe in their leader and system.

Portraits of the Great Leader and his son hung overhead and computers hummed nearby, even though they could only access North Korea’s intranet and not the Internet.

It had been in a fit of generosity that our minders had allowed us to speak with the researcher during a tour of library. But they soon felt the blowback. Later that afternoon we learned that he had been so enraged with the minders for allowing foreigners to speak with him, that he had lodged a complaint with the authorities–the repercussions of which were serious for our minders.

Opening up, it seems, is a dangerous business in North Korea.