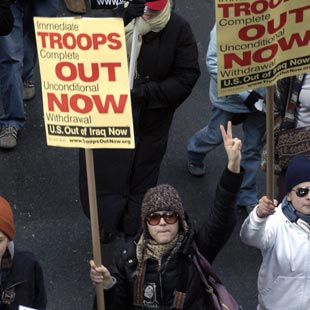 The Logic of Withdrawal

ADVANCE TICKETS ARE AVAILABLE AT Ticketmaster.com
Proceeds will be donated to Veterans for Peace, Iraq Veterans Against the War & Gold Star Families for Peace.

The BRING 'EM HOME concert will launch a national peace tour sponsored by The New Press.

Chicago stop:
Join In These Times for an evening with Studs Terkel, Laura S. Washington, Anthony Arnove, and other dynamic voices from the left.

We find ourselves in a remarkable situation today. Despite a massive propaganda campaign in support of the occupation of Iraq, a clear majority of people in the United States now believes the invasion was not worth the consequences and should never have been undertaken.

Likewise, people strongly disapprove of the foreign policy of Republicans and Democrats in Congress, particularly their position on the war in Iraq. In a September 2005 New York Times-CBS News poll, support for immediate withdrawal stood at 52 percent, a remarkable figure when one considers that very few political organizations have articulated an “Out Now” position.

The official justifications for the war have been exposed as complete fallacies. Even conservative defenders of U.S. empire now complain that the situation in Iraq is a disaster.

Yet many people who opposed this unjust invasion, who opposed the 1991 Gulf War and the sanctions on Iraq for years before that, some of whom joined mass demonstrations against the war before it began, have been persuaded that the U.S. military should now remain in Iraq for the benefit of the Iraqi people. We confront the strange situation of many people mobilizing against an unjust war but then reluctantly supporting the military occupation that flows directly from it.

In part, this position is rooted in the pessimistic conclusions many drew after the February 15, 2003,day of international demonstrations–perhaps the largest coordinated protest in human history–failed to prevent the war. This pessimism was exacerbated by some of the leading spokespeople for the antiwar movement, who misled audiences by suggesting that the demonstrations could stop the war. As inspiring as the demonstrations were, it would have taken a significantly higher degree of protest, organization, and disruption of business as usual to do so.

The lesson of February 15 is not that protest no longer works, but that protest needs to be sustained, coherent, forceful, persistent, and bold–rather than episodic and isolated. And it needs to involve large numbers of working-class people, veterans, military families, conscientious objectors, Arabs, Muslims, and other people from targeted communities, not just as passive observers but as active participants and leaders.

We will need this kind of protest to end the occupation of Iraq. But we will also need to be able to answer the objections and concerns of thoughtful, well-meaning people who have been persuaded by one or more of the arguments for why U.S. troops should remain in Iraq, at least until “stability” is restored. Below, I outline eight reasons why the United States should leave Iraq immediately, addressing common arguments for why the United States needs to “stay the course.”

THE U.S. MILITARY HAS NO RIGHT TO BE IN IRAQ IN THE FIRST PLACE.

The Bush administration built its case for invading Iraq on a series of deceptions. The war in Iraq was sold on the idea that the United States was preempting a terrorist attack by Iraq. But Iraq posed no threat. The country was disarmed and had overwhelmingly complied with the extremely invasive weapons inspections. In a rare moment of honesty, Vice President Dick Cheney told CNN in March 2001,”I don’t believe [Saddam Hussein] is a significant military threat today.”

As the case for war has crumbled, so has the case for occupation, which also rests on the idea that the United States can violate the sovereignty of the Iraqi people and all the laws of occupation, such as the Hague and Geneva Conventions, which clearly restrict the right of occupying powers to interfere in the internal affairs of an occupied people.

THE UNITED STATES IS NOT BRINGING DEMOCRACY TO IRAQ.

Having failed to find any weapons of mass destruction in Iraq–the first big lie of the invasion–the United States has turned to a new big lie: George Bush, Donald Rumsfeld, John Negroponte, Condoleezza Rice, John Bolton, and their friends are bringing democracy to the Iraqi people.

Democracy has nothing to do with why the United States is in Iraq. The Bush administration invaded Iraq to secure long-established imperial interests in the Middle East–the same reason Washington backed Saddam Hussein as he carried out the worst of his crimes against the Iraqi people, the Kurds, and the Iranians

By invading Iraq, Washington hoped not only to install a regime more favorable to U.S. oil interests; it hoped to use Iraq as a staging ground for further interventions to redraw the map of the Middle East. Several U.S. bases have been established in Iraq and are likely to remain long after U.S. troops are expelled. All of this has nothing to do with democracy. In fact, the United States has long been a major obstacle to any secular, democratic, nationalist, or socialist movements in the region that stood for fundamental change, preferring instead what is euphemistically called “stability,” even if it meant supporting the most reactionary fundamentalist religious forces or repressive regimes.

The U.S. government opposes genuine democracy in the Middle East for a simple reason: if ordinary people controlled the region’s energy resources, they might be put toward local economic development and social needs, rather than going to fuel the profits of Western oil companies.

Democracy cannot be “installed” by outside powers, at gunpoint. Genuine democracy can come about only through the struggle of people for control over their own lives and circumstances, through movements that are themselves democratic in nature. When confronted with such movements, such as the 1991 Iraqi uprising, the U.S. government has consistently preferred to see them crushed than to see them succeed.

THE UNITED STATES IS NOT MAKING THE WORLD A SAFER PLACE BY OCCUPYING IRAQ.

The invasion of Iraq has made the world a far more unstable and dangerous place. By invading Iraq, Washington sent the message to other states that anything goes in the so-called war on terror.

After September 11,India called its nuclear rival Pakistan an “epicenter of terrorism.” Israel has carried out “targeted assassinations” of Palestinians, bombed Syria, and threatened to strike Iran, using the same rationale that Bush did for the invasion of Iraq.” You don’t negotiate with terrorism, you uproot it. This is simply the doctrine of Mr. Bush that we’re following,” explained Uzi Landau, Israel’s minister of public security.

Furthermore, the invasion of Iraq is spurring the drive for countries to develop a deterrent to U.S. power. The most likely response to the invasion of Iraq is that more countries will pursue nuclear weapons, which may be the only possible protection from attack, and will increase their spending on more conventional weapons systems. Each move in this game has a multiplier effect in a world that is already perilously close to the brink of self-annihilation through nuclear warfare or accident.

Meanwhile, the invasion has also quite predictably increased the resentment and anger that many people feel against the United States and its allies, therefore making innocent people in these countries far more vulnerable to terrorism, as we saw in the deadly attacks in Madrid on March 11, 2004, and London on July 7, 2005.

THE UNITED STATES IS NOT PREVENTING CIVIL WAR IN IRAQ.

Perhaps the greatest fear of many antiwar activists who now support the occupation is that the withdrawal of U.S. troops will lead to civil war. This idea has been encouraged repeatedly by supporters of the war. “Sectarian fault lines in Iraq are inexorably pushing the country towards civil war unless we actually intervene decisively to stem it,” explained one U.S. Army official, making the case for a continued U.S.presence.

But Washington is not preventing a civil war from breaking out. In fact, occupation authorities are deliberately pitting Kurds against Arabs, Shia against Sunni, and faction against faction to influence the character of the future government, following a classic divide- and-rule strategy.

Taking this idea to its logical extreme, New York Times columnist Thomas L. Friedman argues, “We should arm the Shiites and Kurds and leave the Sunnis of Iraq to reap the wind.” Such arguments are not just the fantasy of keyboard warriors like Friedman, however. As the journalist A.K. Gupta notes, “the Pentagon is arming, training, and funding” militias in Iraq “for use in counter-insurgency operations.” Secretary of Defense Donald Rumsfeld said such commandos were among “the forces that are going to have the greatest leverage on suppressing and eliminating the insurgencies.”

In addition, the Iraqi constitution, drafted under intense pressure from occupation authorities, essentially enshrines sectarian divisions in Iraqi politics. And, finally, despite all of its rhetoric about confronting Islamic fundamentalism in Iraq, the United States has in fact encouraged it, bringing formerly marginalized fundamentalist parties such as the Dawa Party and the Iranian-backed Supreme Council for Islamic Revolution in Iraq into the Iraqi government.