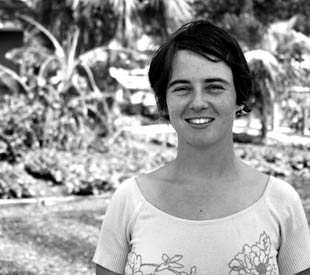 As a Lake Worth city commissioner, Cara Jennings says, "I'm wearing much more boring clothes than I did as a radical cheerleader."

In 1996, Cara Jennings, then 19, and her sister Aimee started the Radical Cheerleaders in their hometown of Lake Worth, Fla., a town of 35,000 north of Ft. Lauderdale. Their fishnet-stocking, punked-out leather outfits and shredded garbage bag pom-poms caught on, as did their obscenity-laced chants against the neo-liberal agenda, the WTO and various other political causes. As the worldwide protest movement rose in the late '90s, the radical cheerleaders became fixtures at anti-globalization rallies, and cheerleading troupes have sprung up around the world.

For the past six years, Jennings, who works as a special needs program director at a local high school, has been very active in local politics. In late 2005 she decided to run for an open city commission seat. Despite being a self-proclaimed anarchist, Jennings came in second in the primary for the District 2 commission seat, and then won in a run-off against a well-funded darling of developers and the sugar industry.

In These Times spoke to Jennings when she was preparing for the evening's city commission meeting. Heading her agenda that night was creating a day labor resource center for immigrants, arranging permits for an upcoming immigration protest and making sure the city police act appropriately at the immigration rally.

After your victory, one headline read “Anarchist Activist Gets Elected to City Commission.” How did that happen?

I've been active here in Lake Worth on a local level for six years, working on issues of affordable housing, helping to start some of the local community gardens, doing youth programs and attending a sick number of city meetings. So I've made myself visible as a young person who's knowledgeable about things happening in the city. I looked at the other people who were running and I decided that I could do a better job. So I began door knocking and pounding the pavement, attending debates, and ended up winning an election.

You were running against the most well-financed candidate in the city. How did you manage to win against all that money?

On a local level, money doesn't necessarily buy an election. In our city, there are 35,000 people and only 15,000 registered voters. So by running a grassroots campaign, and mobilizing the social justice community that I've been active with for years, we were able to succeed despite the funding of my opponent. Of great interest to a lot of the voters was the fact that my opponent was funded by some very controversial developers here in town, as well as by one of the largest sugar barons in our country, the Fanjul family. Anyone down here who's concerned about the Everglades and the environment has a definite distaste for politicians who are funded by sugar dollars.

What issues did you run on?

I ran on having accessible and transparent local government; creating a plan to bring affordable housing to our town; ending gentrification, which is really sweeping our city; the need for a civilian police review board; the preservation of open space and green space; and ending beach dredging, which is when you “replenish” the beach after storms have eroded it by bringing in sand from somewhere else. These are some of the larger issues here in town.

As just one of the five people on the city commission, how are you going to be able to turn things around?

One of my favorite things to say at the debates was that politicians don't solve community problems. We're simply a vehicle to help give the community access to the decision-making process, and to make sure that city resources are distributed equally. So I didn't make any guarantees to solve any problems, I simply told the community that I would do a lot of research and would make sure that I got their input before casting my vote on the commission. That's really what folks are looking for.

Your community is fairly small–you could knock on almost every door. What's your advice to people who live in bigger communities who want to get into electoral politics?

The irony of this whole situation is I didn't run with the absolute goal to win. I ran with the goal to use the electoral process as a way to talk to people in my community about issues that were really important. So if there's anyone out there who thinks they've got something to say and wants to address the voting public and non-voters alike, I highly recommend using election time to cause feisty debate about important issues.

How do you relate organizing your radical cheerleading troupe with what you're doing now?

Both are efforts to bring radical change to the current state of affairs. But clearly it's different in that now I'm part of city hall. I'm an elected official.

Something that was really uncomfortable for me running for office is that a lot of campaigning is self-promotion, whereas with radical cheerleading, it was more promoting a concept or promoting a collective of people. I struggled with that the whole election, and went into the campaign as if I was running for a set of ideas and a set of policy changes. Even in winning I see it as a win for the community here, not so much as a win for myself, because really there's a lot of downside to winning public office. I'm wearing much more boring clothes than I did as a radical cheerleader. I'm not shaking things up with quite the same pizzazz as I used to. But who knows, maybe I'll find it just as valid as being a radical cheerleader.

Since you've been elected, have you had experiences that remind you that you are inside the power structure?

Absolutely. Like being the sole vote against an issue–like the construction of a new power plant–and remembering that the way the system is set up, it's not a collective run on consensus.

I didn't intend on winning, so I didn't have a plan of how I was going to accomplish all my ideas as a commissioner. How I can do it within the system is still unclear to me, because up until now, the way I got things done was by shaming the city government into action, and now clearly I have to figure out a different technique to create the change I want to see.

The commissioner that you were elected to replace was quoted as saying, “If she can change her thinking somewhat and realize she can't change the world, maybe she'll do fine.” How do you respond to that? Is another world possible?

The concept of thinking globally and acting locally is very common because it is a great way to create change. Promoting policies that do have an impact outside of our city, such as opposition to free trade agreements, or taking a stand against the war, or refusing to participate with Homeland Security, things like this that municipalities can take a stand on, have reverberations outside their city, especially in an area like South Florida, where little or no progressive policy is coming out of municipalities.

A lot of the headlines have focused on the fact that you are a self-described anarchist. How is that going to manifest itself in how you go about governing?

The textbook definition that most folks reference when they ask me about being an anarchist is the overthrow of government. And that's an element of anarchism. I and other anarchists believe that there should be no hierarchy, and that all decisions should be made on a community level by individuals on a voluntary basis.

So it's been difficult running for office and acknowledging that I'm putting myself in a perceived and sometimes real position of power over other people. The reason that people are excited to see me out there, like at an immigration rally, is because they know, whether I like it or not, that I have additional power that they don't have. I don't want to claim the assumed power that comes with winning an elected office, but at the same time, I'm in this position to leverage that power, and be outspoken about things that are wrong and receive attention for that. I don't know really how you do that without falling into that trap of getting credit for a position of power that shouldn't exist in the fist place. It's challenging.

I've seen a few comments on anarchist discussion boards on the Web, saying, “If she was a true anarchist, she wouldn't be part of government.”

Sure. And I respect that critique. The practical reality is that in Lake Worth there's not a large anarchist community, and there's not even a large progressive community. So in order to make a better impact, I decided to run for office. I don't think it was the most anarchist thing to do, but it was a responsible thing to do.

The media outed me as an anarchist. It wasn't a secret–but for me it was more about the core issues that have a clear impact on people's day-to-day lives, not my philosophies about capitalism, or authority.

So when I went door knocking, people would say to me, “But you're an anarchist!” And I would get to have conservations about what it meant to be critical of the government and to oppose hierarchy, and to build public power, and to do that by running for office.

Now at least a portion of the population here in Lake Worth thinks that being an anarchist means that you're community driven, and that you are going to represent the interests of the people in the community, not the business interests.