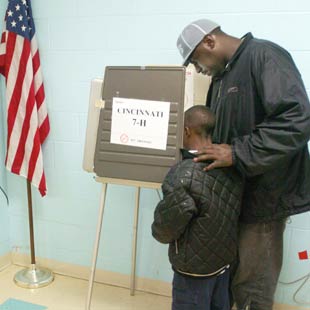 Philip Anderson votes with his son Philip on Nov. 2, 2004 in Cincinnati, Ohio.

Was the Presidential Election Stolen?

Join In These Times Editor Joel Bleifuss, his co-author Steven F. Freeman and Rep. John Conyers (D-MI) for a reading and discussion of Was the 2004 Presidential Election Stolen? Exit Polls, Election Fraud, and the Official Count

On June 2, Rolling Stone published a lengthy article by Robert J. Kennedy, Jr., “Was the 2004 Election Stolen?” That article echoes the title of a book that Steven F. Freeman and I have written that has just been published by Seven Stories Press, Was the 2004 Presidential Election Stolen? Exit Polls, Election Fraud, and the Official Count.

We provided Kennedy with an early copy of our book and he cites it when discussing the discrepancy between the exit polls, which indicated that John Kerry won, and the official count, which deemed George W. Bush the victor. That Rolling Stone article has moved discussion about the 2004 election back into the national agenda.

A particularly lively debate has occurred on Salon.com, where on June 3, Farhad Manjoo attempted to demolish Kennedy’s article. Both Kennedy and Freeman, my co-author, then published formal responses. Freeman pointed out that while Manjoo’s article is rife with problems, he completely misses the boat when considering exit polls.

What follows is an excerpt from our new book Was the 2004 Presidential Election Stolen? Exit Polls, Election Fraud, and the Official Count.

Exit polls can provide a wealth of information when they are analyzed in an informed way. They are a vital tool to ensure election integrity. The best use of the exit polls is not to oppose or replace the official count, but rather to serve as an alarm system to ensure democratic process.

It may turn out to be the case that the most accurate count in the 2004 presidential election was the exit-poll result. But the point isn’t to have to choose now between the exit-poll result and the official count. When exit polls contradict rather than confirm the official count, other parts of the machinery of democracy need to be activated–including the free press, which has the skills and the responsibility to investigate, and nonpartisan government bodies, which, through an entirely different array of methods, also have the skills and a civic mandate to investigate.

Our investigations lead us to conclude that we have little reason to trust the official results in the 2004 U.S. presidential election. Few jurisdictions provided compelling verification that votes were counted as cast. Sixty-four percent of Americans voted on direct recorded electronic (DRE) voting machines or optical-scan systems, both of which are, to different degrees, vulnerable to interference through hacking or programming fraud. In most cases Americans are being asked, in effect, to place our absolute trust in voting-machine corporations that have failed to meet minimal expectations of impartiality, honesty, freedom from conflict of interest and transparency. Why haven’t the companies that produce electronic voting machines made them so that they provide an audit trail (which is easily achieved through paper records)? And why haven’t they allowed government regulators to inspect their software? The answer to both these questions is that no one has effectively demanded that they do so.

As is the case in any system where there are incentives to cheat, random audits must be conducted to keep voting machine companies and office holders honest. In Ohio, the Green Party paid for a recount of Ohio’s ballots, but rather than acting in accord with Ohio law that counties choose a random sample of 3 percent of the total votes cast, Secretary of State Kenneth Blackwell interpreted “random” to mean a sample of the county’s choosing. As American Statistical Association President Fritz Schueren put it, this is “analogous to IRS agents allowing taxpayers to choose for themselves the items on their tax returns to be audited.”

None of the explanations given thus far explained why the official count differed so dramatically from the exit-poll results. The discrepancy must be investigated impartially and by institutions that can be trusted to conduct such investigations.

There is still hope. New legislation has been proposed and important lawsuits and legal actions are underway. The most significant proposed national legislation is Rep. Rush Holt’s (D.-N.J.) Voter Confidence and Increased Accessibility Act, Bill HR 550, which would require the use of voter-verified paper record in audits and recounts. HR 550 would also prohibit the use of undisclosed software and wireless communication devices in voting systems.

Because elections are administered by the states rather than the federal government, most of the other significant developments are at the state level, with closely watched reforms proposed in California, New Mexico and critical swing states such as Ohio, Pennsylvania and Florida.

Finally, DRE voting machines themselves continue to be scrutinized, even as one of the major vendors, Diebold, faces a securities lawsuit and rumors that it may discontinue its voting-machine division. In Leon County, Florida, the supervisor of elections, Ion Sancho, authorized a “test” of his Diebold voting system to see if election results could be altered using only a memory card. Harri Hursti, a computer programmer from Finland, facilitated the test, in which voters vote on a touch-screen machine and also recorded their votes separately. By using a doctored memory card in the machine, Hursti was able to produce results completely different from what the test voters intended. When, following the test, Diebold and other vendors then refused to sell new voting machines to Leon County, voting rights groups across the country wrote to Florida officials in support of Sancho.

Americans shouldn’t have to presume a fair count. The mainstream media has, to all effects and purposes, established (to borrow the phrase of the great American novelist, Joseph Heller) a Catch-22 for election investigation. No investigation without proof–but then, what proof can be had without investigation?

The American public has a right to be skeptical about whether there was a fair count in the last presidential election, and to have their skepticism proven wrong by overwhelming evidence. In any functioning democracy, this test would consistently be met without stirring controversy.

Absence of scrutiny does not make a democracy function; democratic processes do. In the case of the 2004 presidential election, the absence of reporting on the election controversy has left the public highly suspicious. A Zogby Interactive online poll one month after the election revealed that 28.5 percent of respondents thought that questions about the accuracy of the official count in the election were “very valid”, and another 14 percent thought that concerns were “somewhat valid.” In other words, 42 percent of all Americans had immediate concerns about what had happened on Nov. 2, 2004.

During his recent confirmation hearings, Supreme Court Chief Justice John Roberts was forced to acknowledge the right to vote “is preservative of all other rights.” Without the power to elect our representatives, and especially, to vote out of office those who misuse power–ultimately we have no rights at all.

In Battle For Florida, Lance DeHaven-Smith, a professor of public policy at Florida State University, writes, “As an expert on Florida government and policy, I had been … aware that Florida’s election laws were being undermined and subverted by the very people who were responsible for assuring their proper execution.” However, he says he was not too upset by this because he expected the dispute over the Florida 2000 election to lead to reforms in the electoral processes similar to those that arose from the flawed presidential elections in 1800 and 1876. He writes: “What alarmed me was not the malfeasance and misfeasance of high officials but rather the inability of both the public and the media … to conduct a postmortem of the election fiasco, determine who was responsible for the electoral breakdown, hold officials accountable for any crimes, and enact constitutional and statutory reforms as necessary to root out corruption and to correct flaws in the system.”

He goes on to note that the United States appears to be following the path of ancient Rome and Grece. Referring to the two great democracies of antiquity, he writes: “The first step of degeneration was a subversion of law in the name of higher values, such as stability and national security; and the decline into tyranny went unchecked by institutionalized oversight bodies, which we now refer to as the courts, because these bodies themselves became involved in the rivalry fueling the downward spiral.”

The courts and the media are widely recognized as the bulwarks of democracy. But the Supreme Court in Bush v. Gore inserted partisan politics into the judicial process and derailed the democratic process, while the U.S. media has, since that ruling, systematically avoided any reporting on serious election dysfunction.

But when we place the blame only on the media and our national oversight bodies, we are too complacent. A nation depends also on its professional and educated elite to protect, or at least speak out about, abuse of power. But so few of the professionals and academics, who sit comfortably atop the status quo, have been willing to take responsibility as individual citizens. And in the end the question does rest with the citizenry, all the citizenry. How far are we going to let things go? How hard are we willing to fight for our democratic principles and processes?

If meaningful change is to come, it will be because something changed in us all, bringing a new wave of skepticism, of hope, of honest inquiry, of anger and of common purpose.