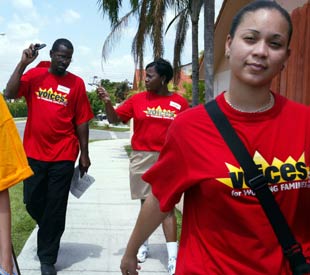 They're idealistic now--but will they stay engaged?

Do You Have a Minute for ?

How the canvassing industry is burning out progressive youth

There’s a word that gets tossed around in canvassing offices to describe people like Christian Miller: “scrappy.” That’s not because of his skinny frame and sparse, wiry chin-scrabble. Rather, in an industry where the average career lasts two weeks, Miller, 28, canvassed door-to-door throughout Los Angeles for four years.

In the last 30 years, canvassers like Miller have become the most common–if unsung–figures in political activism, going door-to-door or standing on busy street corners to talk to people about various public interest issues. It took Miller a minute to tick through the long list of campaigns for which he’d raised money: solar energy bills, forest protection, Sierra Club, Human Rights Campaign. All were operated by the same company: the Fund for Public Interest Research (commonly known as “the Fund”), a national nonprofit founded by the Public Interest Research Groups (PIRGs) in 1982. Since then, canvassers for the now-ubiquitous state PIRGs have raised over $350 million and gathered more than 20 million signatures for causes ranging from environmental protection to gay rights. The Fund holds a near-monopoly on the canvass industry, running 30 to 60 offices each summer, with thousands of canvassers working on dozens of campaigns.

And yet, the canvassers are not members of any particular organization–they are outsourced labor, often making less than minimum wage. It’s not surprising that the average career is so short–few of them stick it out.

“The money was enough to live on, and keep me from going further into debt, and I enjoyed the work,” Miller says of his remarkable four-year stint. “I was able to experience the benefits immediately–just by going up to people’s homes and putting these issues on their radar.”

I met Miller in June, near his home. He was wearing a denim jacket sporting classic rock band buttons, looking every bit the unemployed dude living in L.A.–which by that point, he was. Six weeks earlier, the Fund had shuttered his office. It seems he was too scrappy for his employers, particularly in his role as a union steward.

“That made some sense of the things I had seen in the last year-and-a-half,” says Miller, who had begun to notice erratic reimbursements, paycheck miscalculations, slippery vacation days and other office policies that the streeet canvassers’ petition had cited. “But I still thought that [unionizing] was a drastic step,” he says.

As the years passed, that attitude would change. “I got sick and tired of coming into work and finding that somebody who’d been busting their ass for months was suddenly gone,” he says. Miller became a protective uncle to many of the younger canvassers, helping them navigate the Fund’s complicated work and pay policies and advising them on how to pace themselves.

By 2005, the L.A. door-to-door office had seven canvassers with more than six months of experience–all of them close friends. “Four of us had been there over a year, we had 11 years between the seven of us, and the average age was 28–which is practically unheard of,” Miller says.

It seems that management noticed this unusual group as well. Several of the veteran canvassers reported threats–implicit and explicit–to their job security. “If we wanted to hold onto our jobs,” says Miller, “not unionizing was not an option.”

In spring 2005, the door-to-door office voted to unionize.

Midway into our conversation, Miller took me to meet Marcy Harris on her day off from work at the Fund’s Telephone Outreach Project. Miller and the other door-to-door canvassers were in touch with the TOP callers throughout the union process, and remain close to this day. Miller and Harris often finish each other’s sentences and expand the other’s stories.

Harris, who started at the Fund in August 2001, has a sweet, soothing voice, and excels at rolling a conversation along–perfect for phone canvassing. “I came in excited to be able to make a difference in the world, really affect change, while being a wage earner and keeping my life modest,” she says. “September 11 strengthened my resolve … and our directors made us feel like we had to fight harder against the Bush administration.” Harris soon became one of TOP’s all-time earners.

But over time, Harris and her co-workers saw a similar accumulation of “little things” that added up to an untenable working situation. They still liked their jobs, but as the door-to-door canvassers down the hall became increasingly organized, they paid close attention.

So did their managers. During the summer of 2005, the TOP callers were suddenly swarmed with attention from management, and when the door-to-door office successfully voted to unionize, several high-level Fund administrators flew to L.A. for extensive meetings with them. “They were all love and kisses,” says Harris.

This love can be partly explained by the dirty little secret open to everyone in the canvass industry, except perhaps the canvassers themselves: A canvass itself doesn’t raise money. A successful canvass campaign covers its own overhead. The organizations make their real long-term financial gains from the donor rolls that a canvass generates, which can be sold or used in-house.

The Fund executives, who had paid little attention to the door-to-door canvasser’s unionizing attempts, insisted that the caller’s problems did not need to be resolved by a union. But, Harris adds, “They never did actually ask us what those problems were.”

Staunch managerial pressure against unionizing onlyl pushed the callers closer to it. The TOP office voted to unionize on Sept. 22, 2005.

Miller and Harris say the unionizers were not quite asking for pay raises or better hours. When I asked what specific issues drove them, they either had simple complaints–missed paychecks for extra work days, mishandled reimbursements, no paid breaks allowed during the calling hours–or complicated explications of the Fund’s elaborate quota system and attendance requirements.

“We realized we weren’t going to get rich working here,” Miller says. “We thought, for all the good work our employer does, they need to learn how to treat their employees.”

After their near-unanimous votes to unionize, the L.A. Fund employees thought they’d done the hardest part. “But the truth is,” Harris says, “that’s when it got really hard. That’s when the waiting began.” And the firing.

At the door-to-door office, union supporters were picked off one by one. At the TOP office, the five most strident union supporters were fired in one night. Both offices had been placed in a “hiring freeze” since the petitions, so staff was dwindling. Despite this and their tanking pay, they were determined to pursue the union contract as far as they could, and filed a number of charges with the NLRB.

The Fund took three months to agree to the first negotiation meeting with the door-to-door office union reps, and then stalled negotiations in a series of almost comical feints that lasted nearly a year. The TOP callers’ union reps called the Fund’s national political director, Wendy Wendlandt, “almost daily,” never to receive a response. (My phone calls to various Fund representatives, including Wendlandt, also went unreturned.)

The deadlock attracted attention in high places. Rep. Hilda Solis (D-Calif.) reprimanded the Fund in a letter dated November 14, 2005, writing “I urge you to reach an agreement with the canvassers and callers employed by your company in an expeditious manner.” But the negotiations never did progress.

On April 28, 2006, almost one year after its staff filed for a union petition, the L.A. door-to-door office, one of the top grossing offices in the nation, was shut down and its two remaining employees let go.

After eleven months on a hiring freeze, the L.A. TOP office was shut down in August 2006. The staff’s charges were ultimately dropped by the NLRB, but the state labor commission has found in the callers’ favor, ordering the Fund to compensate all TOP employees for five years’ (and several thousand dollars) worth of unpaid workday breaks.

“We’ve all come to realize,” Miller says, “that our nation’s labor laws are not designed to protect employees from employers who resort to measures as self-destructive as those the Fund has taken.”

Miller and Harris’ personal stories–of idealism beset by frustration and turned to disillusionment, and of “mysterious firings” and “staff purges”–are wholly typical of the many accounts recorded in Activism, Inc., a new book by Dana Fisher, a sociology professor at Columbia University. Fisher interviewed hundreds of canvassers over a period of several years, with the permission of an organization that in her work goes under the pseudonym, “the People’s Project.” This organization is acknowledged to be one of the largest canvassing organizations in the United States.

Fisher found that canvassing experience severely limits the entry points for young people looking for a career in social justice. According to Fisher, the canvass industry yields a remarkably “small percentage [of canvassers who find] other work in politics after canvassing.” Far more often these young people go to the private sector. (This summer, Miller took a job with a solar panel installation company.) Activism, Inc. suggests that rather than a breeding ground for new generations of grassroots activism, the industry is eating the left’s young.

But who can change this system? The Fund has plenty of clients, and the clients get what they want–cheap lists of new donors. It’s the canvassers themselves who provide that value, through the investment of their youthful energy and political passion. In Los Angeles, this group was trying to ensure that their investment brought sound returns. Can we say the same for progressive politics?

Greg Bloom is a former canvasser currently writing in Miami. Learn more about the organizing drive at MyDD and the canvassers' organizing Web site.