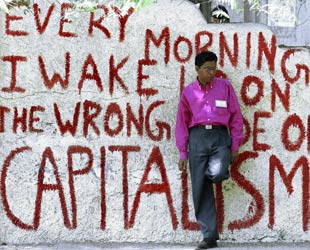 Eyes Off the Prize

As Iraq dominates U.S. attention, China, India and Iran are emerging as the next world powers

About 30 years ago, U.S. diplomats famously dismissed the civil war raging in the jungles of Cambodia as a “sideshow” to the Cold War. Callous as that was, the uncomfortable fact remains that the diplomats were probably right. As bloody and heartrending as the situation in Cambodia got by 1977, in the end it appears to have had only a limited bearing on the wider historical forces at work in the world, adding a further dimension of sheer meaninglessness to the tragedy and trauma that still haunts millions of Cambodians.

Today, headlines are fixated on the gore and chaos unfolding in Iraq. The conflict there has been shaping the outcome of the elections in many Western nations, and is certain to be the most contentious foreign policy issue in the 2008 U.S. presidential election. Yet this unrelenting focus on Iraq obscures the reality that in another 30 years the Bush administration’s adventure there will probably look like the Cold War-era face-off in Cambodia does now–a tragic mistake fuelled by hubris that cost countless innocent lives and billions of dollars, but which ultimately had only a limited effect.

Instead, the principal dynamic shaping life in the year 2037 will be the re-emergence of three ancient nations: China, India and Iran. Their powerful economies, muscular militaries, ambitious politicians, nationalistic populaces and resurgent cultures will irrevocably alter the lives of the 2.9 billion people who will then be living within their borders. But beyond that, these three countries will radically alter the balance of power in the world and give people and nations everywhere a new impetus to recreate their own societies.

China is the nation whose resurgence is best understood in the West. But despite the media hype around China, the country is only of marginal interest to the average American citizen and policymaker, as illustrated by the fact that when Chinese President Hu Jintao visited Washington earlier this year President Bush didn’t even offer him a state dinner, dismissing him with just a hurried lunch. India, for all the ferment and change it is experiencing, receives hardly any diplomatic or media attention. Both official and general perceptions of this complex and contradictory country generally revolve around banal sound bites of it being a “software superpower.” And, because official and public views of Iran are so dogged by miscomprehension and prejudice, the entire country is seen almost exclusively through a political lens, even though Western diplomats themselves tell us the Islamists ruling Tehran are almost totally out of step with the rest of the country.

The relatively few editors, businessmen, academics and officials committed to studying China, India and Iran provide us with invaluable insights into these countries. But they still generally label what we are seeing in these three ancient civilizations as “amazing change.” In reality, it is much more: not just change or evolution, but a paradigmatic shift that will challenge the basic framework of the post-WWII world.

As with any new idea, the world is trying to cope with the changing dynamics in China, India and Iran by squeezing them into existing structures and processes. But the national ambitions of the rising East and the sheer scale of their change will force a major, if not complete, re-thinking of the global system.

Just as the turn of the last century saw Germany, Japan and Italy demand (but so misguidedly pursue) their own place in the sun, China, India and Iran will soon demand that the global system that currently protects the United State’s interests adapt to accommodate their own economic and strategy ambitions. The most immediate impact will be on the three pillars of U.S. dominance: the global financial system that has the U.S. dollar at its center, the global oil and gas trade which the United States currently controls, and America’s “soft power,” or its ability to win friends and arguments based on the popularity of its culture and values.

Today’s global financial system is based around an informal but effective agreement labeled Bretton Woods II, which revolves around the idea that, de facto, the world is following a regime of fixed global exchange rates just like the original Bretton Woods regime maintained de jure from 1945 to 1973. While the original Bretton-Woods was a formal system that fixed nations’ currency rates to their gold reserves, Bretton Woods II is an informal arrangement that pegs exchange rates to the U.S. dollar.

Currently, more than 30 nations, including China and Saudi Arabia, have their exchange rates pegged to the dollar in one form or another, allowing them to export their goods into the United States and maintain huge trade and current account surpluses. This arrangement works as long as this surplus is used to purchase U.S. dollar-denominated debt, including the U.S. national debt. With this money coming from China, Saudi Arabia and other countries, the United States can then finance its $8 trillion budget deficit. This allows the U.S. Federal Reserve to produce enough money to stimulate spending by U.S. consumers, who will then buy Chinese-made clothes and home theatre systems (or Saudi oil) via the “fixed” exchange rate. The Asian countries then invest their profits into U.S. T-bills–in other words, lending it back to the United States so the cycle can repeat itself over and over again.

This system has worked well until now. China is an exporting juggernaut and has about $1 trillion in foreign reserves, most of which is used to buy U.S. debt, including $350 billion in U.S. T-bills. This has allowed Americans to live beyond their means on someone else’s money, while also allowing the United States to raise its huge debt in its own currency, thereby neutralizing any currency risk.

This can happen because international loans are mostly denominated in dollars and when a country borrows too much its own currency depreciates, thus making it more expensive for the borrowing country to pay back its dollar-denominated debts. So, for example, if India borrowed $1 billion from the World Bank in January 2006 when the exchange rate was 10 rupees to the dollar, that means in rupee terms India borrowed 10 billion rupees. If India borrows another $1 billion in 2007 and investors deem that excessive, the value of the rupee will fall to, say, 12 rupees to a dollar, which means it will now cost India 12 billion rupees to pay back the original $1 billion it borrowed.

What policy makers should now begin to grapple with, according to former U.S. Treasury Secretary Lawrence Summers, is that the rationale for China to buy U.S. debt is slowly fading. Beijing’s huge stock of dollars is threatening its own economy with inflation and the United States’ mammoth debt is making China and other countries wonder if U.S. dollars are truly a wise investment. In the last year alone, China, the United Arab Emirates, Russia, Italy, Switzerland, Qatar and New Zealand have all said they will reduce their U.S. dollar holdings and buy more gold and Euros.

China also realizes its dollars are subsidizing U.S. growth when they could be used on domestic development projects and/or lent to other Asian nations with whom it wants to buy influence at the expense of the United States. Though Chinese officials are generally deferential to the United States in their public comments, many say privately that they realize that China is lending money to the United States, which in turn is lending dollars to global institutions such as the International Monetary Fund (IMF) and thereby acquiring greater clout over the global financial system, particularly over the countries dependent on the IMF for loans.