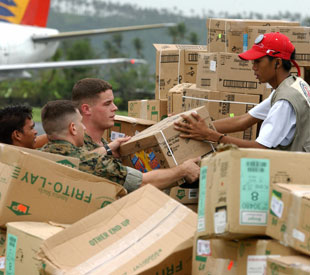 Who Does U.S. Food Aid Benefit?

Last month, in a move that shocked observers, CARE, one of the world’s largest humanitarian organizations, rejected $45 million in U.S. food aid, shining a spotlight on a practice the group says may hurt starving populations more than help them.

Complaining that U.S. food aid policy is inefficient, unsustainable and perhaps even detrimental to combating food insecurity, CARE belives “enough is enough,” according to Bob Bell, director for CARE’s Food Resource Coordination Team. The decision comes at a time when other humanitarian and food advocacy organizations are calling on members of Congress to rewrite food aid policy that puts starving populations first when they authorize this month’s 2007 Farm Bill.

The United States is the world’s largest provider of international food aid, supplying more than half of all food aid designated to alleviate hunger, about four million metric tons of food per year. As currently implemented, U.S. food aid lines the pockets of American agribusiness and the shipping industry. Under existing rules, at least 75 percent of food aid has to be grown and packaged in the United States, and shipped using U.S. flag-bearing vessels. Unlike most countries that donate food, the United States sells a portion of its food aid, either by selling it to recipient governments, or allowing it to be monetized, a process where food aid is sold to generate cash for development projects. And while most donor countries provide cash as food aid, the United States insists on giving in-kind donations.

Back in 2002, Richard Lee, a spokesman for the United Nation’s World Food Programme, told Greenpeace that the best way to confront famine is through cash donations, rather than food. “We prefer cash donations as they offer us greater flexibility - with cash donations we can purchase locally, enjoy greater flexibility and also speed things up,” Lee told Greenpeace. “We can get more for the money if we have cash. We can do the job faster as cash lets us buy the right food we need at the right time.”

The small-farmer advocacy organization Institute for Agriculture and Trade Policy (IATP) says U.S. food aid policy is fraught with problems. Sophia Murphy, senior advisor for IATP, says that while “all food aid is imperfect,” U.S. food aid is “more hamstrung than most [because of] a series of restrictions that serve U.S. domestic interests and not the people in whose name the programs are funded.”

Because most of the food aid must originate from the United States, it can take months to reach populations in crisis, sometimes too late, or as Murphy warns, at a time that can “clash with a local harvest instead of bridging a gap between harvests.” The ties to U.S. shipping companies also increase the costs of food aid. A recent Government Accountability Office (GAO) report found that rising transportation and business costs have reduced food aid deliveries by almost half. For one food aid program, the GAO noted that shipping costs ate up 65 percent of total expenditures.

While the lack of propitious timing can undermine local economies, so too does monetization. Under this practice, NGOs stepping in to feed starving populations sell U.S.-subsidized food aid, often at prices under the cost of production, which swipes away any local competition. “Unless very carefully managed, [the sold food] then brings down prices in local markets for the local farmers, depressing production when you want to encourage it,” Murphy says.

Yifat Susskind, communications director of the human rights group Madre, believes this practice is extremely harmful. “The result, on a very large scale, has been bankruptcies, economic dislocation and physical displacement of literally millions of farmers throughout the world,” she says.

Susskind says this harm is “in very sharp contrast to what would happen if food was purchased from farmers who were very near or in the place where food aid was needed.”

Madre, IATP and other organizations are advocating for food aid to come from local producers or from locations closest to the population in crisis.

Furthermore, Susskind adds, dumping subsidized food is unfair because, “[Governments of most countries] have been forbidden through trade agreements put in place by other rich governments from legislating the same subsidies that are available to large-scale farmers [in the United States].” These same free trade agreements are often at play even as populations wither from hunger.

“We tend to think of food aid as humanitarian assistance, but food aid is structured to meet the broader foreign policy objectives of the U.S.,” she says. “One of the things that happens is that food aid as humanitarian assistance works at cross-purposes with the larger economic trends so that the framework of neoliberal policies and trade rules as we know them now forces countries to stop growing food for consumption and to switch over to growing cash crops for exports.”

The United States Department of Agriculture (USDA) and the United States Agency for International Development (USAID), the agencies responsible for implementing food aid, did not return interview requests. But the USAID website echoes Susskind’s assertions that food aid policy is designed to further U.S. interests. A 2006 paper published by USAID said that U.S. foreign aid “will seek to use bilateral foreign assistance to build toward a safer and more secure, democratic, and prosperous world to enhance our own national security.”

Ironically, U.S. food aid policy may even be creating starving customers through the environmental costs of the program. The policy props up industrial agriculture and factory farms, which are a huge source of pollution that contributes to climate change. And, as Susskind notes, the first effects of climate change are “happening in the places where people have the least resources to adapt. Those are the same countries that become candidates for food aid.”

As if environmental instability did not pack a big enough punch, U.S. food aid policy is toying with people’s physical health by including genetically-modified food in its donations. The World Food Programme announced in 2002 that it had secretly been delivering GM food from the United States to countries in need for seven years.

As U.S. corporations rake in money off starving populations, the NGOs serving these populations also benefit under U.S. policy. The money made selling U.S. food aid is used as income for NGOs.

By turning down the $45 million in U.S. food aid, CARE drained its own pockets. But Bell says that while the organization has benefited from monetization, “in terms of our own program principles, we want to try and use food aid in the most effective ways.”

After CARE’s announcement, the Alliance for Food Aid–a coalition of NGOs including World Vision, Feed the Children, and the American Red Cross–came to the defense of monetization. Ellen Levinson, executive director of the Alliance, said in a press release, “While one organization may decide not to conduct food aid programs, there are many other organizations that remain committed to using food aid as an important tool for combating hunger.”

The Alliance did not return interview requests.

According to Murphy, many NGOs defend the system “because it provides a lot of money for development that would not likely be replaced were the programs to be reformed; no one expects Congress to authorize the cash equivalent of the food currently donated as food aid. Although food aid as currently used is very inefficient, a lot of development projects now depend on the money generated by food aid to function.”

Bell says that while CARE understands NGOs’ dilemmas, given the long list of problems associated with food aid, “one has to ask themselves, can’t we do this differently?”

For Bell and other organizations, that would mean untying food aid from in-country restrictions that require food to be sourced in the United States and ending monetization and moving to a cash-based system of donations.

In March, as part of its Farm Bill proposal, the Bush administration recommended using 25 percent of the food aid budget for local and regional purchases of food, rather than U.S.-originating food. Although the House of Representatives dropped this condition from its version of the Food Bill, groups are still lobbying Congress to enact it when they authorize the legislation this month. In 2005, at the behest of agribusiness, shipping companies and NGOs, Congress rejected this same proposal.

Murphy says the priority needs to be “longer-term planning to rebuild food security in the afflicted regions.”

In the meantime, Madre is drawing attention to what Susskind calls a “corrupt and damaging” food aid policy.

“It’s criminal really that bureaucracy and people’s profit motives are getting in the way of feeding the hungry,” Susskind says.