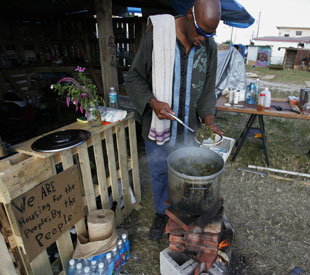 A homeless man serves himself a plate of cooked greens near the 'Liberty Cafe,' a makeshift kitchen built by activists in a vacant lot in Miami's Liberty City last year.

Feeding the Hungry is a Crime

The stake-out was almost comical in its absurdity: On April 4, 2007, undercover police counted how many times Eric Montanez, a 22-year-old volunteer with Food Not Bombs, dipped a serving ladle into a pot and handed stew to hungry people.

Once Montanez had dished up 30 bowls, the police moved in, collecting a vial of the stew for evidence as they arrested him for violating an Orlando, Fla., city ordinance: feeding a large group. Two days into his trial yesterday, Montanez was acquitted by a jury of the misdemeanor charge, but was cautioned to obey the law.

As activists celebrate the verdict, the Orlando Police Department has said it will continue to ordinance, making the fight for the free flow of food in the city far from over.

“He is on trial for the crime of feeding the homeless–literally,” says George Crossley, a member of the Stop the Ordinance Partnership (S.T.O.P.), an alliance of 19 advocacy groups, including Orlando branches of Code Pink, the NAACP, and the National Organization for Women.

What Crossley and others are trying to stop is a “large group feeding” ordinance passed in July 2006 by the Orlando City Council that essentially bans groups from providing food to more than 25 people in downtown parks without a permit.

Under the ordinance, groups can only obtain two permits a year per park for the purpose of sharing food with a large group. Although the ordinance does not explicitly target the homeless, the guillotine falls on their heads, as they are largely the benefactors of churches, charities and activist groups serving free food in easily accessible parks.

“Eric’s arrest shows both the heartlessness of Orlando towards the destitute and those who aid them,” the Orlando Food Not Bombs (FNB) chapter said in a statement in April.

Just as Orlando is cracking down on free meals that make life more bearable for homeless people, so too are other cities. This month, West Palm Beach, Fla., passed a similar ordinance that criminalizes feeding the homeless in public places, and last week officials in Cleveland, Ohio, prohibited groups from sharing food in the city’s Public Square. In February, a man in Jacksonville, Fla., was given a citation for handing out food to the homeless without a permit, though it was later thrown out. And FNB says fear is spreading in Albuquerque, N.M., that city officials may pass a similar ordinance, which has long been an avenue used to force out homeless people.

Volunteers and activists are decrying the laws, calling any measure that keeps free food out of the hands of the needy inhumane.

“It’s essentially saying that homeless people are not worthy of attention or respect and they’re nothing more than pigeons who should be fed some place else so they’re not a bother to mainstream society,” says FNB Co-founder Keith McHenry.

McHenry says feeding the homeless is part of a larger social justice agenda.

“There’s a broader principle in America that we’re trying to address, and that is, food is a human right, not to be relegated to being a commodity,” McHenry says. “People who are hungry in this country deserve good, nutritious food without having to go through a lot of bureaucratic hurdles to get that food, and without having to be demeaned.”

As with the other city ordinances, Orlando designated a specific area away from downtown businesses where groups could offer food without a permit. But McHenry says the purpose of visibly feeding homeless people is to draw attention to the problem, and that FNB rejects hiding a situation that the city refuses to confront compassionately.

“They say, ‘If you want to feed people, why don’t you do it out of sight?’” McHenry says. “That’s not our goal. Our goal is… to change society.”

The designated area in Orlando, however, is gated and groups must notify the authorities to unlock the space before every food sharing.

Brian Davis, director of the Northeast Ohio Coalition for the Homeless, says Cleveland police notified the group on October 3 that groups and churches could no longer provide food in the Public Square because of health hazards. Davis was told the city had discovered rat holes at the park. The Cleveland City Council did not return calls seeking comment.

According to a recent blog post by Davis, “The Chief of Police and the entire command staff stopped a group from unloading their food on the Square. Then they tried to move to another park and that did not work because law enforcement stopped them. The group was told that if they unload that they would be arrested.”

The groups were also given an alternate site for food sharing, but Davis told In These Times, “It couldn’t be a worse place to go.”

Shawn, an FNB volunteer in Cleveland reluctant to give his last name, says the regulation on feedings in the park is taking a toll. “What [the ordinance] has accomplished is probably diminished the amount of people getting fed when you’re forced to move to a location that’s too far for people to walk to,” he says.

Shawn says FNB would return to serving food in the Public Square. “It hasn’t stopped us,” he says. “There should be no law against feeding people.”

But feeding people, says McHenry, is bad for business. As tables of free food attract a larger than usual number of homeless people to city parks, nearby businesses fear their revenue streams may suffer.

He also says cities fear the presence of readily available food will bring more homeless people into their community, and “they’ll have to raise tax money to provide affordable housing and public assistance and shelters.”

Heather Allebaugh, constituent correspondent for the City of Orlando, says the city council enacted the ordinance in response to “complaints from residents and businesses immediately following the feedings of activity and drug use around the area.”

Allebaugh also says the ordinance was designed to help maintain the parks. “It’s a balance between the residents and their safety when they come to the park when the feedings are taking place,” she says.

In response to criticisms that an ordinance curtailing the availability of free food is inhumane, Allebaugh says the measure is “not a ban, but a regulation.”

“It’s just about maintaining a regulation just as we do for parades and garage sales so we have an idea of what’s happening at public parks,” Allebaugh says. “Maybe there’s extra security needed for the people attending. Maybe they need extra trash receptacles. It’s just to help us manage events that are happening within our city. I don’t think it was targeted at any group. It was more about the proper location to feed, rather than whether to ban feeding.”

The city did not enact any provisions to feed the homeless people who relied on the routinely accessible free food. Allebaugh says such services do not fall within the jurisdiction of the city.

The crackdown on food sharings follows other policies designed to penalize and ostracize homeless people. Orlando’s estimated 9,000 homeless people are subject to laws that prevent them from lying on benches and from panhandling during certain hours. Cleveland recently enacted a law that sets a 10 pm curfew at the city’s Public Square, intending to stop people from sleeping in the park.

“[The City Council] is brutal about this,” says Crossley of S.T.O.P. “This is not a game to these people. They’re not trying to find a solution to why these people are out there.”

Allebaugh counts, however, that the council is addressing homelessness through a regional commission expected to issue “findings and suggestions” in February on how to “address homelessness and hopefully come up with a 10-year plan to end homelessness.”

The harsh treatment of homeless people also comes as the number of displaced people rises. On Monday, the Associated Press reported that there are an estimated 750,000 homeless people in the United States, although the figure is difficult to pinpoint.

“The criminalization of homeless people shows that there’s no political will by our society to deal with the crisis in a humane and logical way,” McHenry says. “The reality is that homeless people are regular Americans who lost their jobs due to all the different policies that are happening, like outsourcing, and the huge redirection of our infrastructure toward the military and away from things like education and health care.”

Despite the ordinances, and the recent arrest of Montanez, activists are refusing to back down. Coinciding with Montanez’ trial, Orlando FNB has been holding a three-day event with multiple food sharings that violate the ordinance. Crossley says more than 100 people were served breakfast on Monday. As of press time, no other arrests have been made.

The American Civil Liberties Union of Florida, representing the First Vagabonds Church of God and FNB, filed suit against the Council last October, calling the ordinance unconstitutional. In 2006, a federal court judge issued an injunction on a Las Vegas measure that prohibited “providing food or meals to the indigent for free or for a nominal fee.”

McHenry says he thinks the ordinances will spur a new wave of activism. “People are already going to Orlando to risk arrest because they’re so outraged,” he says.

Crossley says volunteers already in Orlando have no plans to back down.

“Are we going to keep the fight up? You bet,” he says. “There’s not going to be any give on the part of the progressive community. The only way that S.T.O.P. would disband would be if the ordinance was repealed or defeated.”