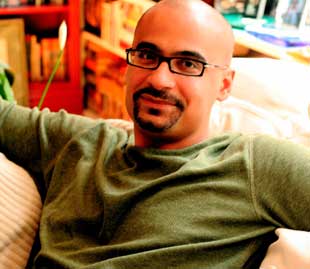 Novelist Junot Diaz worries about a country that 'continually votes in war-mongering morons.'

An interview with the author of the Pulitzer Prize winning novel, The Brief Wondrous Life of Oscar Wao

Junot Diaz, who immigrated with his family to the United States from the Dominican Republic when he was 6, teaches creative writing at the Massachusetts Institute of Technology. His new novel, The Brief Wondrous Life of Oscar Wao, winner of the National Book Critics Circle Award [Editor’s Note: as well as the Pulitzer Prize, after ITT went to press] in fiction, tells the story of Oscar, a freakishly overweight young man fixated on computer games, Marvel comics and science fiction. He’s ignored by women but obsessed with sex. His life is chronicled by Yunior, the novel’s macho narrator, who tries to help Oscar while having an on-again, off-again affair with Oscar’s sister, Lola.

Praised for its narrative inventiveness and virtuosic language, the novel shifts deftly between the lives of these teenagers in contemporary New Jersey and the experience of Oscar and Lola’s mother, Belicia – who, 50 years earlier, growing up in the Dominican Republic, was brutalized by a series of men associated with the former Dominican dictator Rafael Trujillo.

Diaz draws a compelling link between the violent masculinity of Trujillo and his henchmen and the contemporary forces that shape Oscar, Lola and Yunior. At turns outrageously funny and deeply historical, the novel’s serious engagement with Oscar’s nerdiness is matched by its interest in the persistence of historical memory and the politics of storytelling.

The Brief Wondrous Life of Oscar Wao was on nearly everyone’s list of the best novels of the year. What do you think is going on culturally, politically or in the world of contemporary literature that explains its popularity?

I wish that it was some sort of sea change, but I’m not so sure. This is the same culture that will turn around next year and nominate and celebrate a deeply conservative, deeply troubling text. I’m not so certain that this concept of linear progress is all that accurate. We have multiple, concurrent strands in literature and sometimes some of these strands are more dominant, and sometimes some of them are more recessive. It’s kind of a dance.

We have far more sophisticated readers, whether its readers of literature or television. A serial show like “Lost” or “Heroes” wasn’t possible when I was growing up. People weren’t prepared to follow a story consistently; there wasn’t the technology of DVDs to catch up. We’ve become much more sophisticated on a narrative level.

You’re regularly referred to as a Latino or Dominican-American writer. However, you also seem connected to contemporary transnational writers like Zadie Smith, Hari Kunzru, Mohsin Hamid or Kiran Desai, who are interested in hybridized identities developing in response to globalization. Do you think of yourself as an American writer, a Latino writer or do you relate to these transnational writers?

I was a Dominican kid who immigrated to the United States in the ’70s and settled in New Jersey. I was trying to write to that experience. I could never have imagined a Zadie Smith growing up – that wasn’t the sort of thing I was connecting to. I was sort of imagining, ‘Could I possibly contain New Jersey and the Dominican Republic?’

Now, the sort of paucity of my vision doesn’t de-legitimize this larger claim that there seem to be a lot of people wrestling with this issue. We’ve been doing this forever. That’s the whole project of the New World. But I do think that now there are more languages, more narrative techniques and, like you said, there’s a lot more permission. Writers give each other permission to write things. You read someone when you’re a kid who is doing something interesting and you’re like, “Damn, I can do that, too.”

But in the end I am part of a larger movement, and there is a lot of art trying to deal with what you’re describing, whether we call it transnationalism or something else.

I’m from a family of illegal immigrants. That’s very different from people whose parents were middle class or upper-middle class, South Asian or Caribbean, who came to the “metropole.” But it doesn’t change the fact that in our own ways and with our own class differences, we’re attempting to deal with similar issues.

In your novel, you weave the personal with the political through your treatment of masculinity, drawing a clear line from Trujillo’s masculinity to Oscar’s and Yunior’s. How conscious were you of exploring this through the interrogation of a Dominican or gangster masculinity?

I was obsessed with this idea that all these folks were dealing with this grand narrative of this Trujillo masculinity. What was interesting about this book was that it was making some sort of tremendous, bizarre claims about New World masculinity. I’m fascinated by this stuff because I grew up in a United States where this masculinity is the absolute operational model.

Look, everyone sits around and pretends that we’re all in this new age of masculinity and this new age of sensitivity and that the kids don’t play football anymore, they play video games, they watch the “X Games.”

The truth is that if Trujillo was alive and well, he would feel extremely comfortable in the United States. I mean, for God’s sake, the war in Iraq [would be] just perfect: He loved a civic society that misunderstood what it was and he loved an exceptionally violent governing elite.

Oscar’s interests mark him as a classic nerd, and for this reason he’s tremendously anxious about his masculinity, which the macho Yunior, the narrator, represents. But doesn’t Yunior learn a new model of masculinity through his relationship with Oscar?

And from telling the story. Yunior is attempting to unlearn and expiate himself, repent in some way, do penance. But, unfortunately, he’s doing it in exactly the same way that the masculinity he’s trying to undermine has always perpetuated itself, by being the only voice speaking.

Yunior keeps giving clear messages, that in some ways, “Look, guys, I’m trying to lay out a map of how fucked up I am and how fucked up this is.” But the very map is a product of that power, and so is the reader’s desire for that authoritative narrative. People want to feel like the person telling them the story has facts.

I was particularly moved by the last page, where Oscar talks about the paramount importance of intimacy. He’s been in search of sex, but he discovers intimacy. How did you come to that idea?

I guess I knew it from the beginning. It’s basically what’s true about every quest narrative. What you discover is that the object of the quest is just a MacGuffin, and that what you learn in the journey is actually what was valuable, but you didn’t know it. You were so focused on getting the ring, getting the spear, killing this creature, that you don’t realize that there was something else.

Isn’t there a political dimension to your emphasis on the importance of intimacy? The hyper-sexuality and violent masculinity we see in Trujillo has seeped into Yunior, and that’s politically important because the capacity to experience intimacy is ultimately going to determine the way you exercise political power.

The first rule of intimacy is that you have to drop your performances, that the “masks” have to drop.

This book is filled with characters wearing masks. We’re narrative animals, we love to wear masks, that’s the way we live. We perform. But yet, it’s very difficult to connect without the dropping of masks.

For me, that’s the art of stories. Stories are there so you can get to the point where you can finally take off that last mask. That’s what growing up is, because when you take your last mask off, you are utterly vulnerable, you are utterly in another person’s power.

You know, when I write a book, I’m the only one who speaks in it. That’s really disturbing, dude. Think about it. It’s like a person who is sitting there with little dolls and going, “Hello, Billy, do you want a falafel?” “Yes, I do.” There’s something really reclusively weird about it.

But I just can’t imagine, as a man, you can become a human without encountering other humans, and the only way to encounter a human is by being vulnerable.

Which I would want to connect back to intimacy.

Well, that’s it. The access to intimacy is vulnerability.

I think we have a pun here in masculinity spelled with a “k”: mask-ulinity.

Well, there’s no question about it.