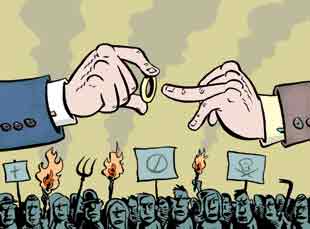 Chuck Colson, evangelical powerbroker and founder of Prison Fellow Ministries, called the coming battle over marriage equality, ‘the Armageddon of the culture war.’

If the Religious Right seemed suspiciously quiet recently in the fight against same-sex marriage – get ready for a battle royale.

Conservative groups like Focus on the Family and the American Family Association put up a relatively weak fight when Massachusetts established same-sex marriage rights. Even San Francisco’s attempt at marriage equality in 2004 yielded mostly tame and disjointed protests.

But now that the California Supreme Court has ruled that barring same-sex couples from marriage is unconstitutional, the Religious Right’s top brass is galvanizing its funding base. It has reportedly summoned vast armies of “prayer warriors” to win the battle once and for all.

Groups from across the country are spearheading efforts in Arizona, California and Florida to amend those state constitutions to permanently restrict civil marriage to opposite-sex couples.

California’s Proposition 8 – a referendum on November’s ballot – would add the following language to its state constitution: “Only marriage between a man and a woman is valid or recognized in California.” A Field Poll released in July found that, by a 51 percent-to-42 percent margin, California voters opposed the proposition, with the greatest opposition coming from voters under 30.

Arizona’s Proposition 102 states, “Only a union of one man and one woman shall be valid or recognized as a marriage in this state.” A February poll taken by Arizona State University’s Cronkite School of Journalism and Mass Communication found that 49 percent of residents would vote in favor of a marriage amendment if it didn’t affect domestic partner benefits. Residents who said they’d vote against it accounted for 40 percent, while 11 percent said they were undecided. A majority vote is needed to approve the measure.

Meanwhile, Florida’s Amendment 2 would insert the following language: “Inasmuch as marriage is the legal union of only one man and one woman as husband and wife, no other legal union that is treated as marriage or the substantial equivalent thereof shall be valid or recognized.” A June 3 Quinnipiac University poll found that 58 percent of Florida voters would support the proposition while 37 percent would oppose it. The amendment needs the approval of 60 percent of voters to become part of the state constitution.

A conference call to arms

The Religious Right is using these last months leading up to the election to amplify the debate nationally.

On his Aug. 1 broadcast of “Washington Watch” radio show, Family Research Council President Tony Perkins described California as a “springboard for the rest of the nation.” He said: “If California goes forward with same-sex marriage, mark my word, we will begin to see this march across the country. … Don’t think you are protected because your state has a state marriage amendment, those will be challenged in federal court under the federal constitution. … It is vitally important that we help California[’s Proposition 8] succeed.”

Two days earlier, on July 30, a who’s who of the national Religious Right leadership convened a conference call of more than 200 pastors in Arizona, California and Florida to lay out the strategy leading to the Nov. 4 election.

Hosted by pastor Jim Garlow of Skyline Church in San Diego, participants on the call included Perkins, Harry Jackson, senior pastor of the evangelical Hope Christian Church in Washington, D.C., and Maggie Gallagher, president of the Virginia-based Institute for Marriage and Public Policy – the principal organizer behind California’s Proposition 8.

Also on the call was Chuck Colson, founder of Prison Fellowship Ministries, who called the battle over marriage equality, “the Armageddon of the culture war.” Over the past few decades, Colson has become an evangelical Christian powerbroker and, more recently, a well-known organizer in the fight to oppose marriage rights for same-sex couples.

Leaders on the July 30 conference call asked pastors to spare no effort in the fight to pass the traditional marriage initiatives on the Arizona, California and Florida ballots and to reverse the gains of marriage equality advocates. Their exhortations met with a passionate response.

The Rev. Jim Franklin of Cornerstone Church in Fresno, Calif., emboldened his fellow callers with his assessment that, “We must be consumed with a holy anger. … This is the time to fight.” He added that a church should be identified as a “mega church,” based not on the size of its budget, but on the size of “the enemy” it takes on.

According to People for the American Way (PFAW), the Religious Right’s campaign is training church members to write editorials, call talk shows and, in general, attract attention to its message.

In an e-mail to the group’s supporters, PFAW’s President Kathryn Kolbert explained that organizers planned to deliver “a good common sense rationale to protect marriage” to those who are uncommitted on this issue.

Ron Luce, founder and president of Teen Mania, an evangelical youth ministry, told fellow callers of his plans to organize 300,000 youth and their families for an Oct. 1 telecast. The Church Communication Network, which broadcasts religious programming to 6,000 churches across North America, offered to simulcast the event by satellite to close to 1,000 churches across Arizona, California and Florida.

Other efforts include rallies, a unified “Stand for Marriage” sermon on Sunday, Sept. 21, and a “family voting weekend” in mid-October that will encourage people to vote by absentee ballot to lock in votes.

According to Charisma magazine, which “spreads the name and fame of Jesus throughout the world through the mass media,” pastors on the call were urged to participate in a 40-day fast “scheduled to begin Sept. 24 in the run-up to Election Day.”

Named after California’s Proposition 8, the campaign identified the theme as “Eight for Eight.” People will be asked to pray eight minutes every morning and evening for passage of the initiative, give $8, $88 or $888, volunteer eight hours – beginning 8/8/2008 – send notes of encouragement to at least eight pastors who stand for traditional marriage, register eight people to vote and eight more to vote by mail, contact eight families to participate in the family voting weekend and enlist eight other people to commit to this list of action items.

An infusion of cash from both sides

Although fundraising figures are not available from the Arizona and Florida campaigns, it appears that voters across the country are investing heavily in both sides of the issue. The conference call’s organizers announced that, as of July 30, they had raised $15 million of the $23 million necessary to carry out the three-state campaign and that collections would continue throughout churches into the fall.

According to the California Secretary of State Debra Bowen, as of September 4, supporters of the anti-LGBT Proposition 8 had raised $12,358,955 compared to $10,239,821 raised on the other side. Roughly 32 percent of the funds supporting the ban came from outside California, compared to roughly 49 percent of the funds opposing it. [Editor’s note: Updated figures below.]

The ban’s supporters received $1 million from the Knights of Columbus (a national Catholic men’s organization), $500,000 from the American Family Association (a socially conservative group) and $400,000 from Focus on the Family.

Beyond the funds reported, “soft” resources have a tremendous role in swinging votes. “Evangelical Christian, Catholic and Mormon churches are spreading their message through the pulpits,” says Joseph Conn, a spokesman of Americans United for Separation of Church and State. “A lot of the expenditures on behalf of these initiatives will not be reflected in spending or fundraising reports.”

Conn adds that the Religious Right has shifted into overdrive on this issue. He says, “Same-sex marriage is equal to and, perhaps, more effective than abortion as an organizing and fundraising tool.”

In 1992, before YouTube and Netflix, the hottest viral video in conservative circles was The Gay Agenda. Produced by the Springs of Life Ministry in Lancaster, Calif., the video interspersed what it called “informational interviews,” with sexually raw footage taken at gay pride parades. A pulsating club music beat pounded as scantily clad men gyrated atop floats and drag queens mugged for the camera.

Peter LaBarbera, a former Marine who now heads the singularly focused Americans for Truth about Homosexuality, sent the tape to members of the joint chiefs of staff and the U.S. Congress as they considered the “don’t ask, don’t tell” policy that bars LGBT people from serving in the U.S. military.

The video worked the Religious Right into a frenzy. Members organized a funding base for a political movement and provided foot soldiers to wage cultural warfare against the evolving gay civil rights movement. Perhaps most significantly, it coined the term “the gay agenda,” which, when used, helps activate its base.

In his 2005 book, Marriage Under Fire, James Dobson, founder and chairman of Focus on the Family, described the gay agenda’s goals as including, “the universal acceptance of the gay lifestyle … muzzling of the clergy and Christian media, granting of special privileges and rights … indoctrinating children … and securing all the legal benefits of marriage.”

The leaders of the Religious Right have long enjoyed an extensive radio and TV broadcasting reach, but the advent of the Internet has allowed them to push these streams to the Web and reach a much larger audience. Through OneNewsNow.com, the American Family News Network packages “news from a Christian worldview,” providing profiles of the Religious Right’s work as a prolific newsfeed.

For its part, the LGBT political machine has evolved significantly, as well. In addition to the national LGBT lobbies, such as Human Rights Campaign, National Gay and Lesbian Task Force and the Gay & Lesbian Victory Fund, state equality organizations have cultivated extended networks of activists who, at the prompting of an e-mail alert, will give funds, sign petitions and mobilize.

One such targeted cultivation run by Equality California (EQCA) set-up a wedding registry where LGBT couples could solicit donations in lieu of wedding gifts. The strategy has paid off. Spokesman Steve Smith says the group has raised, “hundreds of thousands of dollars online.” He continues: “The Internet means fundraising happens anyplace.”

Brad Luna, a spokesperson for the Human Rights Campaign, says it uses multiple strategies to raise funds – e-mail appeals, direct donor asks, fundraising appeals and ticket sales. He is confident that the proposition will be defeated.

“Throughout the country, our community understands and is committed to the defeat of Proposition 8,” Luna says. “Whether you are in San Jose, Calif., or San Antonio, Texas, the LGBT community, and our allies, are focused on doing our part to make sure discrimination is not written into the California constitution.”

EQCA’s Smith echoes the sentiment: “It’s California, so we are running a full-scale TV and radio campaign. The Religious Right will raise millions and we will match them dollar for dollar.”

He adds: “The stakes are huge for the nation.”

How Young Black Radicals Put the World on Notice