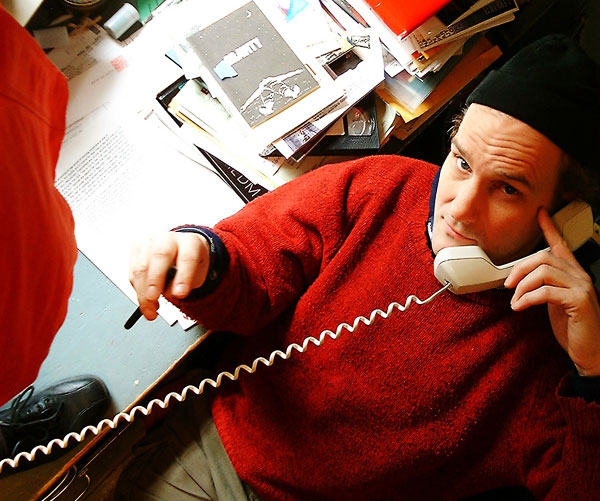 Fugazi frontman Ian MacKaye at his office in Arlington, Va.

Ian MacKaye hasn’t compromised a bit. Known for his ’80s bands, Minor Threat, Embrace and Fugazi, the 46-year-old singer and guitarist gave voice to a generation of kids and punks who were raised amid Reagan-era consumerism. Dischord Records, the Washington, D.C.-based independent label he co-founded in 1980, fostered a thriving local music community that still survives. To date, the label has released more than 150 albums and singles.

Whether with Minor Threat or Fugazi, MacKaye offers listeners a lyrical antidote to mainstream politics and greed. (“You are not what you own,” he sang in Fugazi’s 1990 anthem “Merchandise.”)

Over the years, he has committed himself to performing in all-ages noncommercial venues and to offering albums and concert tickets at affordable prices. As a result, the D.C.-native has given a generation of musicians a model for living out a similar anti-corporate philosophy.

In recent years MacKaye has discovered that the mainstream was co-opting his bands’ identity: In 2005 Nike appropriated a Minor Threat album cover image on a promotional poster. The shoe company later withdrew and apologized for its unauthorized use.

Since Fugazi’s official hiatus in 2003, MacKaye has released two albums and toured with his partner, Amy Farina, in a group called The Evens. But with the birth of their first child earlier this year, the guitar-drum duo isn’t sure when–or if–they will continue to tour.

In a year when many voters have repudiated the excesses of Reagan-era policies, In These Times called MacKaye at Dischord House in Arlington, Va., where he has worked for 27 years, (the rest of the label’s tiny staff works off-site). He discussed the nature of political change, the importance of community and what it means to be a punk rocker–and a dad.

Do you believe real political change can occur through the two major parties?

Since I can’t imagine that the structure of this country’s government is going to change in our lifetime, I’m just going to have to believe that change can come through that. If I didn’t believe change was possible, then we wouldn’t have much to talk about.

It just takes a certain kind of moment.

What has shocked you most in the last eight years?

In the last decade, there has been a central story regarding protests that has been almost totally ignored by the media. I am talking specifically about the behavior of the police who have been given the power by the government to rein in protesters with violence.

My experience in protests is that the police are always in the center of it. They are not the focus of the violence–they are the cause of it.

The fact that there are situations like what happened to protesters at the RNC [Republican National Convention] in St. Paul, and that this country of 300 million people cannot step up and say, ‘This is wrong. This is not what we signed on for. This is not what you’re supposed to be doing to people,’ that is shocking.

How do you choose whom to vote for?

My position is that this country deserves its president. Whether or not we voted for the person, or we just allow other people to steal the election, either way, we get what we deserve.

But the world doesn’t deserve it. So in almost every election I have had a single, basic approach: My vote goes to the most electable person who I think is least likely to take the country to war. That’s it. That’s the bottom line. Because war is the most direct impact that this country has on the rest of the world.

I’ll tell you what I’m looking forward to. It’s the day when a viable presidential candidate says he or she is opposed to capital punishment. That will be a great moment in the history of this country.

Do you have high hopes for Obama?

I’m hopeful. I think the basic tenor of the U.S. government has been so ugly, calculating and trivial, that [people] think, ‘That’s not a company I want to work for.’ I think the shift of the tenor to humility, graciousness and inclusiveness could re-energize people, make them feel like the government is an environment in which they might actually want to participate. This is a shift in American consciousness.

Has it become more difficult for you to control your music and the politics it stands for?

No, in fact, it’s given me an incredible opportunity to remind people of my politics and ideas. You can’t control music, anyway. Once it’s out there, it’s out there. I can’t tell you what my songs mean. You decide what they mean to you. I’m responsible for the transmission, but the reception is entirely up to you.

In terms of our image or our name, I try to be a good steward. I don’t want people to appropriate my work to forward their own products.

I see music as something sacred. And I use that word very directly. ‘Sacred,’ not in a Christian sense or even a religious sense, but in that it is something that is above the fray.

Music is a form of communication that pre-dates language. Music plays with us and we play with music. It’s a very personal, intimate exchange that evokes ideas and visualization. This is serious for me.

And at some point, music got perverted. It became entertainment. It became a way for businesspeople to get an audience in. It became the bait instead of the actual reward. I find that disturbing.

How has that change influenced musicians?

The people who sell things have an attitude that goes like this: ‘Let’s take the music and place it with our ad. That way, people will associate the deep relationship they have with music with our product.’

This is not where music was supposed to end up. It’s a tragedy that musicians have come to this sort of thinking.

What do you think about punk bands on major record labels?

I think of punk as a free space–it is the free space. It’s a place in music where new ideas are presented. That’s what it means. So, I can’t acknowledge or accept that a punk band can be on a major label. To my mind, by definition, that’s antithetical.

That doesn’t mean the people in the bands aren’t punks–they may very well be. But the decisions they’ve made have been made on a profit motive. Their band has turned into just a conventional job.

But who the fuck am I? I’m just some guy. And people in some of those bands are my friends. I don’t hold it against them. I’m not angry with them. I just find it impossible to accept. If they’re on a major label, they aren’t a punk band.

In the Embrace song “Spoke” you sang: “No compromise. No co-opt. No giving out or giving up or giving in.” Do you feel like you’ve compromised or changed any of your values since you wrote those lyrics 23 years ago?

‘Change’ is not a word I’d use, ‘evolve’ maybe. I’ve gotten older, and I’ve certainly done more thinking. I had less experience at that time, so I’ve changed to the degree that I’ve evolved.

But I stand by the lyrics. There’s nothing that I can think of, no political outlook I had then that I would disagree with now. All the lyrics I’ve written, there’s not one that I listen to now and wince.

Are you anxious about being a parent?

No, there was a period when I continually ran into other fathers, people I didn’t know, and they would say things to me like: ‘Welcome to the club, dude!’ And I started to wonder, ‘What kind of weird cult have I been assigned to here? Am I going to become these people?’

I am, of course, disgusted by mass marketing to children. You can imagine my horror when I discovered that it’s virtually impossible to buy a diaper–which is essentially a shit bag–without a goddamn corporate cartoon figure on it. It’s deeply disturbing.

At some point the branding of childhood must affect a child’s imagination.

It’s the same with music. That’s the environment that my son now lives – he lives in a house of music. We’ll see what happens.

So your son is growing up in a community?

That’s the idea. I wish it were a bigger community. I feel quite fortunate to be connected to so many people, but our society, the way it operates and the structure of it, is really quite hostile to communities. I’ve had so many friends who are important to me, but many of them have isolated in a way that was startling. It’s sad to me.

I’m very attracted to communal living. I don’t mean necessarily living in a commune, but rather, I believe in the value of proximity to other people and having an open-door policy. The open-door policy being, an unlocked door may result in the occasional devil, but a locked door insists on a thousand angels walking past.

I find that much more interesting, and much more constructive and healthy for children–and adults, for that matter.

Can you talk about a significant turning point in your career?

Right before Embrace [the short-lived band MacKaye formed in 1985], I thought about all the singing I was doing and the anger and protest of my work, and I thought, ‘What is the actual thrust of this work? What is it that I am trying to achieve?’ And I said, ‘Well, I’m trying to achieve happiness for people in the world.’

But I was spending an enormous amount of time agonizing over how to do this. I was screaming and singing about all these different subjects in an attempt to bring happiness about, but I wasn’t personally happy, and I wasn’t making the people around me happy, either. I decided that I must actually learn to live happily, and to learn to live in peace.

Jarrett Dapier is a former Assistant Publisher at In These Times. Jeremy Gantz is the Web Editor/Associate Editor of In These Times and a freelance writer and editor.