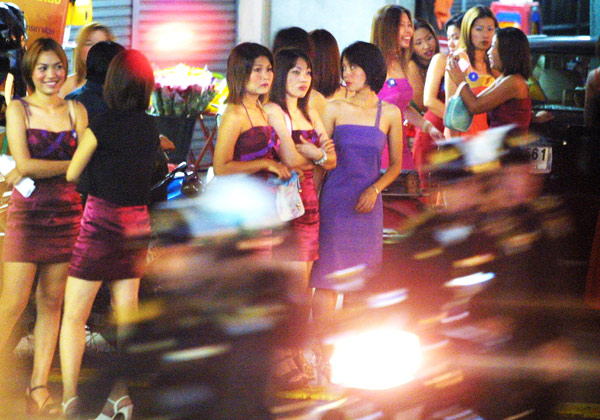 One justification for Thailand’s sex industry is that it’s ‘part of their culture.’ As though having sex with a prostitute there is akin to a pig-roast in Hawaii or taking a dip in a thermal pool in Iceland.

Like many young English teachers abroad, I was enthusiastic about–but woefully under-qualified for– my new profession. I wanted to see some of the world before I transitioned to another “more respectable” job. So, after graduating from college, I flew to Thailand and took a bus to a fishing village a few hours east of Bangkok, where I spent three weeks binge-drinking and hanging out on the beach with 15-or-so classmates–and emerged with certification to teach English to speakers of foreign languages.

I was promptly offered a job at a language school in Bangkok, teaching after-school lessons to high school and college students. I once ran into the head teacher of my school on his way home with a prostitute he had picked up at a bar. Drunkenly, he swung his lit cigarette into her arm, burning her, then looked down at the smoldering remnants and said, “At least it’s still lit.” Needless to say, this man didn’t go around giving background checks to his staff (who held daily forums in the teachers’ room discussing the varying quality of women in Bangkok’s many sex districts), nor bother finding out if their diplomas were valid. Many teachers in Thailand do not even hold college degrees, preferring to purchase diplomas online or on the Bangkok black market.

Thai women are especially prone to exploitation. Ever since American soldiers stopped off here for R&R during the Vietnam War, Thailand has been a premium destination for sex tourists–and their more permanent incarnation, known as “sexpats.”

A quick walk around the area surrounding central Sukhumvit Road shows that prostitution is rampant in Bangkok. Women are at work everywhere here. Some sit in giggling groups at outdoor bars, while others stand upon revolving platforms or long tables, listlessly gyrating against metal poles, a number pinned to whatever scrap of fabric is stretched decoratively across their bodies. The clientele are largely white and middle-to-late age. They stumble from these venues in search of beer and food (“not too spicy”), then back for more women.

In poor parts of the country, it is not unusual for women to be sold into the trade by their own families. I remember a Thai newspaper article several years ago in which a mother voiced regret for not selling her daughter for more money. While foreigners are the sex industry’s most visible clientele, Thai men are also guilty of using and abusing prostitutes.

HIV and other sexually transmitted diseases are rampant among sex workers. Some teachers I knew often came to work with visible lesions and sores because they frequented brothels. When the subject came up, teachers tried to explain it away with the wave of a hand and a shrug. “It’s good for the economy” is the most common response. “They are making their own money.” As if by engaging in sex with a woman for money they are contributing not only to the business sector, but also to the women’s lib movement.

The second most popular justification is that it’s “part of their culture and who are we to interfere?” As though having sex with a prostitute in Thailand is akin to a pig-roast in Hawaii or a thermal pool in Iceland. You simply haven’t experienced Thailand until you’ve tried it!

It wasn’t until the 2006 arrest of John Mark Carr–infamous for falsely confessing to the murder of Jon Benet Ramsey–that people began to look at the lawlessness of the English teaching profession. Carr had been an English teacher by day and pedophile on his off time. As international camera crews flew in, the Thai government began to crack down on what was becoming an embarrassment to the country.

A ripple of nervousness flowed through the teaching community as the Thai government passed new laws demanding background checks for all teachers. The government also promised that college degrees would be verified and that all new rules would be strictly enforced.

Around the same time, the government imposed tougher immigration rules allowing only a limited number of 15-day visa renewals. Previously, teachers could ferry themselves in busloads to the border, where they could walk across a bridge to Cambodia, get their passports stamped, then walk back to Thailand. This allowed them another 30 days in Thailand without needing any work visa. You could live there for years this way, traveling to the border once a month.

Of all of the so-called reforms, only the immigration laws have stuck. The other laws were only less conspicuously broken in the beginning before being blatantly disregarded later. (After all, prostitution is technically illegal in Thailand.) I spoke with more than 30 teachers in January 2009, and not one had gone through a background check or had his or her diploma verified.

Since the “crackdown,” the Thai government has arrested a slew of English teachers, most of them long-wanted by Interpol for sex crimes. In January 2007, law enforcement arrested Sean McMahon, 45. McMahon was from Oxford and had been teaching in Thailand since he disappeared in April 1999 after jumping bail for the alleged rape of an 8-year-old girl. In October 2007, officials detained English teacher Christopher Paul Neil, 32, in northeast Thailand. Neil is suspected of appearing in more than 200 online images of child abuse.

The most recent teacher-related scandal came this past December with the arrest of Canadian John Wrenshall, 62. Wrenshall had been a longtime employee of a prestigious school in Bangkok, where he had been well respected. During his spare time, he arranged for Americans to visit his home in Thailand to sexually abuse boys under the age of 12 for payment.

On Jan. 1, 2009, Wrenshall’s colleague Steve Schertzer wrote a letter on Ajarn–a website devoted to the teaching community in Thailand–describing Wrenshall as a generous and kind man, and his subsequent disgust at finding out about the teacher’s double life:

I am back in Bangkok, my teaching career long over. I sit in partial shade at a small table in an outdoor restaurant with Allan, a portly man who looked to be in his early ’50s. He works in China but sees a life here, he says, where things are easier for someone like him. He tells me about the women he has met at the bars down the road. They all want him, he says.

Doesn’t it bother him to pay for sex? Allan smiles: “We just don’t know what it’s like for them here. How can we judge?” He says this, waving one hand, palm up, in innocence, as the other hand tips a 20-ounce Chang beer to his lips.

“We know what it’s like to be a human being,” I reply, taking a drink from my own bottle.

After which, there is really nothing more to say.

Jessica Olien worked as a reporter for The Nation newspaper, based in Bangkok, Thailand, and for Egypt Today magazine in Cairo. She is currently a freelance writer based in New York City.