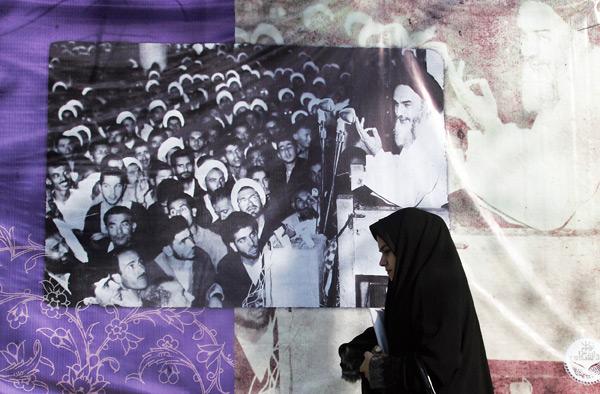 On Feb. 5, an Iranian woman walks past a poster showing the late founder of the Islamic Revolution, Ayatollah Ruhollah Khomeini, addressing supporters in Tehran.

A new book brilliantly details the evolution of gender and sexuality from pre-modern Persia to the 20th century.

Any lower-middle class merchant who could afford it often had a wife and an attractive young male assistant, who, among other functions, provided sexual pleasure for his master.

A leading Iranian scholar in exile has published a new work of history and analysis that is a howitzer aimed squarely at the hypocrisies of today’s sexually repressive theocratic Iranian regime – whose violent repression of the women’s movement and lethal campaign to purge homosexuality have revolted the world.

Janet Afary’s Sexual Politics in Modern Iran (Cambridge University Press, March) meticulously details the historical evolution of gender and sexuality, and of the roles and customs of women and same-sexers, from pre-modern Persia (500 to 1500 A.D.) right through the sexual revolution that began in Iran seven decades ago.

This panorama of Iranian sexual and gender mores and behavior, informed by a deep understanding of the role of class in the molding of sexual codes, will be a seminal work for years to come. And by reclaiming a richly textured, hidden history that the ayatollahs of the Islamic Republic of Iran have tried to erase, the book gives today’s vibrant Iranian women’s movement–and the nascent agitation by Iranian queers for their own liberation–a powerful weapon.

Women were rigorously segregated in pre-modern Persia, even at home, as families divided houses into an outer section that was the exclusive province of the men, and an inner section to which women were confined. But veiling was a practice that was widespread only at the top of the socioeconomic pyramid, serving as a marker of class distinction. (The veil impeded the work of women in the rural and largely impoverished agricultural economy, and was seldom worn by them.)

All formal marriages were arranged, often with girls just entering puberty, often leading to loveless relations. This fostered the institution of temporary marriage, or sigeh, which could last from a few hours to 99 years. Lower-level clerics supplemented their incomes by serving as brokers (or procurers) of sigeh marriages for both men and women. Religious pilgrimage cities, such as Mashad, served as sexual spas, where not only men but women in aqdi (or formal) marriages–rejected in the bedroom by their spouses in favor of a preferred sigeh partner–could come to contract their own sigeh couplings, or to find a younger cleric who served in essence as their gigolo.

And while homosexual acts were in theory condemned as sins by Islamic teaching, in practice they were rarely punished and were widely tolerated in pre-modern Iran, much as many Catholics tolerate pre- and extramarital hetero sex today.

Indeed, what Afary terms a “romantic bisexuality” was celebrated and even highly codified. For more than a millennium, Afary writes, “male homoerotic relations in Iran were bound by rules of courtship such as the bestowal of presents, the teaching of literary texts, bodybuilding and military training, mentorship, and the development of social contacts that would help the junior partner’s career.”

Sometimes men exchanged vows, known as brotherhood sigehs with homosocial or homosexual overtones. These relationships were not only about sex, but also about cultivating affection between the partners, placing certain responsibilities on the man with regard to the future of [their usually younger lover]. Sisterhood sigehs involving lesbian practices were also common in Iran. A long courtship was important in these relations. The couple traded gifts, traveled together to shrines, and occasionally spent the night together.

Examples of the codes governing same-sex relations can be found in the “Mirror for Princes genre of literature (andarz nameh), [which] refers to both homosexual and heterosexual relations. Often written by fathers for sons, or viziers for sultans, these books contained separate chapter headings on the treatment of male companions and of wives.” One such was the Qabus Nameh (1082-1083), in which a father advises a son:

As between women and youths, do not confine your inclinations to either sex; thus you may find enjoyment from both kinds without either of the two becoming inimical to you. … During the summer let your desires incline toward youths, and during the winter towards women.

This was true not only of the Sufi poetic masters of this classical period, for whom “the bond between [same-sex] lover and beloved was … based on a form of chivalry (javan mardi) and … led one to higher ethical ideals,” but of the poems of the great 20th century poet Iraj Mirza (1874-1926), and “classical poets [who] also celebrated homosexual relationships between kings and their pages.”

Afary also notes that “homosexuality and homoerotic expressions were embraced in numerous other public spaces beyond the royal court, from monasteries and seminaries to taverns, military camps, gymnasiums, bathhouses and coffeehouses. … Until the mid-17th century, male houses of prostitution (amrad khaneh) were recognized, tax-paying establishments.”

Any lower-middle class artisan or merchant who could afford to keep two persons had a wife and an attractive young male assistant, or go-fer, who served the triple function of attracting (male) customers to gaze on his beauty, helping with business, and providing sexual pleasure for his master.

In documenting the extent and complexity of same-sex relations during Iran’s history, Afary provides a thundering rebuttal to Iranian President Mahmoud Ahmadinejad’s absurd claim at a September 2007 Columbia University appearance, that “In Iran, we don’t have homosexuals like in your country.”

Afary introduces us to a host of remarkable women, including precursors of women’s liberation like Tahereh Qurrat al-‘Ayn, who left her husband to become an advocate of the new Babi religion (an off-shoot of Shiite Islam) and who created a stir by her courageous public unveiling at a Babi convention in 1848; and Princess Taj al-Saltaneh (1854-1936), a Shah’s daughter who recounted in her memoir the horrors of being deflowered at the age of 8 in an arranged marriage, and who later became a social democratic sympathizer and advocate of women’s rights.

The open agitation for women’s rights, including companionate marriage, became widespread with the Constitutional Revolution of 1906, while the first modern women’s organizations were born in the 1920s as adjuncts of patriarchal leftist parties (which concentrated on economic and educational rights for women and women’s suffrage while shunning any challenge to traditional arranged marriage and sexual mores.)

One of Afary’s most stunning revelations is how political homophobia was introduced into Iran from the West, by an Azeri-language newspaper edited and published in the Russian Caucuses. Molla Nasreddin, also known as MN, appeared from 1906 to 1931, and it influenced the Iranian Revolution with a “significant new discourse on gender and sexuality.”

With an editorial board that embraced Russian social democratic concepts, including women’s rights, MN was also “the first paper in the Shi[ite] Muslim world to endorse normative heterosexuality.” Afary writes that “this illustrated satirical paper, which circulated among Iranian intellectuals and ordinary people alike, was enormously popular in the region because of its graphic cartoons.” MN’s attacks on homosexuality “would shape Iranian debates on sexuality for the next century,” and in their wake, “leading constitutionalists enthusiastically joined the campaign against homosexuality.”

One of those greatly influenced by MN was Ahmad Kasravi, whose nationalist movement, Pak Dini (Purity of Religion), developed a broad following. Kasravi preached that “homosexuality was a measure of cultural backwardness,” that Sufi poets of homoeroticism led “parasitic” lives, and that their queer poetry “was dangerous and had to be eliminated.” Kasravi’s Pak Dini movement “went so far as to institute a festival of book burning, held on winter solstice. Books deemed harmful and amoral were thrown into a bonfire in an event that seemed to echo the Nazi and Soviet-style notions of eliminating ‘degenerate’ art.”

Eventually, Prime Minister Mahmoud Jam, who held office from 1935 to 1939, acceded to Kasravi’s demand that homoerotic poems be banned. Afary notes sorrowfully that, “in this period, neither Kasravi nor feminists distinguished between rape or molestation of boys and consensual same-sex relations between adults.”

While the law against veiling of women was promulgated in 1936, by the end of the 1940s, nearly all traces of sympathetic homosexuality had been eliminated from textbooks, newspapers and public discourse.

Afary, president of the International Society of Iranian Scholars, is a professor of history and women’s studies at Purdue University. On nearly every page of her engaging, amply illustrated new book, she disinters morsels of history and analysis that will surprise even those with a more than casual knowledge of Iran. Her account goes right up to the contemporary women’s movement and today’s ongoing sexual revolution, including the latest in Iranian gay liberation discourse.

Sexual Politics in Modern Iran is an invaluable landmark, a signpost on the road to an end of gender discrimination and sexual liberation for all.