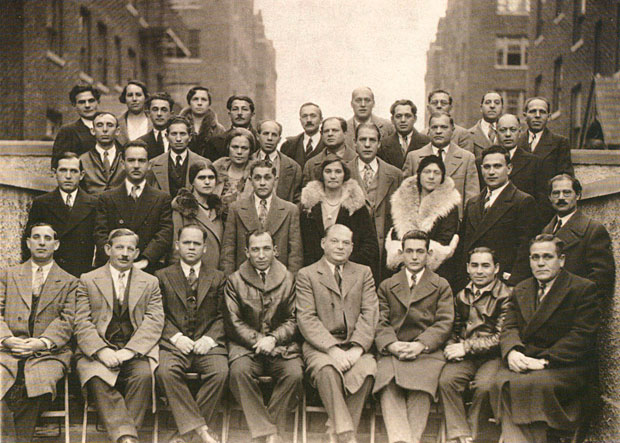 In the 1920s, Jewish Communists, pictured here, established the United Workers Cooperative Colony, one of four cooperative apartment complexes built in the Bronx.

A new documentary profiles the rise and fall of a Depression-era utopian experiment in the Bronx.

As the country finds itself in the most severe economic downturn since the Great Depression, people have been looking back to the first Great Depression to learn from FDR’s administration and how it handled the crisis. But it is not only New Deal politicians who have something to teach us. In the 1930s, working people and their movements responded to the economic turmoil in creative and radical ways, and none more so than the hundreds of New Yorkers who lived in the Coops (rhymes with “loops”).

At Home in Utopia, a documentary by Michal Goldman that will air on PBS’s “Independent Lens” on April 28, tells the story of the United Workers Cooperative Colony in the Bronx. When built in 1927, the Coops, with 740 apartments, was the largest cooperative housing project in the United States–and the only one with hammers and sickles carved into its limestone lintels.

On vacant land, located across from Bronx Park, recently immigrated Eastern European Jews, most of them members of the Communist Party and many of them garment workers, created a community where they could put their socialist ideals into practice.

The Coops wasn’t the only Jewish utopian experiment in the Bronx. The Amalgamated Clothing and Textile Workers established the Amalgamated Houses, members of the Socialist and Communist Parties built the Sholem Aleichem Cooperative, and the Labor Zionists built the Farband Houses.

In Yiddish-language newspapers, apartments in the Coops were marketed to potential cooperators with slogans like: “We want to build a fortress for the working class against its enemies.” Shares in the fortress were sold for $250 per room.

In the film, Julius Lugovoy, speaking of his parents and their comrades, says, “What they felt here was that they were the owners of both their apartment and their fate.”

The Coops founders, believing a brand new world was in birth, saw their community as one more step toward the inevitable revolution. Pete Rosenblum was 2 years old when his family, who owned a nearby bakery, moved into the Coops. “We were expected to conquer the world,” he says. “This was going to be the main headquarters.”

People from all over the world came to see this workers’ paradise. The Coops library held 20,000 volumes–in English, Russian and Yiddish. The courtyards were landscaped into well-tended gardens. Youth clubs flourished in basements that were the hive of communal activity.

From the Coops, the residents set out to live their ideals. No one could be evicted if they couldn’t pay the rent. Consequently, the Depression put a strain on the Coops’ finances, and in 1933, it headed to bankruptcy, unable to pay its mortgage.

However, responding to popular unrest, 24 states passed laws against mortgage foreclosures, including New York. It was in this political climate that the leaders of the Coops were able to negotiate a stay against foreclosure and remain the masters of their castle.

“The women, my mother included, would go up into the apartment,” says Yok Ziebel, whose parents were both union organizers. “They would crowd into the apartment and would stand shoulder to shoulder, and the sheriff’s deputies could not get in to evict the families.”

Harriete Nesin Bressack, whose father was a founding member of the Communist Party, accompanied her mother on these anti-eviction actions. “I remember yelling at the policemen,” says Bressack in the film. “They laughed and said we came from little Moscow.”

The Coops were also at the forefront of breaking racial barriers. Coops residents organized to save the Scottsboro Boys, nine young black men and boys who, in 1931, were accused in Scottsboro, Ala., of raping two white women, fellow train-hoppers, in a railway car. And in the early ’30s, the Communist Party directed the Coops’ management to invite African-American families to move in. As a result, it became one of the first integrated housing complexes in the nation–and home to some of the only black kids in America to speak Yiddish.

But fealty to the Communist Party and the resultant ideological purity had its down side. In 1943, with World War II having revived the economy, laws preventing foreclosure were abandoned and the Coops were again faced with foreclosure. The only way out was for Coops residents to agree to a monthly rent increase of $1 per room. Amid fierce arguments, they held a meeting to decide their fate.

“They voted at that meeting to not pay the dollar-a-month increase,” says Rosenblum. “And one of the arguments was that since we were the leaders of the community, that if the Coops people voted to increase their rent, all the other landlords would say, ‘Hey the Coops raised their rent so therefore we can raise your rent.’ ” The community lost the deeds to their buildings and the BX Corporation were the new owners. Yet through the 1950’s, the radical spirit that built the Coops continued with the tenants’ association that dealt with the new owners.

Of the four original cooperative housing projects built by Jewish radicals in the Bronx, the only one to flourish was the Amalgamated Cooperative, which is now home to 1,500 families, including some former residents of the Coops.

Yet the ideal that inspired the original Coops founders, the belief that the common good trumps private gain, survives through their children and grandchildren, many of whom remain active in the progressive movement today.