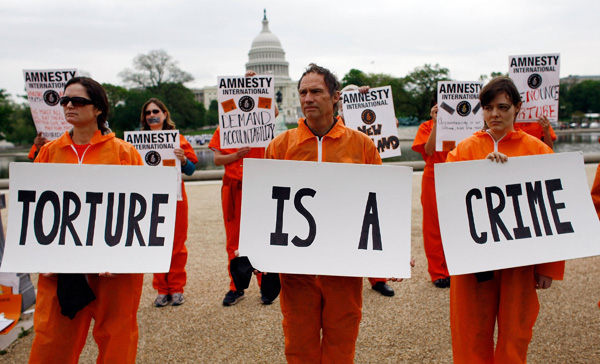 Amnesty International activists mark President Barack Obama's 100th day in office by protesting near the U.S. Capitol and calling for an independent investigation into alleged human rights abuses by the Bush administration.

The Past and Future of Human Rights

There is remarkable continuity from president to president on human rights issues: From Harry Truman to George W. Bush, all have embraced American exceptionalism and selectively made good and bad moves on human rights.

When I was in law school, I was cynical about human rights. But that was before I spent time in places where people did not have rights guaranteed by the state, and needed international human rights for their survival. That was before I was diagnosed with Parkinson’s, and rights issues became a bit less abstract.

And that was before the Albanians in Kosovo taught me to see the glass as half-full, and never half-empty.

But even Kosovars are growing skeptical about human rights–they’ve heard a lot of rights talk without the right actions. In Pristina, Kosovo, which I visited early this year, things are a mess. The international efforts to promote reconciliation between Serbs and Albanians and to support a multicultural society have fallen flat. Sure, Serb-Albanian conflict is now rare, but that is because very few Serbs live in Kosovo and, with the two groups nearly completely segregated, there are fewer opportunities for communal conflict. So much for human rights…

So how can I be so steadfastly optimistic about human rights? Without human rights, I am convinced, things would have been much worse in Kosovo. In her splendid book Inventing Human Rights, Lynn Hunt writes of “the bulldozer force of the revolutionary logic of human rights.”

But how is the logic of human rights revolutionary? Why are states so afraid of its “bulldozer force”? And what would it take for the Obama administration to demonstrate that the United States no longer fears enforcement of human rights?

This essay attempts to answer those three questions. After explaining the revolutionary past of human rights, I turn to an illustration that has been hidden in history–the efforts of African-American leaders and Nigerian students immediately after World War II to draw attention to human rights issues pertaining to race and colonialism–to show that the United States has always been extremely afraid of implementing human rights. Finally, I make specific suggestions for the Obama administration with respect to the unmet potential of human rights.

The modern human rights movement stems from two revolutions–the French and the American. In both cases, individuals who had never fought back were called upon to rebel against authority.

The idea and practice of human rights proved to be both an instigator and sustainer of revolution, and a source for radicalization of social change campaigns. The development of human rights opened space for new actors, working across what had been boundaries with different needs, interests and demands. Revolutionaries seized upon human rights to craft their demands for structural change and new patterns of human/government interaction.

The successful development of human rights required a major shift in how individuals perceived themselves. As Lynn Hunt observed: “Thinking and deciding for oneself…requires psychological and political changes as much as philosophical ones.”

Many commentators have discussed the political changes required for human rights to become rooted in a society: States cannot do what they want to their own citizens. States act as duty bearers, and the people are rights holders.

The exact contour of their relationship, however, remains contested. States now have a negative responsibility to refrain from doing certain things–like interfering with one’s choice of religion, ability to speak, and privacy at home. They also have other, positive, responsibilities–but those responsibilities are still being debated, at least in the United States (for example, healthcare, housing and employment).

The psychological shifts required to accept human rights have received less attention. Prior to their acceptance, individuals were born into circumstances that determined their degree of freedom. Moving out of one class and into another was rare and difficult. People were owned by, or at least controlled by, lords and kings–their master.

This arrangement worked in favor of those seeking security. Very little was expected other than obedience from servants, who were identified not as individuals with dreams and desires of their own, but by their position within their society.

In sharp contrast, the logic of human rights blasts these notions apart by making individuals the subject of their own lives. Agency. Bodily inviolability. Empathy. Dignity. These concepts are encouraged by human rights.

Consider this: For a long time, people used to gather in town squares for exhibitions of pain and suffering. They cheered on the hangman as he prepared the noose for the poor fellow who was already almost dead, having been nailed to a cross and put on display.

Today, although torture certainly occurs, it is done clandestinely–and we publicly condemn it. Why? Because human rights presume an individual’s right to bodily integrity, and we want to see ourselves as being on the side of human rights.

The UN and a post-war compromise

Flash forward to the creation of the United Nations at the end of World War II, when the United States was called upon to show what kind of human rights advocate it would be. Would it accept all human rights for all people? Or just some rights for some people?

In his fascinating book, Radio Free Dixie: Robert F. Williams and the Roots of the Black Power Movement, Timothy Tyson observes how the debate in the mid-1940s over the UN Charter’s human rights provisions gave African Americans a powerful podium from which to address race issues.

Human rights held promise in the United States where civil rights had failed. As Professor Carol Anderson observed in her book Eyes off the Prize: “Human rights…had the language and the philosophical power to address not only the political and legal inequities that African Americans endured but also the education, health care, housing and employment needs that haunted the black community.”

U.S. anti-racism advocates at the UN Charter negotiations in San Francisco in 1945 knew that without economic rights, civil liberties rested, at best, on quicksand. But at that time, any group or individual fighting for economic rights risked being branded communist. Afraid of losing what little they had, African Americans muted their demands for economic rights.

Support for anti-colonialist efforts also proved untenable for the U.S. delegation and its consultants at the Charter talks. Highly organized Nigerian students met individually with delegates and pressed for the words “independence” and “freedom” to be added to the Charter, along with a specific provision on colonialism. But outsides the confines of the negotiations, tensions were heating up between Washington and Moscow. The United States did not want to lose the support of any of its allies–or change the positioning of military aircraft that rested on colonized islands within striking distance to the Soviet sphere.

Thus a deal was struck between the United States and colonial nations. The names of the individual colony-ruling states would not be mentioned by name in the Charter, and the United States would support adding a slick little provision that for decades would prove to be an effective roadblock to human rights enforcement: Nothing contained in the present Charter shall authorize the United Nations to intervene in matters which are essentially within the domestic jurisdiction of any state….

Julie A. Mertus is a professor of human rights at American University and co-director of its Ethics, Peace and Global Affairs Program. She has been a senior fellow at the U.S. Institute of Peace, a fellow in human rights at Harvard Law School, a MacArthur Foundation Fellow, a Fulbright Fellow and a Counsel to Human Rights Watch. She is the author of five books, including Kosovo: How Myths and Truths Started a War and Bait and Switch: Human Rights and U.S. Foreign Policy.