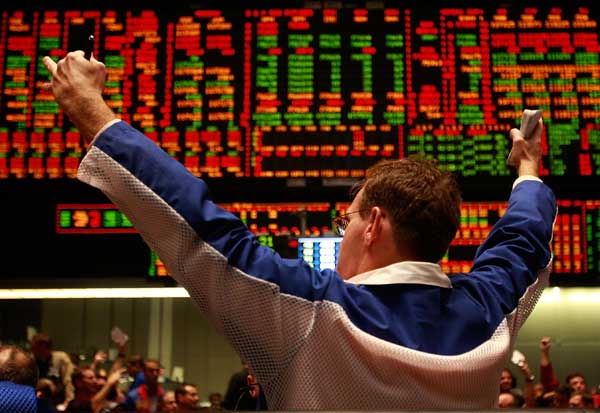 On Feb. 20, a trader signals an offer in the Standard & Poors 500 stock index futures pit at the Chicago Mercantile Exchange, after the White House calmed worries that the government would nationalize insolvent banks.

The Only Road Out of Crisis

Yes, it is socialism, but nationalize the banks already.

The federal government should maintain ownership of one major bank—a benchmark institution that would set standards that other banks would have to match.

Since taking office, President Barack Obama and his economic team have confronted a daunting financial crisis with a string of solutions that have been hard to sell to a wary public.

Obama’s first problem is that his administration’s bank rescue has failed to break with the discredited Bush administration plan–throwing taxpayer funds at insolvent banks to put off their inevitable nationalization by the Federal Deposit Insurance Company (FDIC).

On March 23, Treasury Secretary Timothy Geithner proposed the latest rescue for big banks, whose “legacy assets” of housing-based financial derivatives have tanked in value. Geithner’s Public-Private Investment Program (PPIP) tries to revive the market for these toxic assets by having the government insure their value.

Some major financial institutions, such as Bank of America and Citigroup, are what Princeton economist and New York Times columnist Paul Krugman calls “zombie banks.” They live as private entities only because of the endless infusion of government funds that swamp their private stock market equity value.

Despite this quasi-nationalization, the Obama administration did not initially demand equity shares and, thus, majority management control in these banks. And after the stock market reacted negatively to an April 19 New York Times report that the administration was considering coverting government-owned bank warrants (essentially loans) to common stock, the proposal has gone unmentioned. But even going through with this measure (which would shore up the banks’ balance sheets) doesn’t mean the government will demand control of the banks’ management.

Federal regulators are doing their best to hide the dire situation of our megabanks, thus delaying official acknowledgment of their insolvency. The regulators have let banks off the hook, sparing them from having to “mark to market” declining assets while allowing them to use the declining prices of their bonds (which will have to be paid off in full if held to maturity) to lower their total liabilities. Thus, the recent quarterly reports of bank profits are largely accounting fictions.

So far, the banks have gladly taken government funds, using them to shore-up their deteriorating balance sheets rather than to engage in renewed lending. A Wall Street Journal analysis published on April 20 shows the biggest recipients of taxpayer aid made or refinanced 23 percent fewer loans in February than in October–the month Treasury launched the Troubled Asset Relief Program (TARP). Although massive federal aid to financial institutions has failed to unlock the frozen credit markets, under PPIP, Geithner proposes to spend up to $1 trillion more in federal funds and insurance guarantees to create a “private market” for legacy assets.

“We cannot solve this crisis without making it possible for investors to take risks,” Geithner wrote in a Wall Street Journal op-ed.

Yet under PPIP, the federal government asks private investors (mostly the very hedge funds and private equity funds that speculated in these troubled assets in the first place) to risk just 7 percent of the purchase price of these assets. The federal government (that is, the taxpayers) will not only risk its own 7 percent but will also loan the banks the other 86 percent of the auction purchase price through the FDIC or Federal Reserve.

If the price of the asset has fallen more than 7 percent below the original auction purchase when the loan comes due in a few years, taxpayers will assume the loss on the value of the loan. That is, the public treasury will assume the risk on 93 percent of the private market purchase price, with the private sector risking only its original 7 percent investment.

Geithner knows that now there is no private market for these worthless assets–hence his plan to bribe private investors to get into the toxic-asset market. So much for a capitalist market that rewards successful risk and penalizes failure.

Here’s a better plan: Rather than continuing to pay inflated prices for toxic assets that cannot be sold on a truly private market, the government should simply take those assets off the books of distressed financial institutions, so that their balance sheets can be restored to health.

Just as in the Savings and Loan crisis of the early 1980s, the FDIC should take over insolvent banks and other financial institutions, place their presently valueless assets into a Resolution Trust Company and restructure the banks so that healthier balance sheets would support renewed lending.

Once the financial firms have regained their health, the FDIC could either resell them to private investors or the government could choose to run the banks. When, and if, the housing market recovers, so will the value of the toxic assets. The Resolution Trust Company could sell the toxic assets to private investors without expensive guarantees, and use the proceeds to repay the Treasury a portion of the funds the government infused into the banking system.

Critics–including conservative pundits and some moderate Democrats–claim the federal government does not have the capacity to run megabanks. But in practice, little would change in terms of the bureaucratic structure of the institutions. Nationalization only involves firing the top layer of management; mid-level managerial personnel would stay on, under the supervision of skilled FDIC administrators (recently unemployed bank managers would be glad to work for the FDIC).

Finally, rather than reselling all the restructured, nationalized banks to private investors, the federal government should maintain full ownership of at least one major bank. This bank could serve as a benchmark institution, setting standards for investment in community housing, alternative energy development and infrastructure that other private banks would have to match.

The disaster of deregulation

It’s one thing to fix the current crisis, but preventing a repeat will require reflection on how this happened in the first place. The disastrous experience of financial deregulation demonstrates that without public regulatory restraint, finance capital will engage in irresponsible acts of speculative swindling during financial booms and resort to excessively conservative lending during financial busts.

The deregulation of the financial industry has been a 30-year joint project of Republican monetarists and Democratic neo-liberals. This “free market” project began with the Carter administration’s deregulation of the Savings and Loans. It accelerated under Reagan’s gutting of the entire government regulatory apparatus, and culminated with the Clinton administration’s abolition of the Glass-Steagall Act, which had separated commercial banks from investment firms. Now, the very banks that create risky financial instruments also market these instruments to their own clients.

To restore a sane credit system, the federal government must first take the fiscally prudent step of nationalizing and restructuring insolvent financial institutions. Then the Obama administration must recreate an effective regulatory system for domestic financial institutions and cooperate with governments of other advanced and developing economies to build a global financial regulatory system that favors productive investment over speculation.

The other story behind our current economic crisis is global, neo-liberal capitalism’s race-to-the-bottom. Transnational corporations that scour the globe for the lowest labor costs fail to pay workers enough to purchase the goods and services they produce. Only if Chinese and Southeast Asian workers can form independent trade unions will they be able to force employers to pay them wages sufficient to consume the goods they produce.

In developed nations, with wages failing to keep up with productivity increases, workers went into debt to forestall declining living standards, which temporarily put off the impending global crisis of overproduction and underconsumption.

In the end, restoring a stable global economic system will require raising the floor under global living standards and working conditions and creating global regulatory institutions that insure that investment and trade benefit all working people.

The era of deregulatory free-market mania is crashing down upon us. We must revive the capacity of democratic governments to regulate the economy to serve people’s needs rather than the speculative desires of corporate elites to recover from the current global economic nightmare.