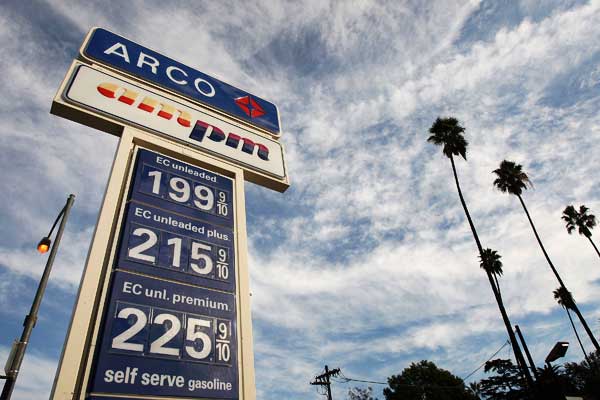 The inevitable decline of the world's fossil fuel supplies will push gas prices up.

Fossil fuels can’t last forever. A new book plans for a world without them.

One needn't accept the direst of Holmgren's scenarios to see the wisdom in rethinking our assumptions about the future.

The human mind almost seems hard-wired to expect the future to resemble the past. While this may be an artifact of our evolutionary history that served our ancestors well, in the complex and rapidly changing world we have created, it could prove a fatal blind spot.

David Holmgren has been considering the possibility of our civilization falling victim to our own growth for the better part of four decades. With fellow Australian Bill Mollison, he originated the permaculture movement in the 1970s, aimed at bringing the design of human societies in line with natural systems. In his new book, Future Scenarios: How Communities Can Adapt to Peak Oil and Climate Change (Chelsea Green Publishing, March), he suggests that the fast converging crises of peak oil and climate change may lead to a future far different from our past–a future of less energy, less complexity and more locally focused lives.

It would be unfair to classify Holmgren as a doomsayer. He surveys current energy and climate science and uses quantitative methods to outline possible scenarios of the future. While totally dismissing none (including total societal collapse and continued growth through technological breakthroughs), he sees our most probable future as one characterized by what he terms “energy descent.”

While he offers a nod to climate change, peak oil–or more precisely, peak energy–is at the heart of his argument. Holmgren summarizes the growing case that the world has reached or will soon reach maximum oil output. More controversially, he argues that production of natural gas will peak within the next couple years, with coal’s peak likely to follow around 2015.

Holmgren rightly views official government and corporate estimates of reserves of these three fossil fuels with skepticism. His sophisticated argument revolves around a clear and concise explication of net energy yield, a concept that escapes many energy experts. The basic idea is a sort of energy accounting, a balance sheet of energy return on energy invested (EROEI).

Holmgren calls this ratio “energy quality.” The EROEI of oil is extraordinarily large, so its energy quality is very high. The EREOI and energy quality of America’s principal biofuel–corn ethanol–is considerably lower, however.

“A society based on an energy source of [corn ethanol’s] quality would be constantly investing 62 percent of its energy back into the energy industry,” Holmgren explains, “leaving only the remaining 38 percent of the total energy in society for everything else–health, education, culture, food production, law, leisure, and so on.” Good news for Exxon Mobil perhaps, but not so good for the rest of us.

But it’s not just corn ethanol that makes it hard to be optimistic about our energy future: All alternative fuels currently under development offer significantly lower energy yields than oil, coal and natural gas. And the remaining reserves of those fossil fuels will yield less energy as time goes on, as the higher-quality reserves discovered decades ago in easily accessible locations are exhausted.

This analysis forms the crux of Holmgren’s contention that we face a future of energy descent. “When we moved from wood to coal and then to oil, the increase in power available to humanity was not just from the increasing quantity of energy, but also from the increasing quality,” he notes. An economist might rightly object that large investments in renewables will boost their quality. Even so, parity with fossil fuels appears a long way off.

If energy descent is our future, how will societies adapt? Holmgren offers four scenarios, which vary depending on the rapidity of energy descent and the severity of climate disruptions.

He writes that the best-case scenario of slow energy descent and mild climate change would allow adaptation through green technology, permaculture design and more localized economies. The apocalyptic worst-case scenario is defined by rapid energy descent and severe climate change. In between are combinations of the two, in which societies adapt to energy decreases and climate changes separately if one occurs more rapidly than the other. (Holmgren also suggests an alternative, nested model in which all four scenarios emerge simultaneously at the national, city/state, community and family levels.)

Holmgren’s scenarios are more like outlines than detailed portraits, and he acknowledges that real world developments would necessarily be more complicated. Still, he speculates that as energy descent and climate change intensify, technologically advanced societies–with populations accustomed to high-energy lifestyles–will tend to cling to aggressive, authoritarian political systems to maintain standards of living. On the other hand, Holmgren argues, less developed societies used to a less technologically intensive life might have an easier time adapting to a more democratic, green path.

Thankfully, this abstract discussion is somewhat fleshed out with a brief look at nations that have undergone marked prosperity declines in recent years, such as Russia, Zimbabwe, Argentina and Cuba, after the collapse of the Soviet Union.

Holmgren sees nested elements of all his scenarios in Cuba’s Special Period after 1991, during which the island nation lost its subsidized hydrocarbon supplies from the Soviet Union. While retaining its command economy and highly centralized state at the national level, principles of permaculture, sustainability and reduced reliance on automobiles helped the population cope at local and community levels.

Despite its title, Future Scenarios is more of a theoretical work than practical guide. Actual adaptation strategies communities might employ are suggested, but not well-fleshed out. Its discussion of permaculture as a form of adaptation was so brief that I found myself consulting Holmgren’s website to learn more.

In the end, the importance of this book is not so much in its descriptions of or prescriptions for energy descent. Rather, its importance lies in the insistence that we set aside our conviction that the future will look like the past. The emerging evidence of climate and energy science suggests that it won’t.

Since Future Scenarios went to press late last year, the global economic crisis has deepened and desperate measures have been implemented to revive an economic regime predicated upon cheap, abundant energy and infinite growth. That we might need to fundamentally change course in an era constrained by the effects of climate change and decreasing energy abundance finds no place in policy discussions.

Yet it’s become increasingly clear that our present course is unsustainable. One needn’t accept the direst of Holmgren’s scenarios to see the wisdom in rethinking our assumptions and planning for a different, and more difficult, future.

Mike Lynn is an activist and writer living in Chicago. He works with several organizations in that city, including the 1213 Group, which he founded. The group works on the converging crises of climate change, resource depletion, and water and food shortages.